The original Red Dead Redemption DLC Undead Nightmare is considered one of the best DLCs ever. It arrived at the most critical time as well; at the height of the zombie craze and right when RDR fans needed more content. Since Red Dead Redemption 2 has come out, fans have been wanting a follow up DLC or something similar. Well, be careful what you wish for because you just might get it. Recently, Red Dead Redemption 2 hackers have been terrorizing players with a spooky enemy. Players are reporting being attacked by two-headed skeletons. 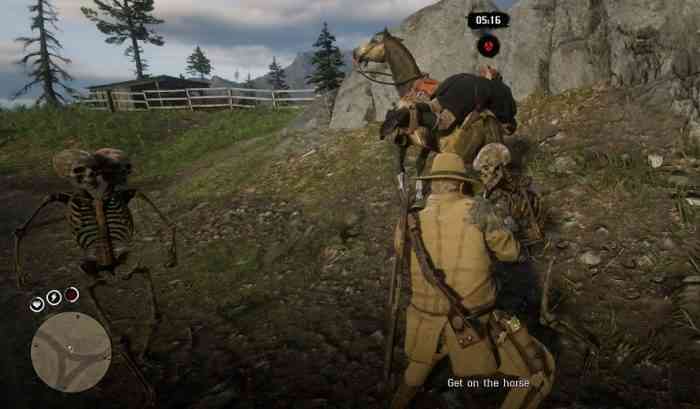 Like pretty much every distraction from a hacker, this enemy is made to give other players a hard time. They show up, become hostile, and appear to be invulnerable. From a video on Reddit, it attacks a player with hand to hand combat, can counter attacks, and cannot be harmed by guns; all traits of real-life skeletons! However, when the player draw his gun, the skeleton flees. Remember, the skeleton is more afraid of you than you are of them. Now, this skeleton asset is not from any DLC or event, but it is in the main game.

I got attacked by something I never expected from r/RedDeadOnline

The skeleton can be found in the wreckage of a traveling freakshow. It is inside a cage and appears to be wearing a dress. If you encounter one of these skeley’s, you can hogtie them. Players have reported success with lassos and bolas. You should also report hackers; they’re bad people. Red Dead Redemption 2 is out now on PC, Xbox One, PS4, and Stadia.

Have you encountered any skeletons in RDR2? Let us know in the comments below.