Brace yourself; we have video game movie news, and not the exciting Mortal Kombat kind. Certain video game movies have been locked away in pre-production purgatory, probably for the better. But Gearbox boss Randy Pitchford accidentally let loose some news about one such Borderlands movie, that was thought to be lost to the “let’s not” list of video game movies. In a quickly deleted tweet, he named Eli Roth as the director for this project. It had a picture of him and everything, so we can probably set aside any skepticism of legitimacy. 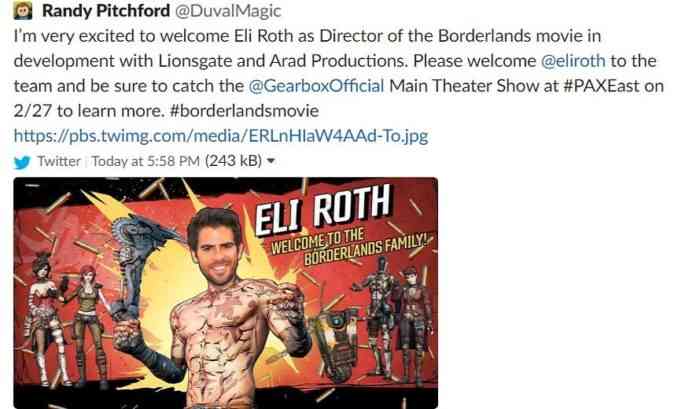 Actor/director Eli Roth is probably best known for direction horror films Cabin Fever, Hostel, and Hostel: Part 2, and his role as Donny “The Bear Jew” Donowitz in Inglorious Bastards. His horror films, especially Hostel, are known for their excessive gore, which can possibly lend itself well to the Borderlands universe, if it can be used in a comedic way like the games. The real issue of the movie is, well… the movie. Falling into the pattern of almost all video game movie failures, it plans to shoot away from the source material, like the body parts from a Suicide Psycho.

Apparently, the plot of the movie will follow Lilith, after she is hired by the Atlas Corporation CEO to find his daughter Tiny Tina, and her bodyguard Krieg. Somehow, Tina is revealed to have a key role in unlocking the Vault for Atlas. *Sigh* I feel sorry for any poor soul whose job depended on telling their boss that this was a good idea for a movie. This version of the movie was revealed back in June, so hopefully it has changed like, drastically, into something unrecognizable. The Borderlands movie will be in theaters… hopefully never.

What do you think would make a faithful Borderlands movie? Let us know in the comments below.


A New Tales from the Borderlands Game Is in the Works