Opening Cinematic Released for One Punch Man: A Hero Nobody Knows

Blurring the Lines Between Anime and Video Game

A couple of days ago, Bandai Namco released the opening cinematic for their upcoming video game adaptation of One Punch Man: A Hero Nobody Knows. It features numerous heroes from the manga and anime that fans will recognize, all shown off in a classic anime-opening style cinematic. Of course no anime-opening would be complete without a banging song to go with it. The song for the cinematic is Freaking Out! by JAM Project, who also did the opening music for the anime. 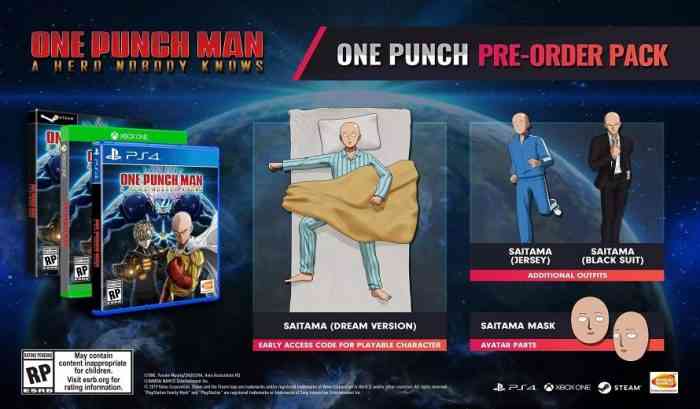 The cinematic opens with one of the heroes Mumen Rider facing the monster Deep Sea King, who quickly defeats Mumen Rider. Saitama then arrives to save him. Deep Sea King proceeds to attack Saitama, who engages with an attack of his own, appearing to be the Normal Punch. This obliterates Deep Sea King. After, a montage of heroes begins, panning between Tornado, Speed-o’-Sound Sonic, Genos, and finally, Caped Baldy AKA Saitama AKA One Punch Man. The trailer ends with Boros unleashing his energy and Saitama unleashing a punch that appears to clear the skies, making his attack visible from outer space.

One Punch Man: A Hero Nobody Knows can be pre-ordered for extra content. Saitama (Dream Version) is an extra playable character, and there are also additional outfits for Saitama; one in a tracksuit and one in a formal black suit. A Saitama mask is also available as an avatar part. A Hero Nobody Knows will be out on PC, Xbox One, and PS4 on February 28th, 2020.

Who are you excited to play as? Let us know in the comments below.

Suicide Squad: Kill the Justice League Is Center Stage at DC FanDome
Next
Perfect For Christmas Gifts Or For Yourself – Take Advantage Of The Top PC Deals On Games & Accessories
Previous
D&D Dark Alliance Releasing in Fall 2020