“What Does the Scouter Say About the Different Editions?”

Apparently, there is just not limit to how many games Bandai Namco will put out retelling the story of Dragon Ball Z. Just off the top of my head I can think of the Budokai series, Budokai Tenkaichi series, Xenoverse series, FighterZ, and now we have Dragon Ball Z: Kakarot coming out next month. But if people keep buying them, why should they stop? Just like every other major release, Bandai Namco has different Dragon Ball Z: Kakarot pre-order editions to squeeze out extra money. At least they give us a ton of options on how to spent our money. 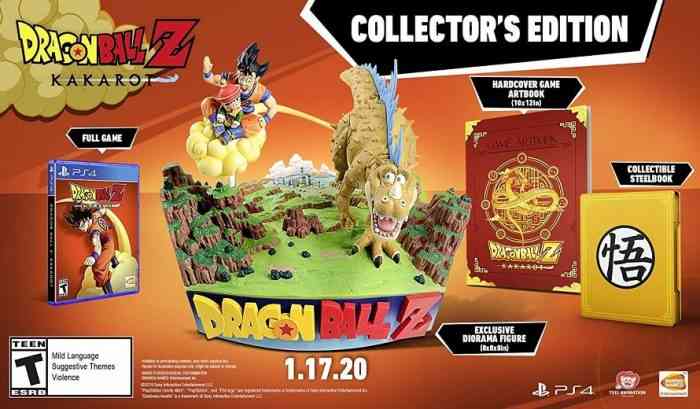 There are five editions including the Standard Edition. Pre-ordering any edition will get you early access to Bonyu’s Training, the Sub-Quest “A Competitive Party with Friends”, and a cooking item that boosts HP and melee ATK. The Deluxe Edition comes with the Season Pass (content which has yet to be revealed), the music soundtrack for the game, and a couple more cooking items. The Collector’s Edition is where things get pretty cool. It comes with a steelbook for the game, a hard cover artbook, and a diorama figure of Goku and Gohan riding the Nimbus next to a dinosaur. It is a familiar scene for those who have seen the original anime opening.

The FigPin Edition, which is a GameStop exclusive, comes with a collection of pins of Goku and all the major villains of the different sagas. These pins include Goku, Oozaru Vegeta, Frieza, Kid Buu, and Perfect Cell. The Ultimate Edition appears to only include digital content, which is fine for non-collectors. It basically comes with all the digital content of the other editions, plus a nod to one of the oddest modes of transportation in the Dragon Ball universe. It comes with the Tao Pai Pai Pillar, which was used by Mercenary Tao in Dragon Ball. It was basically just a large pillar that Mercenary Tao would pick up and throw to wherever he was going, and then jump up and ride it to his destination. It is unclear how it will be used in Dragon Ball Z: Kakarot, but it’s something. Dragon Ball Z: Kakarot will be available on PC, Xbox One, and PS4 on January 17th, 2020.

Which edition would you be most likely to get? Let us know in the comments below.