Red Dead Redemption 2 has only been available on PC for a few days now but players have already made tons of mods. One of those mods lets you play as a character that many Red Dead players didn’t believe existed: The missing Princess Isabeau Katharina Zinsmeister of Luxembourg. 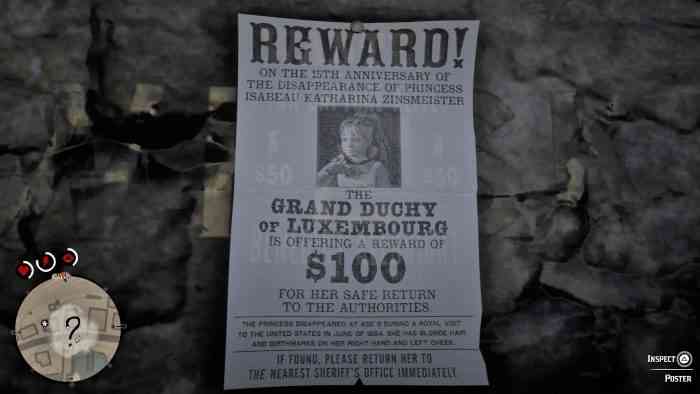 The missing person poster seen in the image posted above can be found on the front wall of a saloon in Van Horn Trading Post area in Red Dead 2. The decrepit, rundown town can be found north of the game’s New Orleans stand-in, Saint Denis. According to the poster, Isabeau was five years old when she went missing for 15 years and there’s a $100 reward for returning her safely.

Rockstar’s latest game has been out for more than a year and console players have been trying to find the missing princess for quite a while. Now, it appears that a Reddit user named “DaniMoz” has found an NPC model of the princess in the PC port’s files and has made her playable.

SPOILERS IKZ is in the game files, Using mods to play as her. This is what she looks like. from r/reddeadredemption

That said, since she has a character model and her own animations, that must mean she can be found somewhere in the game without a mod, right? Unfortunately, players have speculated that actually finding the princess is cut content and it isn’t possible to complete the mission. Oh well, at least you can see what she looks like in-game!

Blizzard Has yet to Apologize to Blitzchung for the Ban
Next
Pillars of Eternity 3 Will Have to Shake Things Up, Says Obsidian Director
Previous
Death Stranding Confirmed for Steam and Epic Games Store