This Game Knows What it’s About

tinybuild Games put out a new launch trailer for their game Streets of Rogue yesterday. The self-awareness of this rogue-like very apparent, and it bleeds through in this trailer. This game is all about choice; the choice to hit someone with a toilet and poison them with the water, or to play as a zombie and spread your infection, causing your own little outbreak. The Streets of Rogue launch trailer shows off the endless possibilities the game has to offer. The choices available to players are limited only by their own imagination. 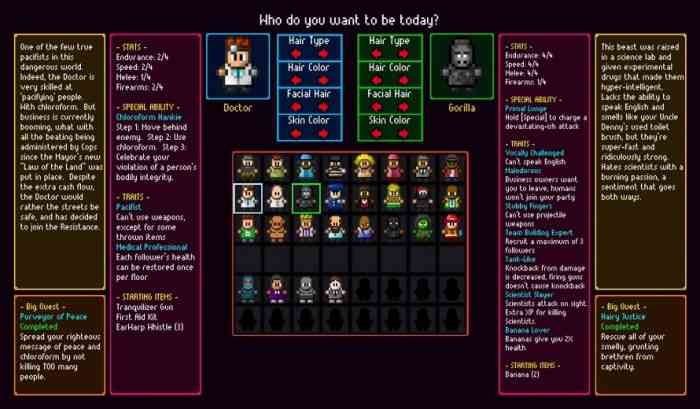 The trailer boasts the praises of various entertainment sites that describe it as a cross between [game A] and [game B]. In that same vein, this trailer is half infomercial, half pick-up truck commercial. The narrator brings in players by appealing to the different playstyles that Streets of Rogue can offer. Run ‘n Gun, stealth, tactical, or taking indirect approaches to solving your problems are all on the table. The trailer wraps up with showing off the different ways players can customize their character and experience.

Streets of Rogue left Steam Early Access yesterday and is now $22.79 on Steam. For $30.57, customers can get the Collector’s Edition which includes the game, soundtrack and the Making of Streets of Rogue. Streets of Rogue is available for PC, Nintendo Switch, Xbox One, and PS4.

Are you picking up this game? Let us know in the comments below.


Naughty Dog Releases Final Last of Us 2 Trailer Before Launch