We Must Protect the New Dwellers!

With Fallout 76’s battle royale mode Nuclear Winter, Bethesda is expecting more players to be visiting the Wasteland for the first time. The Fallout 76 patch 11 has a lot to do with making sure those new players are not beaten down right off the bat. For more veteran players, Bethesda is also implementing some much-requested features as well. These quality of life improvements will hopefully keep the favour of the players. Will players miss the challenge and the accompanying excitement from making new characters? 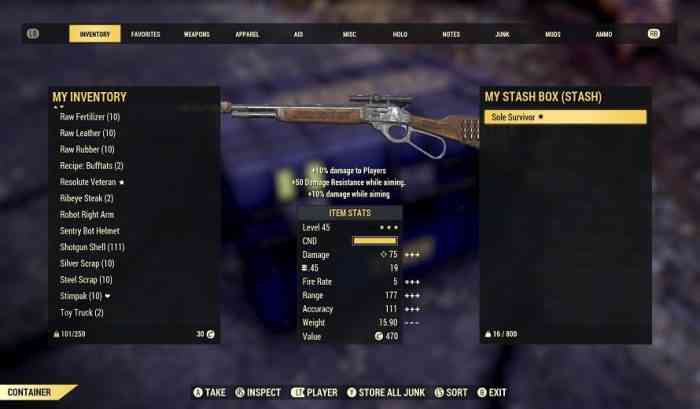 For new players, some things are a little more forgiving than for higher level characters. For instance, players under level 25 will be able to fast travel for a reduced price. Players under level 15 will be more resistant to disease. Bethesda is also adding more early challenges with rewards and items to give these new Vault Dwellers a better shot at surviving. Some of the areas surrounding the Forest will have creatures with reduced difficulty so that players will not be confined to the Forest.

Some quality of life changes include having legendary items and recipes fully display their descriptions. All attributes on legendary weapons will be listed instead of just the first. When crafting, the resulting items will be displayed in the menus. Speaking of recipes, raw food and fluxes will now have a 50% increased lifetime before spoiling. Fast Travel will also not reduce condition on food and drinks. Bethesda has also made changes to how Auto-Scrapping works and the Power Armour HUD options. You can view all the changes on Bethesda’s blog.

Has Bethesda addressed any of your specific concerns with Fallout 76? Let us know in the comments below.