Pokemon Rumble Rush, a new entry in the popular Pokemon sub-series, has been announced. It is already out for download from the Google Play store on Android devices in Australia, with iOS devices and a worldwide release coming shortly. 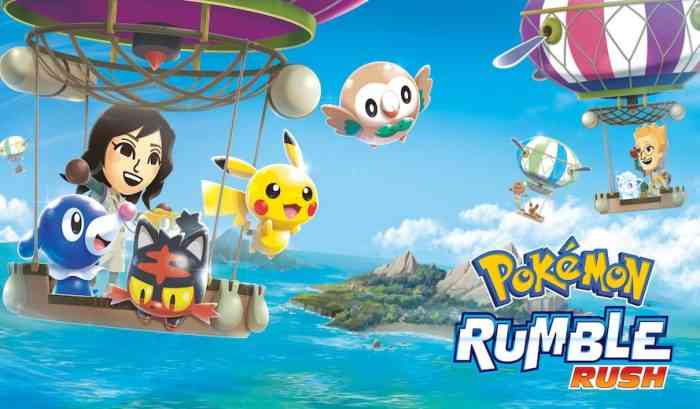 Announced by The Pokemon Company International, Pokemon Rumble Rush is a “free-to-start beat-’em-up” where players take control of an adventurer to discover new islands and its Pokemon inhabitants. Just to be clear, this is different from the new game coming from DeNA.

Below is a description of the game:

“In Pokémon Rumble Rush players assume the role of an intrepid adventurer tasked with discovering new islands and the various Pokémon that inhabit each area.  As they explore each island players must overcome the hordes of enemy Pokémon that stand in their way.  By tapping the screen, the players’ partner Pokémon will rush in and attack each oncoming wave. During each of these encounters, there is a chance one or more of the Pokémon will befriend a player and in turn, use those Pokémon in future battles. Each island adventure features Super Boss fights and, if victorious, players have the chance to get items that power up their Pokémon.”

It wouldn’t be a Pokemon game without a huge number of Pokemon to find and battle, right? In Rumble Rush, there are hundreds of different species of Pokemon, including Legendary and Mythical types. The more you explore the land and participate in special events, the more Pokemon you’ll find. Also, when you find an undiscovered stage through exploration, players get to rename it as a reward. Cool!

When exploring, a handy hint function will display any Pokemon around you. Also, when viewing the map, you can tap a passing by hot air balloon which will let you play a stage that other players have found in hopes to find even more pocket monsters.

What are your thoughts on Rumble Rush? Let us know down below.


TemTem for PS4 and Xbox One Cancelled, Will be on New Gen Instead