One Last Enter the Gungeon Update – A Farewell to Arms

Three years ago on April 5th, developer Dodge Roll released the proceedurally generated bullet-hell Enter the Gungeon. The charming game is loaded with hundreds of different weapons, many of which are in reference to popular video games and movies. Enter the Gungeon has seen two major updates over the past few years; the Supply Drop Update in 2017 and the Advanced Gungeons and Draguns Update in 2018. On it’s three year release anniversary, we will see the next and final Enter the Gungeon update. It will be aptly titled A Farewell to Arms. 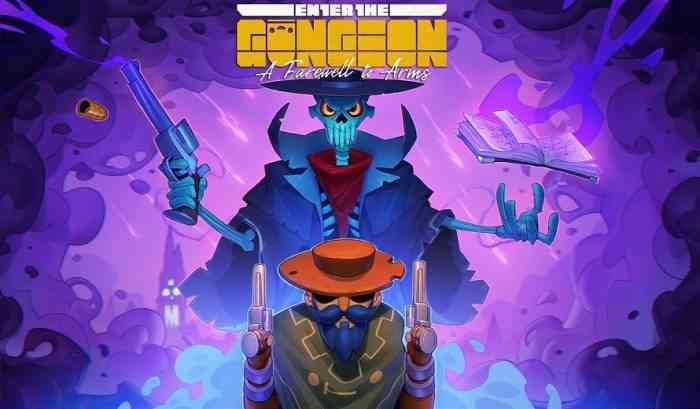 Yesterday, Dodge Roll tweeted the update’s artwork. Dodge Roll designer Dave Crooks also posted an announcement on PlayStation Blog. He explains why this update that was expected in 2018 was delayed. It was because they wanted to add more and more content, which is never a bad thing. Originally planned to be a paid DLC, A Farewell to Arms is now going to be a free update. It will add two new Gungeoneers to play as, a new floor, a new boss, and of course, new guns. Crooks says the update “carries the weight of the end of an arc, the very legacy of the game. That is to say: we wanted to make sure Enter the Gungeon went out with a bang.”

As players RIFLE through the content, BARRELing towards the additions, SCOPE out the new floor, it will become abundantly clear that Dodge Roll AIMS to please. When the update FIRES off, we will make sure to BULLET point the details. If you do not see the above images, be sure to RELOAD the page. We wouldn’t want anything to TRIGGER displeasure among our TARGET audience.

Will you be playing A Farewell to Arms? Let us know in the comments below.