I Think Stardew Royalley is a Better Name

Just like Fortnite, GTA Online, Call of Duty, and everything in between, Stardew Valley has jumped on the battle royale bandwagon. Not officially, however. Battle Royalley (the Stardew Valley battle royale game mode) is a mod. Piggybacking off the multiplayer update, modder Ilyaki created a mode in which up to 100 players can engage in all out battle: “Last farmer standing wins”. In the 2D space, Battle Royalley uses Fortnite-esque building strategies to make cover and obstacles on the map. Chopping down trees and making fences works just as it would in the vanilla game. 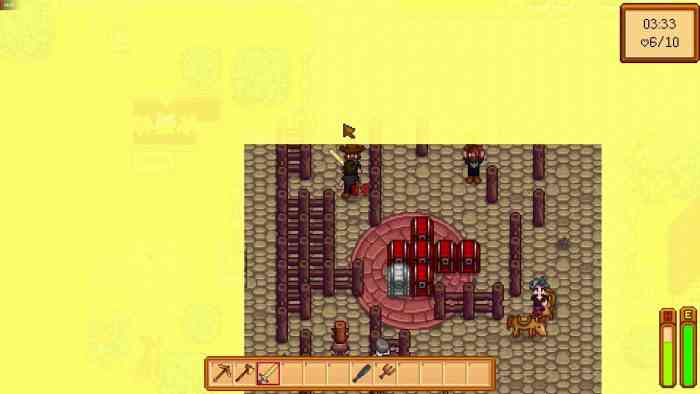 From what the download page for the mod tells us, there is no Battle Bus or airplane to jump out of. The spawn points are set, but where players will begin the game is random. Chests also randomly spawn in set locations. From these chests, players can pick up swords, bombs, slingshots, food, hats, and horses. How they fit the horse into a chest, I don’t even want to know, but it does make for getting around the map easier.

Ilyaki has made this mods available on NexusMods for anyone to download. Judging by the screenshots, the play space is restricted to Pelican Town, so the mines, the players’ farm, and the desert seem to be off limits. Despite it’s 100 player game limit, the mod has been uniquely downloaded less than sixty times. Perhaps the overlap of battle royale competitors and Stardew Valley fans is minimal. The mod seems to work well enough, so accessibility probably isn’t an issue. however, it has only been around for a few days at this point.

What do you think about his mod? Has Battle Royale just become a meme at this point? Let us know in the comments below.