Praise the Sun and all that

The Dark Souls games have been a great source of fun and punishment (funishment?) since they came out starting in 2011. Eight years later, publisher Bandai Namco decided to bundle the games in the Dark Souls Trilogy Collector’s Edition. The trilogy was originally released in the US in October of 2018, but this one has stuff! Like, a lot of stuff! The European release is delayed until May of this year, so the Collector’s Edition might be Bandai Namco’s way of apologizing, but you’ll still have to pay a buttload of cash. 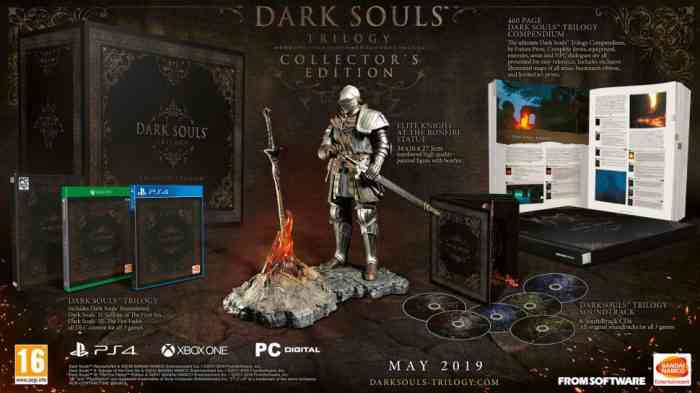 Speaking of cash, the price is… woof, up there. The Collector’s Edition clocks in a $580/£450. The games themselves come with Dark Souls: Remastered, Dark Souls II + all three DLCs, and Dark Souls III with both DLC packs. That’s what the original trilogy held. The additions include a 27″ painted knight figurine with an Estus bonfire, Six CDs with all the games’ soundtracks, and a book. Not just any book though. This is a collection of the bestiary, key item descriptions and notes, maps, and scripts of the NPC dialogue. That is a ton of stuff.

Is it worth it though? Obviously, this collection is meant only for the hardest of core fans. There are only 2,000 of these being released, so there’s the limited number. But let’s compare prices of the releases. $580 for the Collector’s Edition, but the regular trilogy can be bought from anywhere between $90 to $110. That’s an average difference of $480. Is there $480 worth of extra stuff in that box? For some people, you can’t put a price on memorabilia like this, but obviously there is a price, so… We’ll leave that judgement to you.

Is the Collector’s Edition worth it? Will you be eyeing one? Let us know in the comments below.