Fallout Mad-ness is Spreading… as in Anger

It’s like Bethesda is falling down stairs and can’t stop itself. The amount of controversies surrounding Fallout 76 is staggering. Add another to the pile. Nuka Dark bottles are not bottle-y enough. Let’s take it back, way back, to before Fallout 76 was released. Many moons ago, when we as a society looked to the horizon with hope for the online Fallout game, Bethesda foretold of a rum drink they would release. Fans rejoiced as the fictional drink Nuka Dark from Fallout 4 was being brought to life. When Fallout 76 was available for pre-order, so too was Nuka Dark. 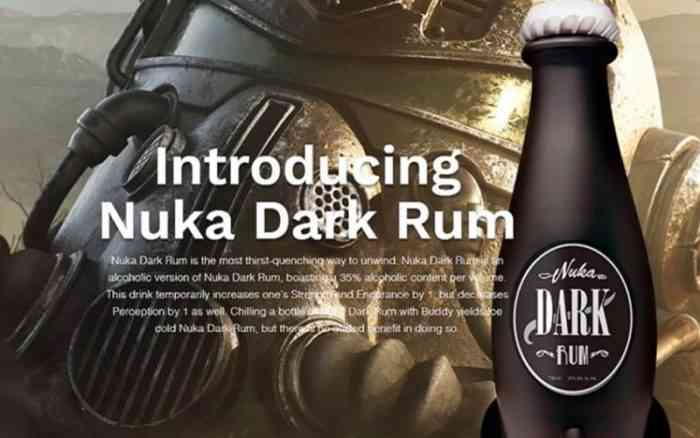 Fast forward to the present. The wasteland is not as fun as fans thought it would be. It’s not even as fun as it is in the world of Fallout. Understandably, people were upset that they had been sold a game that was not finished. Soon after, they were upset that their canvas bags in the Power Armor edition were nylon. Okay, that is also understandable. They were advertised as canvas; they should be canvas. Now, fans are receiving their orders of Nuka Dark, and they are not pleased.

An Atom Bomb of Disappointment

Outrage is erupting over the fact that the drink is not in a glass bottle. Now, technically it is in a glass bottle, but the glass bottle is encased in a plastic bottle shaped to the look of a Nuka Cola bottle in the game. Fans are claiming that they were deceived by pictures of the drink, which to my eyes look very plastic-y. I understand that if I was expecting a high quality glass bottle, as pictured in the game, I would be disappointed. I also understand that this is a novelty item, a replica, not a large scale manufactured product. Then again, I didn’t buy the game or any of the memorabilia, I’m just watching from a safe distance.

What do you think of this new pothole in the road for Bethesda? Do you think fans are overreacting? Let us know in the comments. And be sure to stay up to date with all our Fallout 76 news on our site.