The Actor Behind the Default Fortnite Dance says, “They Jacked That Shit”

Donald Faison is an actor that appeared on the hugely popular TV show, Scrubs. The show is actually where he first performed a dance that’s become synonymous with Fortnite, a fact unbeknownst to many. He recently shared his thoughts on the Fortnite Dance, during the Vulture Festival in Los Angeles. 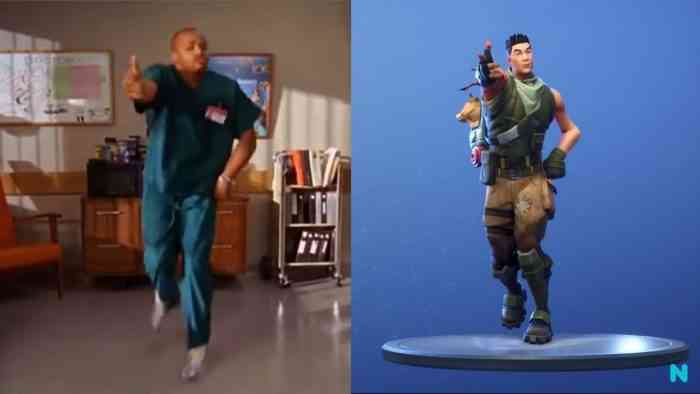 Fortnite by Epic Games has become a library of pop culture choreography. There are a ton of dances players can buy and unlock, and they’re quite popular among the younger generation. Just look up a few YouTube videos and you’ll immediately get the picture. Well, when the game released in 2017 as Fortnite: Save the World, everyone could bask in the same default dance emote. Little do people know that that very dance debuted as an improvised piece during the fifth season of Scrubs. The episode “My Half Acre” is in fact where Faison introduced the world to his moves.

Like many artists who’ve levied complaints against Epic Games and Fortnite, Faison isn’t receiving any royalties for his killer moves. The Scrubs cast recently had a reunion, their first in a decade, in which the topic of Faison’s dance entered the conversation. According to him, the video game developer and publisher actually reached out to him about the use of his “choreography.” Unsurprisingly, the audience tried to spur him into performing the dance emote. “If you want to see it, you can play Fortnite, because they jacked that shit!” he said.

In a similar news story, rapper 2 Milly revealed his plan to sue Epic for the use of his dance without forwarding royalties. He calls their “Swipe it” emote a complete rip-off of his “Milly Rock” move. And prior to that, Chance The Rapper highlighted the issue when he took to Twitter, saying, “Fortnite should put the actual rap songs behind the dances that make so much money as Emotes. Black creatives created and popularized these dances but never monetized them. Imagine the money people are spending on these Emotes being shared with the artists that made them.”

What are your thoughts on the matter? Do you think dance creators should receive royalties from Epic Games? Comment down below.