Nothing More About 60 Parsecs! Yet, Though

Robot Gentleman‘s 60 Seconds! has sold one million copies! An admirable milestone for a studio of any size, the developers have decided to celebrate with a fresh batch of announcements regarding their timed and terrific survival series. More content is incoming for Seconds! while a tiny bit more information is inbound for Parsecs! 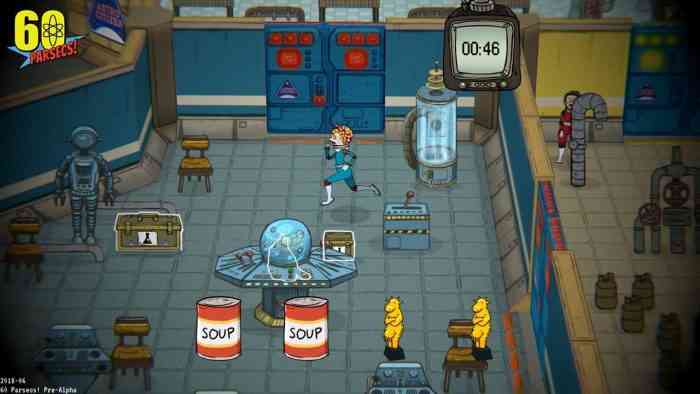 60 Seconds! is getting, among many other things, Steam Workshop support. It seems like a small thing, but it basically amounts to making your own version of the game. That’s happening in 2019. Dolores is getting her own DLC in 2018. Cats are also getting their own DLC this year. The Rocket Science DLC is coming to the Android and iOS versions of the game. Last but not least, Seconds! will be hitting even more consoles next year. Honestly that Workshop announcement sounds amazing, assuming you have the patience to literally craft your own Seconds! adventure.

On the other hand, we’re still pretty light on details for Parsecs!, the follow-up adventure set in atomic age space. Although the team did reveal some new screeenshots, some of which show off the scavenging mechanics. The shot above showcases the infamous soup cans, as well as what appear to be some golden idols. It’s a little weird, but that’s what I’ve come to expect from Robot Gentleman at this point. Regardless, I’m still pretty curious about what the final product is going to end up like.