In Shadow of the Tomb Raider, Lara Croft Looks More Dangerous Than Ever

The Next Tomb Raider Has A Dark, Brutal Atmosphere

Lara Croft looked more badass than ever in the E3 2018 showing for Shadow of the Tomb Raider. Check it out the new gameplay footage below!

In this new gameplay, we see the new stealth kills that Lara can pull off with a rope arrow and also by sneaking around in foliage. We also see that she can now cover herself in mud in order to blend in with her jungle environment.

Lara apparently also has a new arrow type called “Fear Arrows” and these can cause enemies to shoot each other and will eventually kill whoever is unlucky enough to get hit with them.

The crafting system that was introduced in Rise of the Tomb Raider also makes a return and the stealth system used in that game seems to be the same one that’ll be used in the sequel. 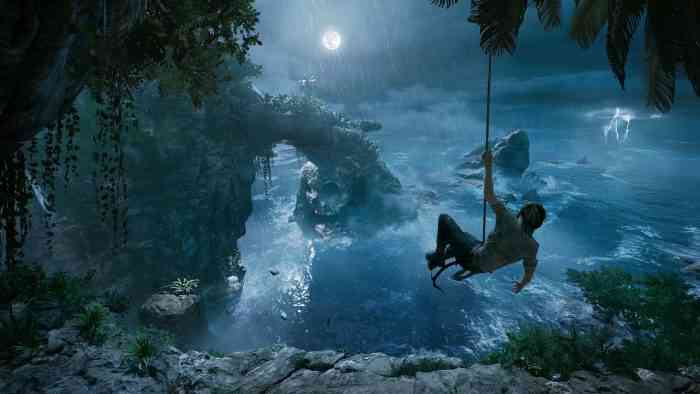 Generally speaking, this brief showing gave off a dark, brutal atmosphere that was apparent in the previous games but seems more pronounced in this new game.

One of the directors for Shadow of the Tomb Raider emphasized how vast the open-world hub will be and mentioned that there’ll be a hidden city in the game along with several tombs for players to explore.

If you want to read up more on the upcoming sequel then take a look at a preview we posted a little while back.

What do you think of this recent showing for this game? Should they have shown more or are you satisfied? Let us know your thoughts in the comments section!

Shadow of the Tomb Raider launches on September 14th for the PC, Xbox One & PS4.

The Anomaly, Ascension, and Apocalypse of Outriders: Worldslayer
Next
‘Babylon’s Fall’ Is An Upcoming Title from PlatinumGames
Previous
Yep, Battletoads is Officially Returning on Xbox One