So here’s a story of World War II that dips its coat of paint into the realm of lost innocence. My Memory of Us: Life’s Little Pleasures is a side-scrolling puzzle-solver set in occupied Warsaw. Though it deals with heavy themes, it utilizes fictional elements to soften the blow of history. Here’s a brief glimpse.

As you’ll note, My Memory of Us tells the tale of a boy and girl in Nazi-occupied Warsaw. In-game, it is simply called The City, and your goal is navigating its horrors following its artificial split into two sections. Much like Steven Spielberg’s Schindler’s List, the art is black and white with distinct colors in certain areas. During their misadventures, players will find antagonists on the form of the Evil King and his army of robots. The question is, can the bond between the boy and the girl carry then through evil?

“My Memory of Us is a game dedicated to those before us, including our own family members, that were separated during WWII, but fought to overcome unimaginable horrors armed with their love and belief that one day they would be together again, in this world, or the next,” said Mikołaj Pawłowski, CEO, Juggler Games, in a press release. “What makes our game stand out is that the story is told from the perspective of two innocent friends who complete each other. Each possessing their own unique abilities – she can run fast, he can sneak – but only when they work together can they overcome adversities.” 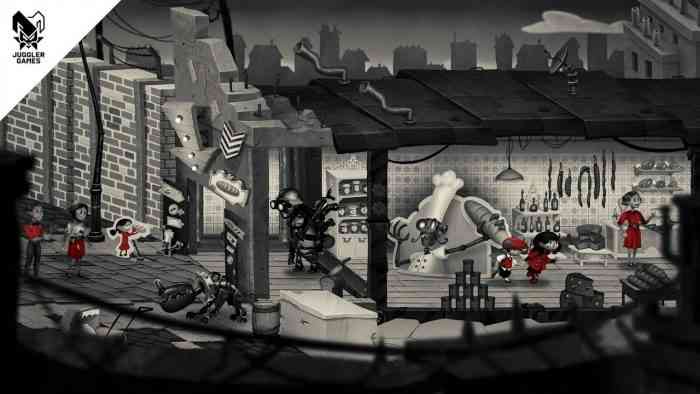 Below you will find the list of features for the game. So far, we know it will arrive at some point Q3 of 2018. Stay tuned for updates as time goes by.