Twitch Plays Pokémon Returns for Its Fourth Anniversary, but It Lacks the Same Cult Following

As the anniversary of Twitch Plays Pokémon rolls around again, the channel (TwitchPlaysPokemon) has gone live again, and this time gives the viewers the change to play through both Pokémon Red and Blue at the same time. The channel is still live as of writing, but the highlight of the series is arguably the players stumbling upon the glitched Pokémon: MissingNo. 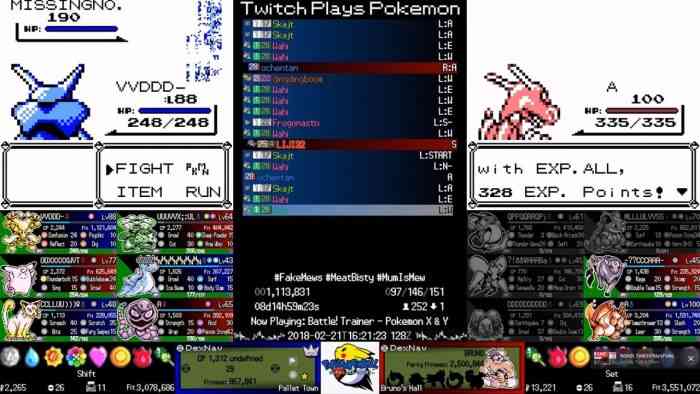 To celebrate its fourth anniversary, the channel is doing a split run of the original two Pokémon games. In order to participate, viewers of the channel communicate via the chat by typing in specific commands to make the in-game character move, select an attack, or accidentally discard a beloved Pokémon. As you may have guessed, it gets hectic at times.

Check out the players finding MissingNo below!

MissingNo is a glitch that appears in both Pokémon Blue and Red if the player goes through the proper steps for it to show up. It is unlikely that you’ll come across the Pokémon by accident. The process of finding the elusive glitch isn’t easy, either, so the fact that hundreds of players trying to play simultaneously managed to uncover it is very impressive.

One factor that may play into Twitch chat finding MissingNo is the drastic lack of participants that are playing this time around. When TwitchPlaysPokemon first started back in 2014 it averaged out at 80,000 players watching at one time, whereas this time there are only a few hundred participating.

However, despite the lacking viewership, the players have still been able to perform some fantastic feats, such as trading with themselves across the videogames and obtaining an Alakazam, a Pokémon you can only get via trading. Twitch Players Pokémon does also still hold the Guinness World Record for having “the most participants on a single-player online videogame”.

Will you be participating this time around? Let us know in the comments!