Murderous Pursuits Connivingly Cuts its Way to Steam this March

Blazing Griffin attempted to announce their new IP, Murderous Pursuits. They are no longer with us on account of having too much fun with the game, but everyone else will have their chance to discreetly dispatch targets in high-fashion this March. 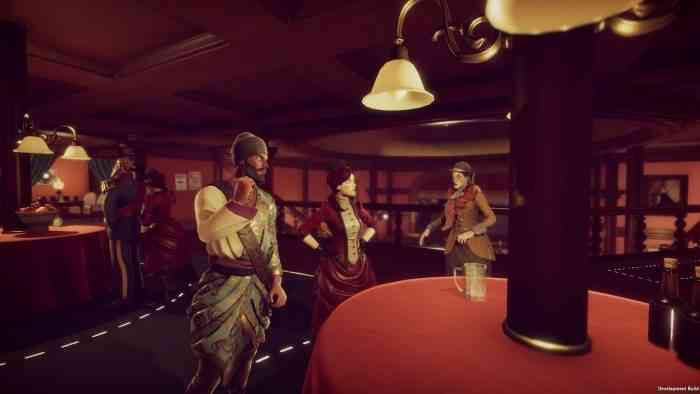 In Murderous Pursuits, the literal name of this game is murder. We have a meticulously contrived stealth title that facilitates lethal competition between 1-8 players and/or NPCs. After you locate your quarry among high-class crowds, you must look for ways to discreetly eliminate them. That is to say, this game shall solicit your cunning and wit better than most. And what better way to spur murderous intent than to set you amidst Victorian high society?

Part of the fun of Murderous Pursuits is developing a strategy, as well as a means, to sending your target into the next life. The key is not raising awareness. Among the tools at your disposal are vignettes, and through vignettes, players can blend in to via the haughty activities of affluent folk. Whether it’s lauding art or conversations of third-world exploitation, there’s always an engagement through which you can mask intent. Then, when you’ve orchestrated the perfect plan, execute your target. Beware, however, because you may just as quickly find yourself on the proverbial chopping block.

Whereas in a game like Clue, you find yourself in a ‘whodunit’ situation, in Murderous Pursuits, it’s an ‘I better do it before someone else does it to me’ situation. You must stealth your way to the top -kill your quarry while countering other assassin participants. While you have sharp, blunt, and ballistic tools at your disposal, so too do you have assets like disguises and flash grenades to counter other players. The more creative and discreet your assassination, the better.

It’s a PvP murder mystery that you can find on Steam this Spring. Stay tuned for bloody updates.