If you’re a fan of the Adventure Time TV series, you know the pain that comes with seeing an announcement like this. For some reason, it is impossibly difficult for any developer to make an Adventure Time game that does the source material justice. Instead, we’ve gotten a flat-eyed parade of shoddy games that suck the life out of Ooo in short order. Fingers crossed that this upcoming release breaks the cycle, in other words. 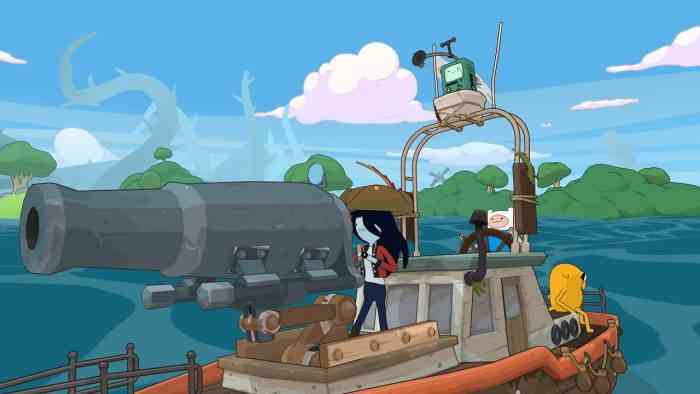 The aforementioned game, Pirates of the Enchiridion, will be an open-world pirate adventure starring Finn, Jake and a smattering of other characters. You’ll interrogate people for clues, engage in tactical combat and dive into a progression system for each of your heroes. The various territories of Ooo have been divided by floodwaters, facilitating your need to take up pirating. If nothing else, next spring seems like a pretty good time for such a game to come out.

There’s precious little else to go on in terms of the plot, though this will apparently be an original story. Pirates of the Enchiridion will be out next spring for PS4, PC, Xbox One and the Nintendo Switch. Outright Games and Climax Studios are holding a contest to decide the name of Finn and Jake’s pirate ship, which you can enter here. I love both pirates and Adventure Time, leaving me cautiously optimistic about this one.

Jimmy Fallon Is Coming to Fortnite
Next
Nintendo Files A Patent For Robot Legs, DO NOT PANIC
Previous
Yooka-Laylee Finally Out On Nintendo Switch