Turn-Based Fantasy Strategy Game Utawarerumono Will Be Releasing Two Games: Mask of Deception and Mask of Truth in 2017

Japanese based game developer/ publisher Atlus (Demon’s Souls, Catherine) has announced that one of their popular “SRPG” games: Utawarerumono will be coming to the west in just a couple of months.  Western and Eastern SPRGs alike have been gaining popularity among gamers in the last few years. SPRGs are games like Fire Emblem or XCOM that mix turn-based strategy with RPG elements and a huge overarching story line. Generally called TRPGs in the west, (for tactical role-playing game) this genre does well on console and handheld alike, (think Final Fantasy Tactics and Advance Wars.) 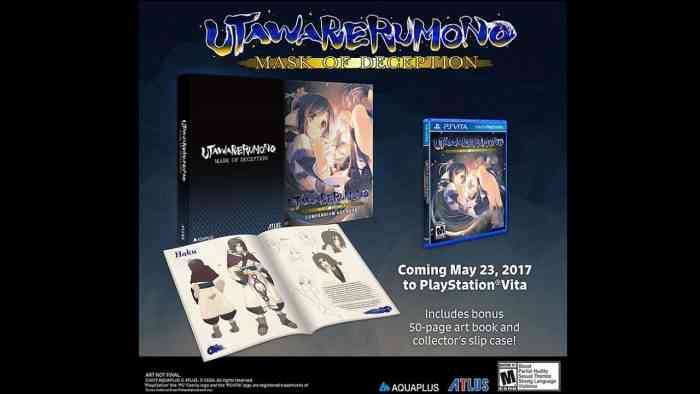 Atlus will be releasing not only one title but two in 2017. PlayStation users, whether on Vita or console, will be able to play Utawarerumono: Mask of Deception starting May 23, as well as Utawarerumono: Mask of Truth later in the year. Physical copies of the console games will drop in the Americas as well as Europe, but Europeans will be unable to get a physical copy of the Vita version of the game, though it will be available for digital download. If you are a fan of tactical RPGs then this is a title you won’t want to miss. Just check out the trailer below for a taste of the story and a glimpse at combat:

If you live in the Americas, you can grab a limited edition copy of Mask of Deception while supplies last or by pre-ordering the game. For no extra charge, this edition contains an exclusive slip cover for the physical copy of the game as well as a 50-page compendium featuring concept art, world lore, character backgrounds and more! The PS4 version will run $49.99 US and the Vita version will be a little cheaper at $39.99 with comparable prices in Europe.

Cyberpunk 2077 is Absolutely Gorgeous on PS5