XSEED Games proudly brings us the next installment of their euphoric farming simulator franchise: Story of Seasons: Trio of Towns. It has come to the Nintendo 3DS system in North America, celebrating 20 years of Bokujo Monogatari – the series’ original namesake, now Story of Seasons in the West. Celebrate with XSEED Games, part of Marvelous Inc., by watching the new Launch Trailer down below:

Mixing farm simulation with immersive RPG elements, Story of Seasons: Trio of Towns represents a labor of love for the fans. “They (the fans) are a wonderful bunch with a natural tendency to nurture,’ said Yoshifumi Hashimoto, producer of the Bokujo Monogatari series at Marvelous Inc. of Japan, “and I have been humbled by their outpour of support over the last 20 years. We craft each new Story of Seasons adventure with them at the forefront of our minds, and my sincerest hope is that fans both new and returning will appreciate what we’ve added with Trio of Towns.”

Setting in Trio of Towns is very much as it sounds. Players are set between three diverse locales where they can explore each of the uniquely-themed landscapes in a game that expands on previous titles by adding more rural engagement. As you grow crops, you grow friendships. Build your home to your liking, decorate, interact, and romance your local lad or farm girl. Furthermore, communicate and trade with other players, then enhance items on the mysterious multiplayer island. Players can even boost their progress with four Super Mario Bros. themed costumes based on iconic characters Mario, Luigi, Princess Peach and Toad, each with its own player-amplifying effect. That’s just a bonus to the myriad of activities found in game. 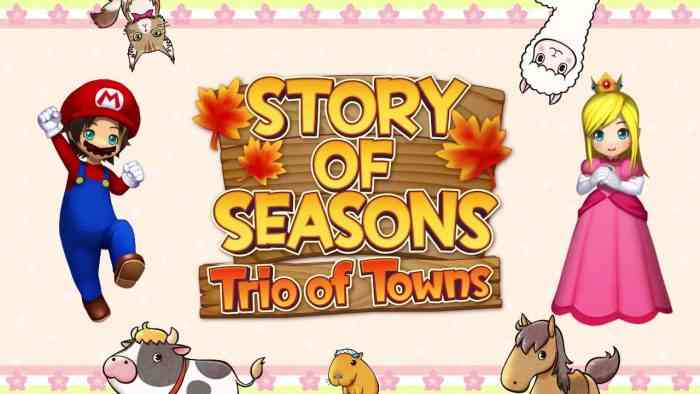 So build your own farm today and start growing. Story of Seasons: Trio of Towns can be found on shelves and digitally for $39.99, cheaper if you buy with Amazon. But there’s not need for commitment just yet, because you can read our review and learn all you need to know. Then come back for more of the latest gaming news. Have a glorious day.