And What a Classic Mass Effect Pairing It Is!

In case you did not remember, Mass Effect: Andromeda is on its way. However, despite the upcoming release date not much has been confirmed in the way who are our romance options. This has been left mainly to speculation. Fans have been told that the romance progression is receiving a complete overhaul, but no names. But now we have confirmed a romance, Peebee! Our plucky Asari squad mate. 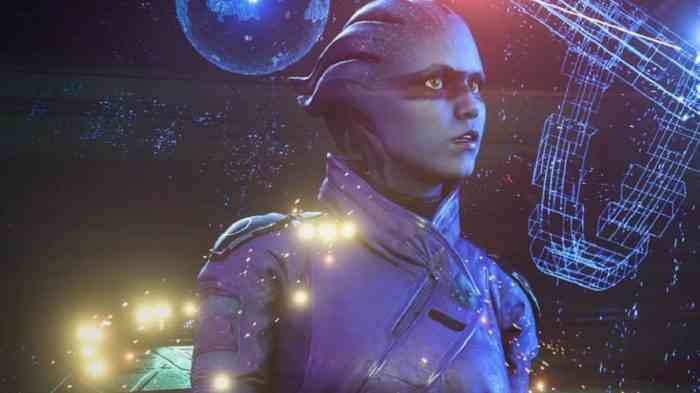 The question arose due to the recent character profiles Bioware is releasing as we approach the release date for Andromeda. There has already been two character profile for two human squad members: Liam Kosta and Cora Harper. The newest one covered Peebee, and in it, we get the chance to learn a bit more about Peebee and just what drives her. Peebee’s voice actress, Christine Lakin, gave insight into the plucky Asari character she gets to play.

She discussed how she feels about the character, and the Bioware website states that Peebee, “walks to her own daredevil drumbeat and has an unrivaled thirst for adventure. She’s pathologically independent but manages to maintain a loose, even friendly spirit.” The statement that sparks the question of romance possibility was when Lakine commented on her character’s ability to “fall in love”.

Fans immediately began to speculate, and now we have an official confirmation!  Though it has not been revealed which Ryder twin (or both?) Peebee can become attracted too, Producer Micheal Gamble did confirm the rumor via Twitter.

This is a very classic romance option, long time fans of Mass Effect will, of course, remember Liara T’soni. She is the original Asari romance option that spanned the entire Mass Effect trilogy. But from the sound of it, Peebee will be a refreshing adventurous take on the Asari and the way the players romance her will be different as well.

Creative Director, Mac Walters, has mentioned how the new romance progressions in Andromeda will be “less formulaic” and that the team’s new goal was “trying to find that more natural way into what a relationship would be like within the constraints of game development. We’re trying to make it as open-ended as possible.” So who knows how Peebee will react to our wooing. So in conclusion, we now know we have the option of mind melds in our future.

You can learn more about Peebee in the video below and let us know what you think in the comments.

Battlefield V 7.1 Update Irons Out Bugs, Adds Cosmetics
Next
Kojima Talks Shop About Death Stranding And Its Future With Sony
Previous
Tekken 7 Is a Beast and Requires a Massive Amount of Free Space on Your PS4