Inner Chains looks utterly terrifying. Built on the Unreal 4 engine its atmosphere screams creepy, crawly, gruesome and gory and it’s now launched its full campaign over on Kickstarter. At a mere $10,000 the team from Telepaths’ Tree really aren’t asking for much but it looks like they’re offering a lot in terms of rewards. This amount is needed for the animation and FX tweaking of the additional elements that were designed at a later stage, when the work on the game was already advanced. They will add the final touch that will make Inner Chains a truly breathtaking experience.

Inner Chains is an FPS horror game set in a surreal, dark, and deadly biomechanical world that resembles nothing you have ever encountered. In the world of Inner Chains, you don’t get to set the rules. You are just a small part of a hostile, unwelcoming universe. If you want to survive, the only thing you can do is to try to discover its secrets.

As one of the inhabitants of this world, your head is filled with the teachings of the Ruling Caste. You have only one goal: to get to a mythical place called the Last Hope and leave this sick, degenerated, dying planet once and for all. You embark on your journey full of fanatical zeal, but soon it becomes clear that nothing is what it seems in this strange world. To discover your role in it, you’ll have to fight for survival, face hostile fauna and flora, overcome your own weaknesses, remain vigilant to your surroundings, and explore the secrets of the game’s world. Your survival depends entirely on your watchfulness, logical judgment, quick reflexes, accuracy, and your ability to use your surroundings to your advantage. 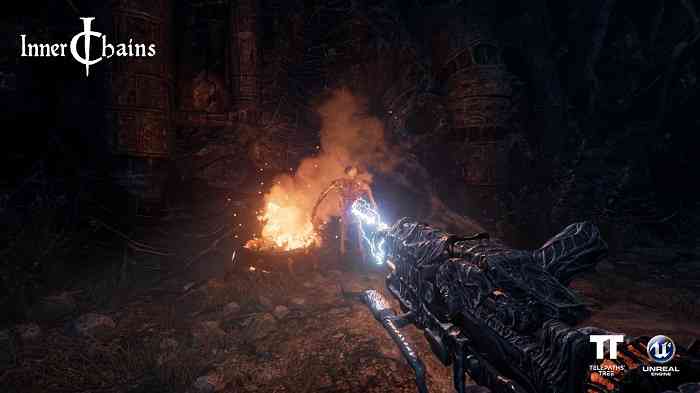 The CEO of Telepaths’ Tree, Tomasz Strzalkowski said “Our plans regarding Inner Chains’ scale were less ambitious when we first started working on the project than they are now. But then the game announcement went live and the amount of positive feedback we got motivated us massively and gave us an additional boost. It was then that we decided to focus entirely on this project, put everything else aside, and create an absolutely unique game that would stand out from other similar titles. Our main goal will allow us to polish some new, additional in-game elements that will make Inner Chains a truly outstanding experience. Of course we also have some aces up our sleeves and some of them were listed as our stretch goals.”

Taking a look at the Kickstarter some of the stretch goals involve adding new opponents, weapon variations, alternative endings and more. The console gamers in the scene would likely hope a console port might be in the stretch goals but as of now it’s not listed.

As with many Kickstarter funded campaigns it’s inherently a risk to invest in but what Telepaths’ Tree has accomplished and presented already shows that this is a pretty safe bet. You can also vote for Inner Chains  on Steam Greenlight as well. I’m sure the devs would love your support!

Uncover The Truth In Conway: Disappearance At Dahlia View
Next
The Legend of Zelda: Twilight Princess Arrives on Wii U
Previous
Hitman Beta Open to All PlayStation Plus Members Now