EA has released an article explaining and emphasizing the importance of the first person perspective in Mirror’s Edge Catalyst. It wasn’t just a must, but a no-brainer. However, even with it being a no-brainer, it wasn’t something exactly easy to achieve and execute. 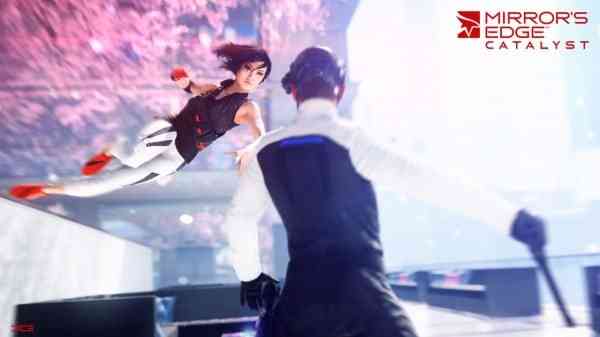 “Playing in first-person is integral to Mirror’s Edge,” says Design Director, Erik Odeldahl. “At its core, Mirror’s Edge Catalyst is about putting you in the shoes of a Runner and letting you live Faith’s story. She progresses from doing her job on the rooftops of Glass, to becoming a person that realizes she has the power to change things for the better for everyone. Seeing the world through Faith’s eyes and using her hands to interact with it is something we believe is absolutely necessary.”

DICE saw the first-person perspective as a no-brainer, but that doesn’t mean it was easy to implement. “You can’t just translate third-person into first and expect it to work,” Odeldahl says. “We’ve spent a lot of time getting the first-person movement right. We’ve also spent a lot of time creating a believable city for you to use this type of gameplay in. A city looks very different from the rooftops than it does from the streets. Where a lot of other games can hide things away from the player behind a wall, we seldom have that opportunity – the player sees so much from Faith’s vantage points, it has to make sense.”

To capture the realism of a first person perspective through the eyes of Faith for the game, the motion capture segment was a key process: “At the shoot, technically it is not that different,” Odeldahl says. “We still have a person in a suit perform the moves while we record them.”

Furthermore, amongst the new set of factors to capture the first person perspective even more drastically is to have the camera “attached to the actor’s head and [making] sure that all moves read well from that angle,” Odeldahl says.

Odeldahl goes on to say that  “in real life, we are so used to using our arms and legs without looking at them, but in a game that just doesn’t work. You need to see what is happening. This is especially true when it comes to combat and doing things like skill rolls when you land after a long jump.”

Using first-person for a frenetic action game is tricky, but ultimately important to the game that Odeldahl and the DICE team are making. “Personally,” he adds, “I hope that people will play our game and be inspired to try it too.”

Mirror’s Edge Catalyst will be release on February 23rd, 2016 for the Xbox One, PlayStation 4, and on Origin for PC.