Tower of Guns Review – Fire at Will

Tower of Guns doesn’t mess around. As soon as you start up the game, you are asked to choose between two guns: a little pea-shooter or another gun that shoots “pizzas,” which are circular-saw blades. I wasn’t sure if the developer, Terrible Posture Games, was just being funny, but I naturally chose the pizza-gun (duh). You also get a choice of one Perk, and I chose the Triple Jump. Then, the Terminator 2-style iron doors opened, and it was time to get killing.

The no-nonsense approach runs through Tower of Guns in other ways. The graphics are crude, the environments simple, and the colors washed-out. I am old enough to remember first-person shooter classics Doom and Quake, and I was immediately reminded of these two games from the get-go. Clearly, the developers wanted Tower of Guns to be a stripped-down, pure shooting experience, without all that annoying story and character development getting in the way. This game has been called Rogue-like, and in many ways it is a Rogue-like game. Much of the game is procedurally-generated, so each time you play, you will encounter different environments. One thing I really thought was cool was that even what little “story” there is changes from one play to the next – the first time I played, I was a creature created by an evil scientist, and my mission was to escape the Tower. The next time I played, I was an agent sent to rescue the President’s daughter from kidnappers at the top of the Tower. Tower of Guns’ flippant attitude to its set-up is almost a satire on the paint-by-numbers narratives in modern video games. 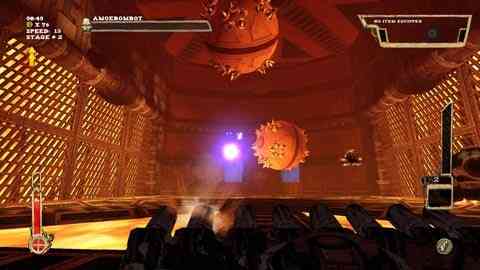 Another Rogue-like aspect of Tower of Guns is its sometimes-punishing difficulty. You move through rooms, killing everything that moves, in your journey up to the top of the tower. Turrets fire shells and bombs at you from all directions, and there is no auto-lock-on so you need to learn to aim pretty quickly. Floating enemies with saw-blades for bodies come directly at you from above. The rooms in Tower of Guns are very large, so you will find yourself up against a lot of enemies at once. If you are looking for a fight, you came to the right place.

The first-person view is limiting at times – I often found myself getting hit from behind after I had thought I cleared a room, by a turret tucked up on a ledge somewhere. Sometimes enemies drop down and float in front of you, blocking your view, and you need to keep moving sideways to stay out of harm’s way. Get hit too many times, and you die, which means you have to start over from the beginning – another rogue-like staple, and one that I personally am not a fan of. There are no words to describe the frustration of dying and losing all progress when you are an hour or more into a game. If you actually find such an experience fun, I have a great game called “Banging Your Head Repeatedly Against a Wall” that you would absolutely love. At least in Tower of Guns, you get to keep the unlocks you earned, so all is not completely lost.

On the plus side, you do get some loot that replenishes health and upgrades your weapons. This comes when you destroy enemies, and they explode in a shower of goodies like stainless-steel piñatas. The blue orbs are weapon upgrades, and my pizza-shooter soon became a pretty lethal turret-destroyer by level four or so. There are also red orbs that heal you, and you do get these pretty often. Once you get your bearings and learn to maximize your upgrades, you have a lot more success. You might even face a Boss – an extra-massive, missile-shooting behemoth that will really test your skill. In this game, unlike some others, getting hit is really bad and you will want to avoid it at all costs. For one thing, it deals a lot of damage. Secondly, it also takes away your hard-earned gun-upgrades. So needless to say, you quickly learn that dodging while shooting is essential in Tower of Guns. This is as true of Boss Battles as any other part of the game; it’s just more so with Bosses. Avoid getting hit first, and get in return-shots where you can – this was, in my experience, the key to success in this game.

Once you begin to feel a bit of confidence (and unlock better guns and perks), Tower of Guns gets pretty damn fun for a while. Running, gunning and dodging your way through rooms, you feel at times like you are on an amusement-park ride. I was like a 10-year-old again, racing around to find and collect everything. But this fun only last for so long, unfortunately. One reason for this is the lack of variation in the game. As fun as the rooms are, they get repetitive after a while. Maybe it is a side-effect of the procedural generation, but I found the sameness of the environments and enemies grew to be tiresome. There wasn’t much incentive to keep pushing forward through the game – I knew what awaited me behind the next door, and that was exactly what I had just faced, but much harder. Hardly an encouragement to keep playing. Some different loot or secret rooms might have kept me interested longer. 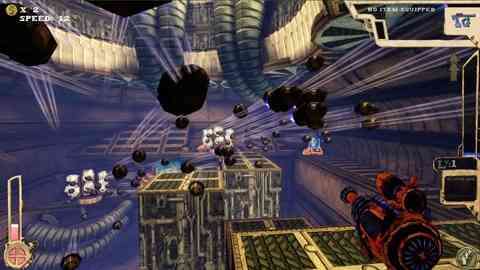 The low-res, somber visuals can also grate on you after a while. I get what the developer is trying to do – evoke the retro, polygon look of its old-school inspirations. It just doesn’t make for a fun place to be, especially when you have been playing for some time. I really became desperate for some color and flair to give me something pleasant to look at besides the same brown turrets and grey rooms. Bosses could have been crazy, outlandish-looking things, glowing with power and shooting fire and lasers. Instead, they were just the same brown or grey enemies but much bigger or faster or more deadly. Maybe at times, there are even two of them to fight at once. But overall, the joy and mystery of discovery was just not really strong enough in Tower of Guns, and that made me look at my watch after not too long.

Tower of Guns is a pretty decent, fun game to play casually, when you are in the mood to just blow stuff up. And it never takes itself too seriously; it has a cheeky, almost satirical scorn for the pretentiousness of today’s bloated AAA blockbusters, and that is certainly not a bad thing. Just don’t look for this game to be anything more than the short, intense bullet-hell experience than it is. Play it for a while, die many times, put down your controller, scream into a pillow, and go watch cat videos. And then, when you have calmed down, come back to play it again. If you stick with it, Tower of Guns will give you exactly what it promises – a few hours of insane, mostly fun, run-and-gun action.