The Way of Kings: Escape the Shattered Plains Review – A Beautiful Tech Demo

The Way of Kings: Escape the Shattered Plains Review

Always be sure to read a game’s description. Most of the time these are brief overviews so players have an idea of what they can expect in the way of features and that sort of thing. Sometimes, doubly so in VR they can be quite literal. Such is the case with The Way of Kings: Escape the Shattered Plains. Touted as a short interactive narrative adaptation of Brandon Sanderson’s best selling fantasy novel The Way of Kings, this “interactive experience” is indeed a short one.

Just how short are we talking? I was done in 20 minutes and that was after standing around watching the entire credits roll past while wondering to myself if there was any more. This is probably a rare time when telling you everything won’t be going into too many details. Starting from the top, the title screen. While the visuals look nice, as does the rest of the experience, it does have the feel of a sign hanging outside the line of an amusement park ride. In this case, however, it may actually be appropriate.

“For anyone without prior attachment to the book the adaptation is based on I just don’t see the appeal.”

The first scene sees you chained up on some sort of bridge/pier as a dust storm hurls rocks in your general direction. While I could move my hands around, that was it, so you just sit there and watch the storm. One boulder smashes into a pillar you are chained to. Oh, maybe I’ll get out of here! Um, no, the next thing was a large pile of debris headed straight towards my face; scene ends.

You wake to find yourself in a chasm talking to Syl, a fairy looking creature and discover your powers. Is it stormlight, is it surgebinding? I’m not really sure as I’m not familiar with the book, but it pretty much seems to work like the force in a rather popular sci-fi series. You move some boulders, get a walking tour of the chasm and a little bit of backstory. It doesn’t really seem like enough info to know what the heck was going on though, unless you are already familiar with the tale it’s telling. Eventually, you come upon some sparkly blue things, which I believe are called spren, who float you up out of the chasm. 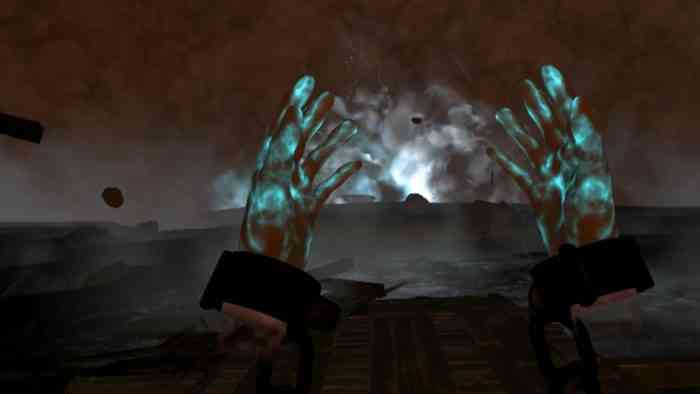 Unfortunately, at the top there are some pretty gruff looking guys waiting to give you a beat down. While punching was an option some of them had maces so I spent time teleporting from side to side, force pushing, and throwing them around. There’s a cooldown mechanic on the use of this, so you are obliged to at least pretend to want to dodge around for a bit. Eventually a giant rock lobster, technically a chasmfiend I believe, pops up for a brawl as well. You toss some rocks around at it, and some time and after picking up a magical green glowing rock, you can now hurl an even bigger boulder at the thing and kill it. Hurrah! But that’s also the end.

I’ve played a good number of VR titles so far that are intended to be this sort of interactive short narrative or experience, some like this, with zero previous experience of the source material either. Despite this, The Way of Kings: Escape the Shattered Plains is the first one that I truly felt like I absolutely needed that connection to enjoy it. The mechanics are about as standard as can be for a virtual reality title. You punch to punch, and point your hand and pull the trigger to use the force thing, teleport movement. The visuals are very good and it runs without any issues, but other than that, for anyone without prior attachment to the book I just don’t see the appeal. If you are a fan of The Way of Kings books, this might be something to look forward to, but if not I’d give it a pass. Plain and simple, it’s not that interesting of a VR title on its own without that connection.

The Dark Pictures Anthology: The Devil in Me Review – The Murder Castle
Next Mulaka Review – A Boom Shakalaka of a Platformer
Previous Sword Art Online: Fatal Bullet Review – Long Shot Hits the Mark