Ryse: Son of Rome (Xbox One) Review – Here’s What a Next-Gen Game Can Look Like on the Xbox One!

At E3 2013 Microsoft featured Ryse: Son of Rome as a game that would show naysayers what the Xbox One was capable of; however, the general consensus was that the game had quite a ways to go before being a must have title.  Fast forward to present day, the Xbox One and Ryse are finally on store shelves and the Xbox faithful finally have a chance to see what, if any, improvements have been made since the shaky E3 showing.  Having played the game in its entirety, and having played the multiplayer with a couple of friends, I have to say that although this game can be amazing at times, it’s the gameplay as a whole that may have some shaking their heads.

In a nutshell Ryse’s narrative is one of death, redemption, betrayal, and honour during Roman times.  Yep, it’s quite a mix.  Our hero, Marius, faces many different events that shape who he is and what he is meant to do during the game.  Personally, I thought the story was well thought out and the pacing was good.  It dawned on me as I was playing that I really wanted to keep going just to see what would happen next.  The game really does a respectable job delivering the storyline and making it something you pay attention too.

The crux of the gameplay has you controlling Marius as the story unfolds.  When you first start off you’ll learn the basics of combat, from sword attacks, shield blocks, shield pushes, and evading.  Once you start to master these you then learn, and of course master, executions as well as your Focus ability (the “Matrix” effect where everything slows down).  The executions have been a major complaint of the game since it’s unveiling at E3, as they resulted in Ryse being labelled as a Quick Time Event only game, which it isn’t. 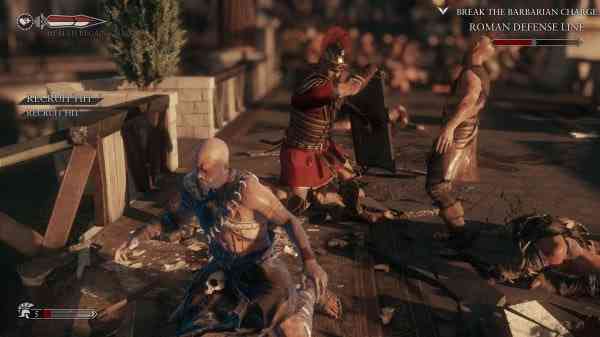 Overall combat is easy to learn, and once you master it you’ll find that it can become tedious and repetitive as the game continues on.  I personally enjoyed most of the combat, and it could become intense at various points during the game, but I can definitely see how many people will become bored with the repetitiveness.  That being said, you’ll have to learn the intricacies of perfectly timed blocks and counter attacks to really master the game.  Sure, you can get through with some basic button mashing, but to get all of what the game can offer in the area of combat, learning more makes it a better experience.

In regards to the executions, they are indeed QTE based. Timing is everything with them and the quicker you respond, the better the rewards. You can choose to earn bonuses for your timely, and correct, button presses, including health, focus, extra XP or extra damage.  The quicker and more accurately you respond to the button cues (e.g. Legendary Hit, Centurion Hit, Soldier Hit, Recruit Hit), the better the reward value.  One of the things that was somewhat of a disappointment in this area for me, and some of our community members, is that you don’t have to hit the right buttons to have the QTE execution play out.  Sure, the reward will be substantially smaller, but there is no ‘fail’ in this area, and this is where many will see Ryse as a button masher.  I guess in many ways it’s what you want to make out of it, and if you just want to hit any button for the sake of hitting something then go ahead, you just won’t get that feeling of reward when you do it.

As you make your way through waves and waves of enemies there are certain sections that change things up from the standard combat.  You’ll find yourself manning a crossbow turret (with fire arrows nonetheless) taking down hordes of soldiers and even war elephants.  You’ll also find yourself taking down enemy archers with spears you specifically throw or while controlling a platoon of men marching down on the enemy.  As for the latter, it’s kind of neat to order your platoon of soldiers to “shield up” as you block an incoming wave of enemy arrows.  The changes in gameplay are few and while they can be a nice change of pace they are more of a gameplay experience and not an earth shattering gameplay mechanic. 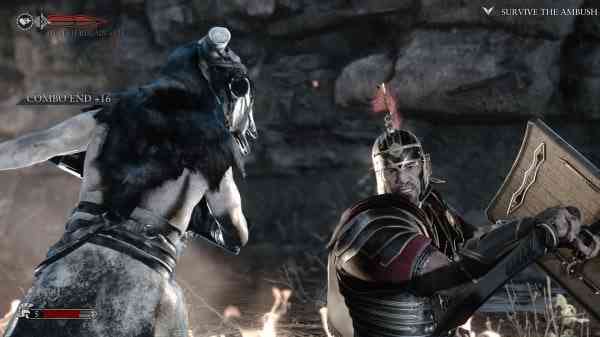 There are pivotal points where you fight what is the equivalent of a boss battle.  You’ll find about four of these battles throughout your adventure.  These bosses are tougher than the other foes you face as their moves are more powerful and many of their attacks are unblockable.  It is a matter of learning when to evade their attacks, when to block the attacks that you can block, and when to launch a counter-attack.  Some of these battles can seem a little unfair, especially at the higher skill levels.  One such battle was the fight against one of the Emperor’s Sons in the coliseum.  I won’t ruin it for you, but just as you think you’ve got it beat, there is more for you to do.

Ryse also offers up some SmartGlass and Kinect support.  Log into the Xbox One SmartGlass app and you can then launch the Ryse Companion app (only supports tablets, not phones).  Here you’ll find a small hub that includes the collectibles you’ve discovered, the Ryse comic, the game’s manual, and real-time stats on how much you’ve completed on the level you are on.  In regards to Kinect support, you can use your voice to order certain troop actions, such as firing volley of arrows or launching a catapult.   Both of these options are neat and something that further adds to the nuances of the game.

One of the more disappointing aspects of Ryse is the game’s length.  You’ll find that gameplay lasts for about 5-6 hours, give or take an hour or two for the level of difficulty you play on.  The harder difficulties can be somewhat challenging and you’ll die more often then you hope, so you’ll have to be on your “A” game to stay alive.  There are collectibles within the game to find (e.g. Vistas, Scrolls, etc.) and you can search high and low for each should you desire.  I did not find all of them when I went through the game the first time, and I do plan to play through again in an effort to find them all.

Should you desire some multiplayer gameplay, Ryse supports 2-player online co-op.  Here you and a friend will enter the coliseum and do battle through waves of attacking barbarians.  It is best explained as a horde-like mode where teamwork is needed.  As you battle your enemies you’ll be tasked to complete different objectives such as capturing and defending a point, killing a leader, or destroying a catapult or enemy base.  Things can get hectic and I found I enjoyed playing these cooperative levels with a friend.   You can customize your online gladiator buy purchasing booster packs or one of two specific costumes.  These are bought with in-game gold you earn in the online mode.  You can also purchase gold with real money via microtransactions.  All in all the online cooperative is can be fun but it is not the deepest of modes but it is something that you can play now and then with a friend. 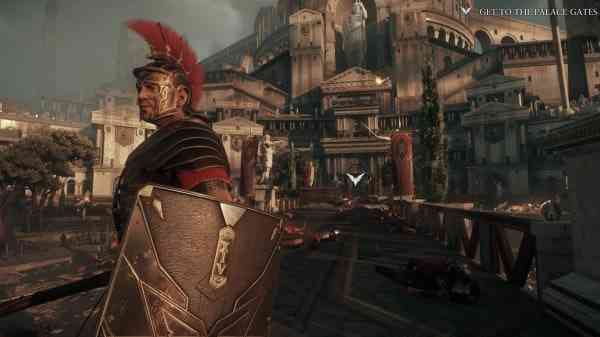 Visually Ryse is a stunner, plain and simple.  If you are looking for a game to show off what the power of the Xbox One can do this is it.  The level of detail is amazing, the lighting is realistic, and each level that the game takes place in looks gorgeous.  From the streets of a glorious Rome, to the beaches of the enemy, to lush forests with running water, and back to the slums of a decimated Rome after being reduced by war, it’s all well rendered and very realistic.  Ryse’s story is told using the in-game engine and here you see even more detail of each character.  The story plays out with the in-game action seamlessly and keeps the flow of everything.  There is rarely, if any, technical hiccups as you play.  The framerate is solid even when there is a ton of action and enemies on screen, textures are detailed, draw in is distant, and everything just moves along smoothly.  It is a testament to Crytek and their CryEngine technology.

Matching the visuals is the audio.  From the solid voice acting to the amazing sound effects, you’ll find little to complain about here.  The voice actors lines are communicated with some authority and you’ll find their dialog pretty enjoyable.  Seeing the fully rendered characters speak their lines all makes for a more immersive story telling experience.  As for the sound effects, they are great too, and if you are playing with a full surround sound set-up expect the game to take full advantage.  From soldiers and barbarians battling all around you to the sounds of each environment (e.g. waterfalls, running water, birds chirping, insects buzzing, etc) it is an aural treat.  And what would an epic Roman story be without some epic music….Ryse has this too.

Ryse: Son of Rome is a game that was designed to show what the Xbox One can do, and boy does it show off the power of Microsoft’s new console.  The visual and sound presentation is amazing while the story is engaging and something worth watching.  Unfortunately, where the game has some issues is in its fundamental gameplay, as many will find the combat becomes repetitive, the QTE executions cannot fail, and the overall gameplay length is short.  On a more positive side there is a multiplayer mode that friends can have some fun with in short bursts.  At the end of the day, even with its faults, Ryse is a game that one should experience as it does offer a glimpse of what next-gen can be on the Xbox One.

Next Ys: Memories of Celceta (PS Vita) Review – An Old School RPG for Those on the Run
Previous Battlefield 4 (PS4) Review – DICE & EA Score a Next Gen Headshot