One Piece: Romance Dawn (3DS) Review – A Horrible Game with so Much Missed Potential

One Piece, Eiichiro Oda’s wildly popular manga and anime series, has made many appearances in video games throughout the years with over 30 titles across multiple platforms. That being said, it is making its first appearance on the Nintendo 3DS in One Piece: Romance Dawn.  Developer Three Rings Inc. has a created a turn-based RPG that had the potential to be fantastic given the material they had to work with, but instead it falls quite flat, leaving players with an very unenjoyable experience.

Romance Dawn begins with an introduction into the wild adventures of the protagonist, Monkey D. Luffy, and his aspirations to become the King of The Pirates. After eating a piece of Devil Fruit Luffy’s body becomes rubbery and elastic and he, along with a group of pirates named the Straw Hat crew, sail the seas searching for an item, known as the One Piece, that will help him realize his pirate dream. The game focuses on telling the story rather than on gameplay mechanics, and unfortunately the plot is told in a dreadfully boring manner. Perhaps the humour and writing that fans of the manga enjoy were lost in translation, but the dialogue is just plain awful and very poorly presented. With a mix of animated scenes voiced over in Japanese, and text bubbles that appear on screen along with a portrait that shakes when a particular character is speaking, this presentation didn’t do the narrative justice. 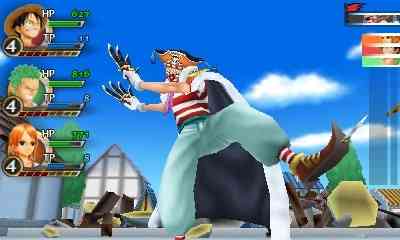 The cutscenes are downright unbearable to sit through, and they are extremely long, much too long for a game that can be played on the go. They can last nearly 15 minutes at times. I should note that they can be skipped with a press of the Start button, and long time fans may enjoy and recognize the characters and key plot twists, but for those who are unfamiliar with the series, suffering through these cutscenes is an absolute must if you want to know what the heck is going on. Admittedly, after sitting through the first two or three scenes I couldn’t take it anymore, and regretfully I found myself skipping through them.

Traveling from island to island with his crew, Luffy finds himself exploring locations and dungeons that many fans will recognize from the manga. Luffy also encounters bosses that fans of the series have come to know and love. You start out with Luffy as the only character you control, but eventually you will add other members to your party. After a terrible 10 minute cutscene you are finally rewarded with a bit of action, and you’re thrust into gameplay without any sort of tutorial; however, the turn-based combat was not very difficult to figure out because to be perfectly honest, it was extremely boring and repetitive, and oddly enough it makes no use of the 3DS touch screen at all, not for travel, combat, or inventory.

Romance Dawn uses the basic RPG turn-based controls such as attack, run, use item, etc. I found myself repeatedly using the A button to use a party members standard move, eventually gaining access to a special power (like Luffy’s Gum Gum pistol) when Action Points allowed it. In each battle characters can move freely during their turn, moving within range of an enemy to better increase their chances of damage; however, there is a cost for straying too far from the area a character started in when the battle began. Stepping outside of the yellow and red rings displayed on screen for that character results in a penalty for that character when their next turn comes up. 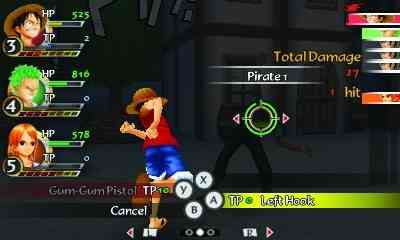 The are numerous items throughout each level to help your characters regain health, like rice balls, and there are special clothing items that upgrade a character’s ability, but you will very rarely use them as the enemies you encounter present very little challenge. And much like any RPG, characters can level up with experience points, which gives you the ability to upgrade special attacks.

While this is a 3DS game, surprisingly, playing One Piece: Romance Dawn in 3D is not an option at all. Surprisingly, Three Rings Inc. failed to give players the opportunity to experience Luffy’s adventures in stereoscopic 3D. While the visuals are quite colourful, the character models look extremely dated, much like a game from a previous generation, and the environments are terribly boring, as they seem to be the same corridor after corridor throughout the level. I recall excitedly reaching a set of stairs, climbing up hoping to be rewarded with a new area to explore, only to be met with the exact same boring hallway. The music is really nothing to speak of either, although seemingly fitting for the action on screen. I can’t really speak of the voice acting as it was entirely in Japanese, but considering this is a JRPG manga/anime game, dubbing over these voices in English would take away from the experience.

Sailing the seas, encountering strange and weird enemies and boss battles, and seeing Luffy’s strange rubbery elastic body, One Piece: Romance Dawn had the potential to be a fun, action filled turn-based RPG, but instead Three Rings Inc. has developed something that is a complete wreck.  It’s a shame that such a popular long running manga series is presented in such a manner. Perhaps the truly hardcore fans may have some interest in adding this to their collection, but with dreadfully long and uninteresting cutscenes, repetitive combat and monotonous level design, as a newcomer to the series I was left with a bitter taste in my mouth, and I simply cannot recommend purchasing this game.