From the creators of the Dynasty Warriors series arrives Toukiden, a somewhat mash-up of Dynasty Warriors’s historically themed setting with the combat of Monster Hunter’s monster hunting (did that make sense? LOL) thrown into the mix. I remember seeing Toukiden available for pre-order and thinking “What in the world is Toukiden?!” Thankfully, I was given review duties for the title and I can’t believe I was in the position of complete unknowingness with this title. Oddly enough I’ve never been a fan, nor particularly interested in, the Dynasty Warriors or Monster Hunter series, but Toukiden just might change that. Maybe the mash-up approach Toukiden takes will draw me into these types of gameplay rather than just the Dynasty Warriors or Monster Hunter aspect on their own. With Toukiden landing in my small but growing Vita game collection, I couldn’t wait to kick some demon butt.

You start off by creating your character to start of your adventure with. You get to pick their gender, hairstyle, face type, weapon, and even voice. After your character is created, you learn about how the Oni (demons) arrived on the human world from the Otherworld through an event called the Awakening. The Awakening includes the events where the border between the human world and Otherworld is diminishing, causing the Oni to pour in while making a time space warp. As the Oni started to arrive Slayers (warriors who fight Oni) from all over gathered together to fight against them in a war that lasted seven days and seven nights. After the events of the Awakening humanity has struggled to survive but Slayers have continued to fight against the invading Oni. Now, eight years after the Awakening it’s up to you, the new recruit, to join the fight against the Oni and save humanity from imminent peril.

In spite of a pretty basic introduction, the whole historical theme and the Oni infested time-warped world is a nice change from zombies or something futuristic or sci-fi like. The story takes place in the past and this is noticeable from the traditional clothing and environments with little quirky twists here and there. In all honesty, most of my enjoyment came from learning about the history and the secrets of each character you meet along the way. The story really just sets the stage up for the characters to show the impact the war is having on them and it makes the invasion of the Oni have more of an impact on players. Without the characters the Oni invasion would just be another typical war. Nevertheless, the whole package of characters, dilemmas, as well as the “great war” was enough to encourage me to further continue my adventure as a new recruit. 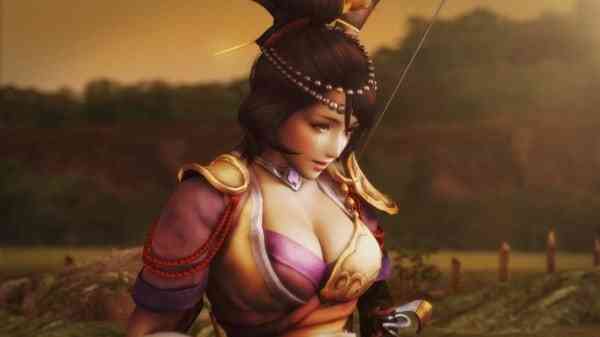 Throughout the game, you meet other Slayers and you can join other players online or locally to venture out and face the Oni as a team. Certain missions require a team while others are strictly on a solo affair. When defeating Oni material can be obtained to create weapons and armor or to complete quests with. Quests can reward you with things such as Haku (the in-game currency), other material, or an increase in the amount of items you can carry/store. I found that quests are nice and easy to complete since you accept and complete them all in one place as there no need to run around to find the person.

Moreover, certain Oni have devoured the souls of past heroes or Slayers and have entrapped them within their body. As a result, when an Oni who has devoured the soul of a past hero or slayer is killed and purified, you obtain something called a “mitama”. A mitama is the soul of the rescued hero or slayer who will aid you by awarding you with a specific fighting style that includes certain boosts and abilities equipped to weapons. With over 200 mitama to collect, each focusing on a particular fighting style, the combination of weapons and mitama are endless. To top it off, the beautiful art and designs of each mitama makes them even more fulfilling to collect.

On the subject of weapons, what I personally appreciate about Toukiden is the fact that you’re not stuck to one class or weapon for the entire game. You can freely choose one of the six types of weapons that you feel like using for each mission without any drawbacks. Whether you like the fast paced dual knives or the ranged and precise bow and arrow, there’s definitely something for everyone. Aside from weapons, as a Slayer, you have two main abilities that aid you in the fight against the Oni. First is the ability to perform the “Ritual of Purification”. Whether you’ve severed a certain part of an Oni or killed an Oni entirely, performing the Ritual of Purification stops the Oni from healing that specific part or entirely regenerating while you also obtain certain materials from it. Additionally, the Ritual of Purification regenerates the your stamina. The second thing that occurs is the “Eye of Truth” ability. By using the Eye of Truth, players are able to see an Oni’s health bar, severable body parts, and hidden items in the battlefields. However, stamina is needed to use it and it slowly drains it while being used. 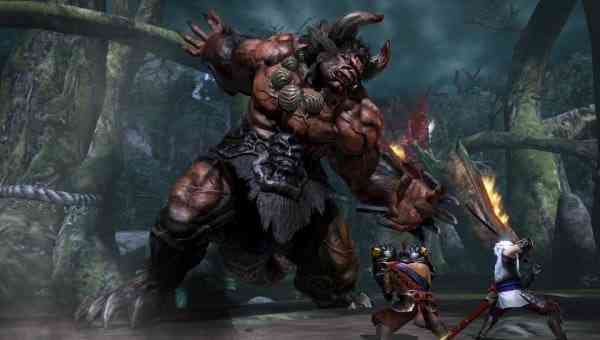 While abilities and accessibility to weaponry is great, one thing that surprised me was that even though there is a leveling system for the mitama, there is an absence of a character leveling system in Toukiden as a whole. With no leveling system there is no stat assignment to alter your character’s attack or defense as you may see fit. The only way to alter your characters attack or defense is through weaponry and armory. While some people may like the simplicity, others will die from boredom with the limited and confined growth. Although I didn’t mind this too much I can understand why others may not agree with this gameplay element.

The battlefields you explore are called “Ages” which are from various time periods that are a result from the events of the Awakening since time and space has warped. Furthermore, Toukiden is not an open world game as barriers with short load times split the areas within the battlefields as you open them. To access a certain Ages or a battlefield you must embark on a mission; you cannot freely exit in and out from the village without a designated mission that brings you to that specific battlefield. This is probably the biggest downside of the game. It really limits how much you can explore, and makes it feel repetitive, as you have to redo a mission just to explore the battlefields.

The AI in the game is actually fairly good. It doesn’t feel bland or make you wonder who would ever create such a dumb AI; it’s actually quite unpredictable at times which makes it better than others I have faced in the past. Not to say it’s amazing, but it does get challenging at times and really puts you on the edge. Most of the small repetitive Oni are a complete breeze to defeat, while the bosses occasionally require a little planning and modification to your approach.

Whether you’re adventuring it solo, online with people you’ve never met, or locally with a trusted friend, the goal stays the same: kick Oni butt. While I’ve mostly played in single player mode, I did try the online multiplayer feature and to my surprise easily found people to play with.  An annoying feature that will gather mixed impressions is the fact that the available missions in a game room is based off the player who is on the earliest chapter. Since there isn’t a leveling system in Toukiden, it doesn’t affect EXP gained since that doesn’t even exist, but for those who’ve done the missions before you may get a bit annoyed. Online games ran smoothly and it sure was fun meeting new people, but the unfortunate part is the inability to freely type as you choose from a premade list of phrases. At least players can make gestures I guess! 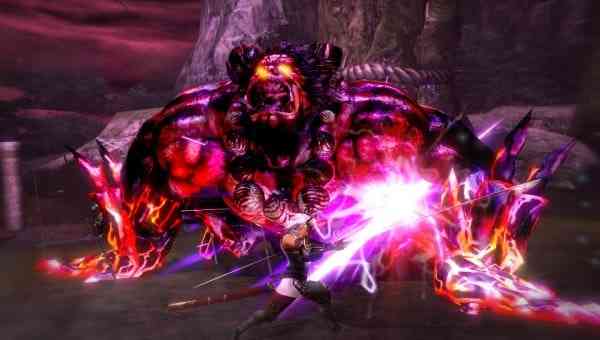 In terms of the visuals, Toukiden uses a mix of 3D animated cutscenes, regular 3D animation for gameplay, and illustrations to show the emotions of characters speaking. Whether it’s the 3D cutscenes or gameplay animations, Toukiden does a surprisingly great job. It’s clear, sharp, vivid, and is definitely enjoyable to watch. Moreover, the design and detail for the environment, characters, enemies, and equipment are spectacular. The artist for the game is someone I’m familiar with which was a very big shock to me since this is sort of out of her genre. Nonetheless, I was more than pleased with her work here!

Despite the game not being fully voiced (although I wish it was), the voice acting was superbly done. I’m extremely happy that the game isn’t dubbed in English as I feel it would lose its authentic Japanese charm given the historical Japan theme. It’s great and feels perfectly made for each character. Regardless, it’s really a matter of preference as I can understand some people would want an English dub for it. With that said, this game does involve quite a bit of reading. In terms of the soundtrack, it doesn’t make too much of an impact as it just gradually shifts from the village music, battling music, then occasional happy or sad music. The soundtrack is just something to avoid the completely awkward silence. Finally, sound effects aren’t too expansive; it’s pretty much the same regardless of what Oni you face. It doesn’t get annoying since it’s just to add the little oomph and emphasis of intensity and feeling of power when striking your sword.

From the depths of the unknown, Toukiden: Age of Demons has proven to be a fun and visually pleasing game to land on the Vita.  While lacking an open world environment and a leveling system to go beyond the limits, Toukiden still proves to be a great game to keep players busy and entertained. Whether familiar or unfamiliar with the Dynasty Warriors or Monster Hunter type games, PS Vita owners should give Toukiden a shot. 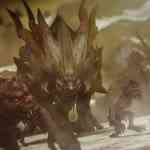 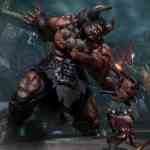 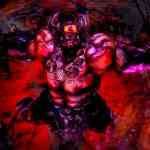 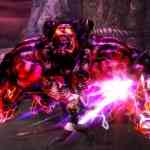 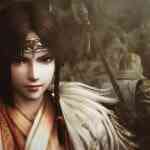 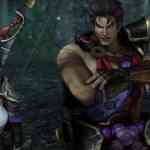 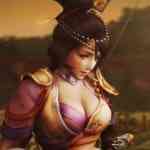 Next The LEGO Movie Videogame (Xbox One) Review – Finally, a Movie Tie-In that Doesn’t Totally Suck
Previous One Piece: Romance Dawn (3DS) Review – A Horrible Game with so Much Missed Potential