To say that the 2010 Joy Ride game for the Kinect “sold the sizzle but not the steak” would be an understatement.  Joy Ride showed nothing but promise before it was released and the developers surely had to be hoping the game would showcase the Kinect’s capabilities.  Unfortunately, the game did not deliver and mainly suffered due to its poor motion controls.  Along comes “Joy Ride Turbo” for the Xbox Live Arcade (XBLA), but this time developer BigPark have ditched the Kinect motion controls and made it into an affordable XBLA game at 800 Microsoft Points.  After some extended playtime I have to say I am fairly impressed, but much like a good piece of Hubba Bubba bubble gum, Joy Ride Turbo will only satisfy for so long.

Much like other kart racers we have seen on pretty much all major consoles and handhelds to date, Joy Ride Turbo follows in their footsteps by providing a colourful racing atmosphere, fast paced races, crazy tracks and charming vehicles.  On the surface, Joy Ride Turbo has all the ingredients to be a fantastic little arcade racer, and for the price you really can’t go wrong, but the game has a few aggravating issues that hold this back from being considered a must own kart racer for the Xbox 360. Before I get into the game’s issues, let me tell you a bit about the games modes.  Joy Ride Turbo has three types of races: Battle Races, Pro Races and Time Trails.  Battle Races involve crazy weaponry and power-ups.  The races are quick and there is plenty of chaos on the track.  The power ups are nicely spaced apart and each track features more than one short-cut.  These short-cuts also have crates that unlock new tracks and car parts.  The car parts unlock vehicles in the game.  Pro Races is a simple race without any of the power ups.  It’s all about racing and finding the quickest way to the finish line.  Finally, Time Trails are exactly what the title says as you race against the clock.

Joy Ride Turbo includes 10-tracks and 2-stunt parks.  The tracks themselves are very cartoonish, and much to my surprise some of them present quite the challenge featuring tight turns and areas where you need to quickly become acquainted with your drift button.  The 2-stunt parks in the game are equally crazy and feature monstrous ramps, massive half pipes, and many areas where you can perform larger than life tricks with your ride.  Much like the previous Joy Ride game your Avatar steps into the driver’s seat and I have to say I loved this feature as I certainly got a kick out my Avatar dressed in a Modern Warfare 3 suit leaping out his car and fist pumping after a race.

As I mentioned, Joy Ride Turbo is a controller based game and this comes as a welcome relief, as frankly Kinect games have disappointed me more often than not since its arrival.  In any event, control wise the game plays out like pretty much every over arcade racer on the Xbox 360.  Left trigger is your brake and reverse function; right trigger is your gas; the ‘a’ button triggers your power ups and the ‘x’ button is for drifting.  Once you have a command of those 4-basic controls you are good to go.  The controls are not the best we have seen in a racer but they adequately do the job.  The tracks are very forgiving and it is easy to recover when you make an error.  When racing you can perform massive ‘Dukes of Hazard’ like jumps performing a wide variety of tricks and stunts such as twists and spins.  These tricks earn you extra points and also add fuel to your nitro bar.  Yes, the game features a nitro boost button which is a staple for these types of games. Joy Ride Turbo can be played with either 4-players locally or up to 8-players online over Xbox Live.  I spent the majority of my time with the game playing locally on split screen.  Overall it was a lot of fun as the races were chaotic and close, and I must say I had a great time exploring the tracks with my brother-in-law as we hunted down all the crates which contained unlockable items.  Finding these unlockable items is a critical aspect of the game, as we quickly found out.  In order play with the other available vehicles you need to find these crates and some can be a challenge to seek out.  It would have been nice to have a few more cars unlocked from the get-go; however, by making some these crates a challenge to get to does give Joy Ride Turbo some replay value.

After you are sick of racing you can spend some time in the stunt park, but I am warning you, you really need to set aside a lot of time if you want to find all the trophies and crates in the stunt park and actually retain everything you find.  The stunt park is a wide open free for all where you drive around performing all sorts of jumps, tricks and crazy manoeuvres.  You can see trophies everywhere but they are hard to get, especially all 40 of them.  The stunt park is not a timed affair, so if you do not retrieve everything, you lose everything you collected if you quit before acquiring it all.  After collecting about 12 trophies, which took a half an hour, I quickly lost interest and when I exited everything was lost. As far as the visuals are concerned, Joy Ride Turbo is good looking game for the buck.  It has a cartoonish and arcade look and the in-game graphics engine is solid.  It is a bright and colourful game where the carnival-like tracks look just as good as the desert mountain tracks.  The draw distance is solid and there is a certain charm with the game’s appealing visuals.  I did not notice any technical issues either, as there was no noticeable slow-down or clipping issues.  All in all, I was quite pleased with the overall look of the game.

In terms of the games audio, Joy Ride Turbo is mostly forgettable.  The tunes that play in the background are barely noticeable and could have been amped-up a bit more.  Something with a little more energy would have been nice.  The games sound effects are decent but nothing we have not heard before from other games of a similar ilk.

Overall, Joy Ride Turbo for the XBLA is a good little arcade racer especially when you consider the 10 dollar price tag.  Granted if you had paid 50 bucks for the game you would be upset as the it is light on features, and those who love their racing games on the more serious side will likely turn their nose away from this game.  That being said, this mindless racer was enjoyable, fast-paced, and offered up exactly what I was looking for, and that is some cheap racing fun. 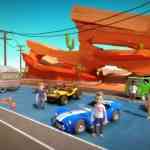 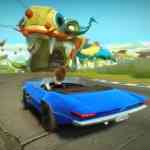 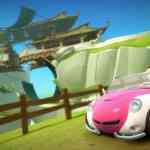 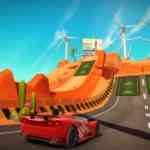 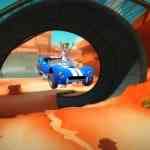 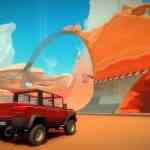 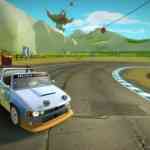 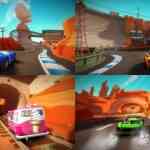 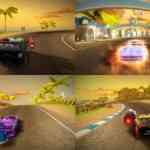