Deceived at first by the innocent art style, I expected Harold to be a bit of a walk in the park. Little did I know that Harold is not only a clever and humorous platformer, but a challenging one as well. Harold sets itself apart from most games by giving you control over the environment more than the character traversing it, and I was pleasantly surprised to find myself puzzled and unable to keep up with something which I mistook for easy.

You play as Gabe, a guardian angel in training whose final test is to get a racer through a deadly obstacle course. Normally the top in your class, you’ve been assigned to Harold, a bit of a dweeb who doesn’t normally stand any kind of chance against his competitors. Luckily Gabe has a few tricks up his sleeve, and can interact with objects in the environment. Lower bridges, move pulleys, slide platforms, if it can be moved then Gabe can move it. He can also give Harold a little bit of incentive by zapping him with Puff Power to get him running.

While some of the mechanics found in Harold aren’t totally new, the idea of racing and competing with others is not only a lot of fun but it forces you to think faster. Sure, you can finish that race. That’s easy. Can you come in first, second or even third? When there are multiple paths presenting you with options and often multiple objects to interact with on screen, everything turns more into a reaction than a thought. Aside from the first couple races, I had to retry every single one often many times before I could come in third, let alone second or first. The main takeaway here though is that I was never discouraged. The races are designed well and you always feel like you’re just a tad too slow. Instead of feeling like you’re losing because the game is hard, it’s because you need to get better. Just a little bit. A couple more practice runs and you’ll nail that section that utterly stumped you the first time Harold ran into certain death. 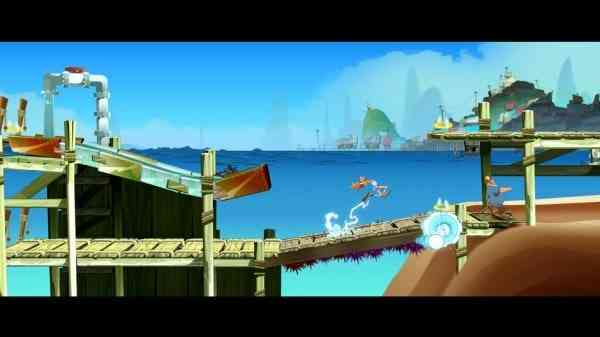 Moon Spider Studio must have done a fair amount of playtesting as well because the difficulty curve is a little steep at first but turns into a great slope that allows you to feel confident but challenged. There are new obstacles every step of the way. To help with this, you are forced to practice first. Each race is broken down into sections in which you attempt to guide Harold across the best path possible, generally leading to faster routes or shortcuts. While I was a little annoyed that I couldn’t just jump in, it really was for my benefit in the end. I would have likely failed miserably if I had just started every race and hoped for the best.

Everything is well-decorated and drawn, too. All of the environments look gorgeous and the game follows an art style inspired by Disney and cartoons. This is even more apparent when you witness Harold in any of the cutscenes, with a good helping of slapstick humour to tie it all together. The animators and designers have done a great job of keeping everything clean but still funny so it really can be enjoyed by a wide audience. This is easily a game you can play in your living room and never worry about who might walk in.

Harold might not have a huge amount of content, but it’s enough to keep you playing for a few hours if you just want to finish the game. Completionists can easily get their dollar value when trying to not only collect all the stars in every practice area, but come first in every race as well. There’s also a challenge mode which basically teaches you the perfect but dangerous line in every level with a string of smaller stars to collect which highlights this. Something a lot of people may not notice about the content is that it also looks nicely polished, so everything you’re playing has a bunch of tiny detail. Particle effects, smooth animation, and great lighting go a long way and deserve some recognition. 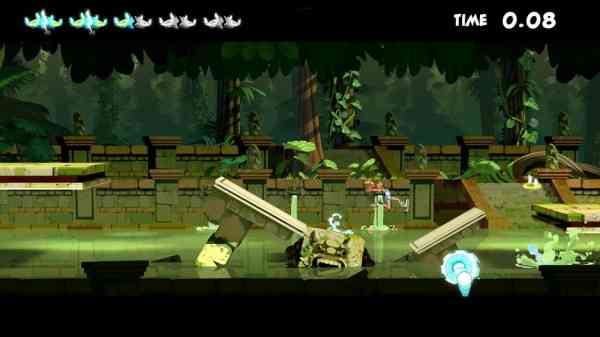 Simply because this is a PC review, one thing that might irk players a little bit is a lack of keyboard controls. Honestly I just don’t really see how it could work and still feel the way it does, but not everyone has a gamepad they can just plug in when they need one. I firmly stand behind the lack of support here, but I hope nobody buys it only to realize the requirements too late. Thankfully it’s listed right in the requirements on Steam. As for the controls themselves, it’s kind of like patting your head and rubbing your stomach at the same time. Or playing drums with all four limbs, to obviously a much lesser extent. There’s a weird disconnect from Harold that feels odd at first but definitely fits the game. Be ready to get confused when the same movement that pushes a crate down pushes another up! I can’t even fathom how many times a simple motion like this had me stuck, just because of weird patterns or a strange order of operations would throw me off.

The key thing to take away with Harold is that this is a fun, pretty and polished game. Rubbing your stomach and patting your head takes some practice, and so does Harold. Most platformer fans will get a kick out Harold, and anybody with a spare controller laying about that wants to try something new should check it out. Granted it’s a little pricey at $20, but worth every penny if you appreciate the art style or merely enjoy continuous runners. You’ll at the very least have a challenge on your hands. Can you come in first in every race? I sure couldn’t.