Work sucks, you guys. Normally, one turns to video games to escape this grim truism. Yuppie Psycho is the rare case that reminds you work could suck quite a bit more. No one at any job I’ve ever had spat acid at my face or chewed me up like gum, for example. I’ve never worked anywhere that went 100% cult on the first day. No game has ever done a better job at warping office culture into something too sinister to look upon. Don’t let the art style fool you, there are some proper dark forces in the mix.

Your life is changed forever when you get a letter in the mail, offering you a position at Sintracorp. Make no mistake, most people would kill for an opportunity like this one. From the start, you’re shown a thin slice of a cut-throat world, one where ascension is achieved at any cost. The people are cordoned into hardened social strata, a caste system that feels downright feudal. Though Yuppie Psycho takes place in this single office building, you catch constant glimpses of the larger world. Most of what you’re shown is rather grim. Even outside of the supernatural circumstances, holding onto this job feels like life and death.

Like any good horror game, you’re pretty weak. Without a steady supply of coffee, candy bars, and cheese sandwiches, you’re doomed. Rather than face your demons armed to the teeth, you carry a briefcase everywhere you go. Also, don’t face your demons. Run, hide, and live to fight another day. Any violence you successfully inflict on your tormentors is thanks to your environment. Yuppie Psycho kept me hugging the edges, scrounging for scraps, and soaked in blood. I never felt powerful, but I surely felt alive. The only horror mechanic that rusted my gears was the saving system. You need a consumable item to save, you see. In theory, this should add a certain level of tension to a mundane activity. But, said consumable was just plentiful enough that you were almost never in any real danger of running out. Without the tangible threat of running out of saves, the action seems extraneous. The action in question is photocopying your own face though, so it’s not all bad. 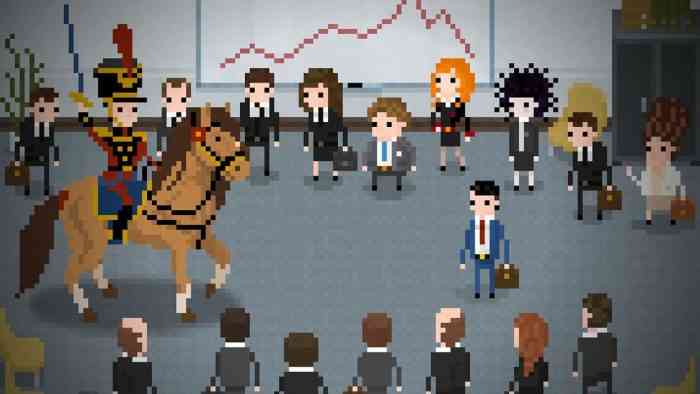 For a 2D pixel art title, I was sucking back dread with some regularity. Your coworkers are broken toys one and all, ashen husks absorbed in office sacrament and arcane madness. Staff can be found chewing on cables, crawling on all fours, painting with blood, and speaking in verse. Along the way, you’ll soak up tiny details about the Witch and her infectious evil. Every new rumor lengthens her shadow over your steps, with all you learn adding to your fear, panic, and despair. On top of that, there are her monstrous children to contend with.

Before you meet the Witch, there are a whole host of other horrors to face down. Printers sprouting hands, bloated spider beasts, and mouths riding pantsuits all stalk the floors in search of flesh. I appreciated the mix of cunning and quick reflexes required to take them all down, even if some extensive trial and error occurred. The upside to these grueling battles is that the solution is always within your grasp. The stage puzzles aren’t always so elegant, however. If nothing else, I floundered more in these wide-open levels than I ever did fighting the bosses.

I’m torn about the graphics. They’re dead simple, but this works in service of the game. The basic visuals mean that more focus is drawn towards things like the music and the writing, both of which are excellent. In fact, judicious use of specific musical cues were enough to bring my heart into my throat on multiple occasions. A single tone sounds, and suddenly the shadows feel deeper, more threaded with malice. Meanwhile, the dialogue whips from clever to cute to unsettling without missing a beat. In fact, the writing does double duty, creating a horrific atmosphere that’s still crusty with corporate dross.

Horror games need a little inconvenience to survive. If you’re not stressed out and pushed into a corner, you’re not able to get quite scared or tense enough for the full experience. To that end, this game’s more egregious mechanics are an acceptable sacrifice. The only downer for me was when that extra tension regressed into something more like annoyance. I don’t mind being sacred, I’m less into being frustrated. Don’t get me wrong, my times with this game were a spooky delight overall. The occasional dip in my enjoyment was a fair trade for the unsettling atmosphere, the fascinating narrative, and the clever premise. If you’re in the market for an unconventional horror game, I can easily recommend Yuppie Psycho. 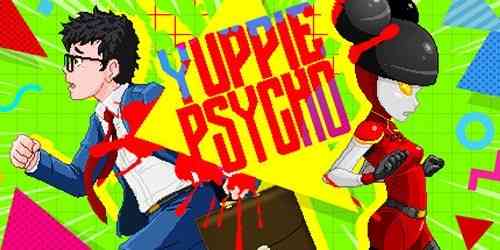