WWE 2K15 has arrived for fans to enjoy, and after last year’s less than thrilling edition I was hoping for a huge graphical overhaul.  The “new-generation” of consoles has what it takes to give fans the total WWE gaming experience and this is the perfect opportunity to catch up on the latest storylines in the WWE universe. I won’t lie; I have been looking forward to seeing what new developments WWE 2K15 had to offer in re-creating that “in-the-ring” experience.

When I first fired up the game I was immediately blown away with the huge improvements that Yukes has done with this title in the visual department.  I have to believe this is in part due to this year’s WWE game being a collaborative effort with Visual Concepts.  Visual Concepts are known for the NBA 2K series that have been visually stunning for many years now and they have some of the best, spot on representation of any human model ported into a video game I have ever seen.  Without a doubt their expertise translates in the WWE 2K15 looks department.  My complaint last year regarding the repetitiveness of the crowd is no longer viable as fans in the front rows actually look like people rather than cardboard and it is noticeable that they just didn’t recycle fans further back into the arena.  As for the WWE Superstars themselves, their appearances are sharper than ever.  Sure, there were a few moments where something just seemed off about someone’s face, like John Cena for example, his face all scrunched up like a pug, but that was far and few between. 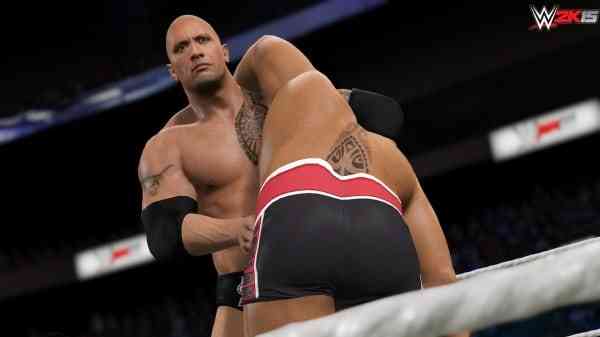 Graphics continue to impress with the Creation Suite that allows you to customize just about anything as you are now able to import your own photos and designs to create the wrestling star that you want. Stock customizations are what you normally see in most games with head, face, hair, eye colour, body size, clothing (tops, bottoms, hats, glasses, boots, etc.) along with the ability to add in graphics on any of the items along with switching up the colours, but with the added ability to import photos, feel free to run wild with your designs. Custom moves, entrances, statistics, signs and pretty much everything that you can imagine is yours to customize and design too.

Moving on to gameplay, WWE 2K15 features archived footage from the WWE that is integrated into Showcase, a mode where you can play out highlights of two different story arcs which look great in glorious HD and that give you a history lesson on some great past real-life stories in the WWE realm.  For this year’s game there is “Hustle, Loyalty, Disrespect” which takes you through the story of John Cena, the poster boy of WWE, and CM Punk, the voice for the voiceless, and their journey of ups and downs. The other storyline, “Best Friends, Bitter Enemies”, is all about Triple H and HBK after Triple H betrayed HBK to become the King of WWE where he has reigned quite a while. Showcase mode is a lot of fun for fans as you get to play through some iconic matches and perhaps learn a little bit more about some of your favorite Superstars.

Throughout the Showcase game mode I got to listen to lot of commentary from Jerry “The King” Lawler and Michael Cole as they called out the action, and I am happy to report that I didn’t encounter a huge amount of repetition, something that has been common in past games.  This can be attributed to the fact that there are five times more recorded lines than in prior years in an effort to negate repetition.  There is also a lot of voice work incorporated from WWE Superstars into the game from archived footage that adds even more authenticity. The music is pretty solid in the game too and I was surprised to learn that John Cena has curated the soundtrack himself featuring artists like Flo Rida, B.o.B, Florida George Line, and Wiz Khalifa. As a fan of John Cena I found that this was a nice touch and I would love to see more superstars pick some of their favourite songs to get pumped up on future titles. 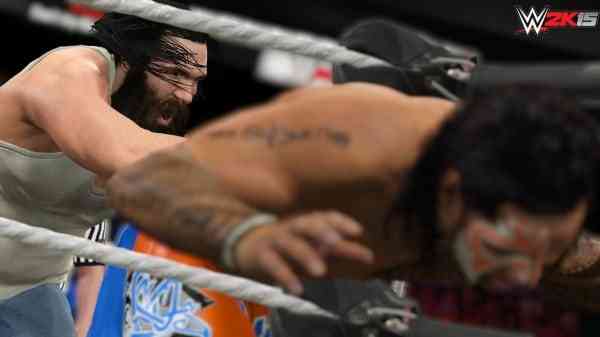 MyCareer is where you can take a created wrestler and start them off as a rookie and work your way from training, up through NXT, and finally on to the WWE Roster. During most of the review process and prior to the game’s launch we weren’t able to access this mode due to the game crashing as we tried to load up into My Career. That being said, I was able to wait until launch day and access this mode, as the server issues seemed to be fixed. This mode has a bit of a RPG feel to it as you create your character and train him through wrestling matches that earns you skill points that are used to upgrade your skills to make yourself a WWE Superstar. Virtual Currency is another form of building up your character where you can hire a manager, pay a WWE Superstar to train with (and even learn their moves) or buy some new moves yourself.  Even before you get to NXT you start in the training center which I wish they made optional because the voice over work is horrible, there is no background music, and it is just an introduction area for newbies to the system to get used to. Overall though this mode is going to appeal to fans who want as authentic of a WWE experience they can possibly have with their own created Superstar.

The controls remain the same from last year with one major change to the mechanics that introduces a mini-game called Chain Wrestling.  This new mini-game adds a tug of war feel to the grappling system.  Though this might be a bit annoying at first, keep at it as once you get used to it and see it in action it starts to make sense.  In the end this new gameplay feature is a welcome addition that prevents technical superstars from pummeling you with grapple after grapple. When you and your virtual opponent lock in for a grapple you are prompted with three different holds, and your opponent is prompted as well. This is where the wrestling version of Paper, Rocks and Scissors comes into play one hold is better than another. To be honest I found selecting my hold was more luck of the draw then anything else and didn’t change my strategy too much; however, the latter part of the Chain Wrestling is where more skill comes into play.

The best way to describe the second part of this new mechanic is that it is a thumb war of the analog sticks where you have to rotate the right analog stick into a sweet spot (indicated by a red dot) and when you hit it you hold the stick in place to expand the red dot and fill the circle up to gain advantage of the next move. Even if you get a bad draw on the hold you still have a chance of reversing it, although the advantage seems to go to the wrestler with the better grip. All in all I found this new gameplay element to be a great addition as it added some more depth to the combat system that is fairly technical when you need it to be.  For those that are worried about this technical aspect, you can still enjoy the game by pulling off strikes, submissions, and clothes lines which all feel quite natural (especially with the pop up prompts to help you along). 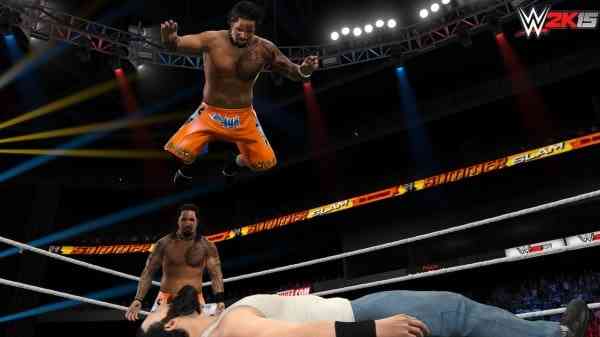 There are a huge variety of match types to be found in WWE 2K15.  You’ll find Extreme Rules, Falls Count Anywhere, Iron Man, Hell in a Cell, TLC, Last Mind Standing, Triple Threat, Royal Rumble, and 6 on 6 matches along with your basics like single and tag matches. You’ll also find the WWE Universe, a mode that is pretty much a GM mode where you get to set up rivalries, storylines, schedules, titles and alliances, and you can even participate in the matches while you’re at it to add some entertainment for yourself. This mode saw an overhaul last year with positive results, so there has not been too much improvement.  That’s ok though as it is still a great mode to have for super fans.

WWE titles have always been about the experience rather than the competition but if you’re a competitive type there is the option to play online against other players.  You can participate in One-on-One matches, Triple Threat, 4-Man, 6-Man or Diva matches and they can all be modified as to customize the experience.

WWE 2K15 offers fans of the WWE quite a bit of gaming goodness.  It has received a huge face-lift graphically and is getting closer and closer to looking like the real thing in every aspect of the game. The game shines with some great tweaks in the control department making it technical while maintaining a fun factor.  It also boasts a great soundtrack to keep you grooving while playing the game. And as one would expect, there is a boatload of modes to keep you playing for quite a long time and the highlight of the game is the MyCareer mode that gives you the virtual experience of what it is like to work up the ranks to become a WWE Superstar.  At the end of the day WWE 2K15 is a game that is worthwhile purchase for WWE fans and something that fighting game fans or sports entertainment fans may just want to take a close look at.