Book of Spells is the first game to come out that supports Sony’s Wonderbook peripheral which was first introduced at E3 this year.  Despite a demo that dragged on for too long and that was plagued by technical issues, I really warmed to the idea of Wonderbook after spending some hands on time with it (the mock living room with carpet and fireplace in Sony’s booth didn’t hurt either).  The first game to support Wonderbook comes from the Harry Potter universe and was developed in conjunction with J.K. Rowling herself.  Let’s take a look at Book of Spells and whether or not Wonderbook is something to be reckoned with.

The whole idea behind Wonderbook is actually quite simple.  The book peripheral itself is no more than a bunch of giant QR codes that the PlayStation Eye camera reads and transforms in to images on the TV screen.  Personally, I think the resulting effect is pretty brilliant.  Players interact with the book itself using the PlayStation Move controller and gesture controls.  More story than an actual game, the narrative (which is somewhat light despite being penned by Rowling herself) revolves around finding an old spell book in the Hogwarts library.  The player is then tasked with learning the various motion controlled spells through the course of reading this book. 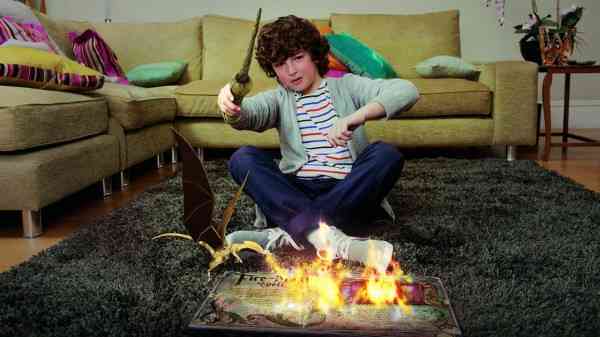 I speak about this frequently when doing Move reviews but the precision of the Move is really shown off well here.  Seeing your wand turn exactly with your hand motion or objects onscreen moving properly in relation to how you handle the book is awesome.  Yes, this type of thing has been done before to certain extents but what makes this so good is that, with the book on the floor between your legs, you are right up close to things and the movement controls are deliberate instead of wildly swings you see so often in motion controlled games.  This really enhances the effect of the one-to-one precision Sony touts for the Move.

If you’ve played Kinectimals, you will remember you were interacting with something that wasn’t there.  If you wanted to pet your Kinectimal, for example, you were petting air and using the Kinect to position your hand so that it matched the pet’s location on screen.  It looks pretty cool on screen but you really have to dig deep into the imagination vault to make it believable.  This is where Wonderbook is different.  Wiping off dust from the cover, for example, involves physically touching the book.  Having the book is physically there in front of you to touch and manipulate makes the experience all that much more believable.

With just twelve pages in the Wonderbook itself I was curious to know how Book of Spells was going to create an experience with any sort of longevity.  The story is broken in to five chapters which you select from a menu screen.  When you are finished each chapter you simply go back to this menu screen and start a new chapter which begins at the start of the book. So in theory you could have as many chapters as you want.  For obvious reasons the experience is single player only and there is no online play. 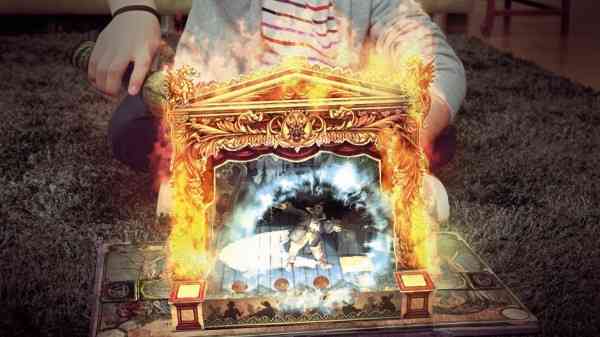 This first title for Wonderbook certainly has a degree of wow factor that one would expect comes along with a new way to play.  The intended younger audience will eat this up and fans of the Harry Potter series should enjoy learning 20 familiar spells and experiencing the various locales represented in the story.  If you have a Pottermore account, you can link it to the game for some extra goodies as well. How long the novelty of the actual Wonderbook peripheral will last will depend entirely on the quality of the software that supports it and the creativity of those making the games.  Even being a big fan of Harry Potter, Book of Spells got a bit repetitive and ultimately boring for this 30-something gamer.  And that’s the knock against Book of Spells as a game (or storytelling software, whatever you want to call it). Beyond learning spells and using them in some mini-games there is little more to be had other than the novelty of playing with something new.

From a graphical standpoint Book of Spells impresses more in how things are presented versus how everything looks.  A large part of what you are looking at is video of you sitting on the floor, your wand (the controller) and the Wonderbook itself.  Different chapters present different perspectives and points of view but the coolest part for me was seeing quasi-three dimensional images on the pages of the book.  It really is an impressive effect.  Pick the book up and move it around and whatever scene is on those pages reacts accordingly.  There is an incredible sense of depth to things. 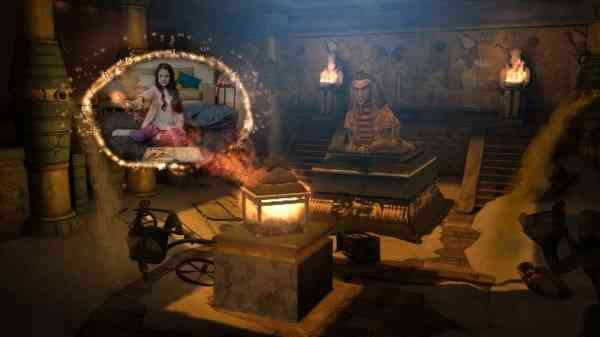 A mystical sounding score in Book of Spells would fit easily in the Harry Potter universe.  This is complemented by a very Hogwarts-professor-sounding narrator who guides you through the story and instructs you how to perform various spells.  While Book of Spells instructs players to say each spell’s incantation out loud whether or not the microphone array on the PlayStation Eye camera is really being engaged was unclear to me.  I was able to cast spells easily without saying the incantation.

Wonderbook: Book of Spells is not the deepest gameplay experience around, but the real star is the Wonderbook peripheral itself as it creates a totally unique storytelling experience.  Book of Spells is one of those games you bring out to impress your family and friends when they are over visiting.  In the end I see Wonderbook: Book of Spells as being a a hit with the kids and it is a good start for the peripheral that makes it all come alive.  Sure, there is certainly some room for improvement; however, the future is bright for future “books” that utilize this unique peripheral and I cannot wait to see what is next.