Wolfenstein: The New Order (Xbox One) Review – Ditch Your Other Shooters, This is The One to Own

Machine Games’ and Bethesda should be immensely proud of what they have accomplished. Wolfenstein: The New Order could quite easily be called the best shooter on the Xbox One to date. Yes it’s that good. Highly entertaining gameplay, deep storyline, varied combat, stunning visuals and a main character you absolutely love are just a few reasons why shooter fans should strongly consider taking the Wolfenstein: The New Order plunge. It’s not without some flaws and doesn’t include a multiplayer component which may disappoint some, but that shouldn’t hold you back from an experience you won’t forget anytime soon.

Wolfenstein: The New Order takes place in an alternate world where the Nazi’s have taken over, the Americans have surrendered, and futuristic machines of death keep everyone in line. The Wolfenstein series has always had a science fiction feel to it and New Order is no different. In fact, The New Order stays true to the Wolfenstein story arc in many ways. You play as badass soldier BJ Blazkowicz who wakes up from a 14-year coma where the Nazi’s have won the War and everything BJ held dear is apparently gone. Our fearless hero won’t stand for this, so he quickly links up with a group of resistance fighters as they embark on a journey to take down the powerful Nazi regime.

Sounds like standard Nazi killing stuff doesn’t it? Well, it is, but it’s also so much more. The New Order features a deep storyline that is told even further with the many newspaper clippings, letters and diary’s you come across in the game. Some of the dialogue and interactions between the characters is fascinating. Even the relationship between BJ and the nurse that brought him back to health is endearing. Bottom line, I enjoyed the story but I found the characters even more interesting. 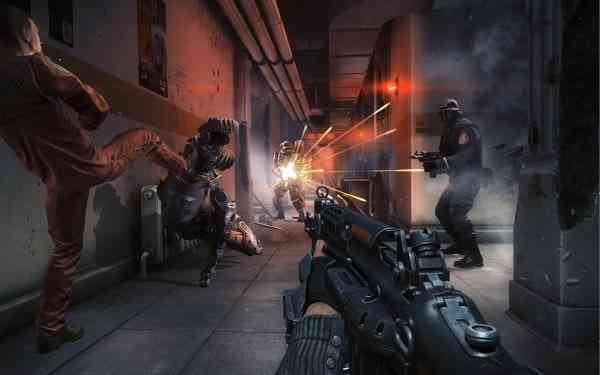 Early in the game you are forced to make some critical choices that impact both gameplay and story. I won’t give too much away but all I can say is choose carefully as one choice will give you the ability to pick locks, which grants you access to certain navigation routes and armour upgrades. While choosing the other will unlock hotwire ability which grants health upgrades and different navigation routes. Needless to say, the choice alone gives The New Order some replay value as you may just want to take the ride all over again just to see how things play out with a different choice.

Yet “the choice” alone doesn’t give Wolfenstein: The New Order replay value, it is all the collectibles you find in the game. If you think Bioshock featured a great deal of exploration and collectibles you haven’t seen nothing yet. You can hardly walk a few steps without picking up some ammunition, health, armor, enigma codes, letters, toys, trophy, etc. The list goes on and on. I am not quite sure how long it would take to collect every single item in the game but I am guessing it would take a while.

What good is a story, characters or collecting things be if the gameplay stinks, right? Rest assured folks, the gameplay is rock solid. It’s fast and frantic but easily some of the most fun I have had on the Xbox One to date. Right from the get go you find yourself dual wielding machine guns, manning turret weapons and shooting Nazi’s while scaling the side of large structures. As you progress you will unlock an upgradable Laser cutter that not only enables you to access different areas but is also used as a critical weapon to take down the many, and I mean MANY, enemies you will encounter along the way. 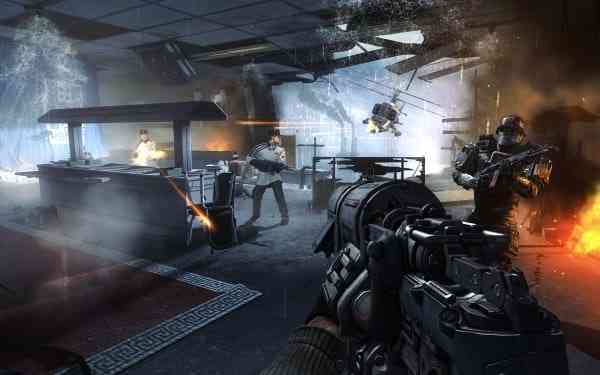 The controls in the game are tight and I found switching between the various weapons, dual wielding guns and launching grenades is handled with ease. Not to mention the weapons pack a punch so get ready for some pretty gruesome deaths. The developers didn’t hold back in the blood and guts department, that’s for sure.

The New Order features a perk system which may not be as involved as other shooters on the market; however, the system in place encourages you to engage in certain play styles by rewarding you with improved stats and abilities. For instance, I typically took a more assault based approach with my combat style. So the more I dual wielded machine guns the more the game rewarded me with, for instance, increased machine gun movement speed. It is a nice little system in place that doesn’t take anything away from the gameplay but only serves to enhance it.

You can take a run and gun approach and get by just fine. Yet The New Order also encourages you to take a stealth approach as well. Granted the stealth combat/mechanics isn’t as refined as it is in say the game “Thief” but it is still decent staying true to its stealth roots. Why you can’t hide or move bodies, or knock out a light bulb is beyond me. Regardless, the different ways you can take on each level makes the gameplay compelling and fun. Not to mention it is a challenge as well. The difficulty ramps up considerably as you progress. Yah, I died a lot!

When I played the Wolfenstein: The New Order demo at E3 last year, I wasn’t overly impressed with the visuals. They seemed generic and bland. Well that is not the case with the final build of the game. The character models are simply fantastic. They are incredibly life like and the facial expressions are bang-on. Likewise the enemies look equally fantastic. There are moments where I wished we would see a little more variety in terms of the enemies; however, at the end of the day each mechanical robot presented itself to be challenge and appear wonderfully detailed. 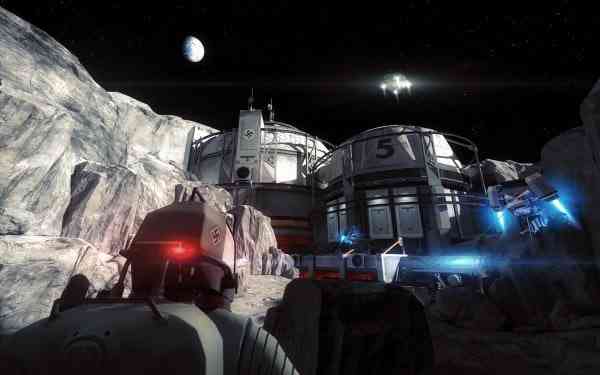 I was particularly amazed with the games varied level design as well. None of the levels seemed generic and the attention to detail is quite stunning. Missions in the game will take you under water, to the moon and everywhere in between. The dynamic lighting effects and shadowing is impressive. You could call this the best looking Xbox One game. If it’s not, it is certainly right up there. Granted, I did notice some clipping issues and other graphical glitches, yet overall the good outweigh the bad and Wolfenstein: The New Order is a game that delivers in a big way when it comes to the visuals.

Just as impressive as the visuals are, the sound is equally fantastic. For starters the soundtrack has a Pink Floyd meets Tool vibe to it. Okay, maybe quite a bit more Tool than Pink Floyd. Regardless it is bass heavy and really sets the tone for the action in the game. The sound effects and voice work is equally effective. BJ is the star of the show as he has some pretty funny one-liners throughout the game; however, some of those Nazi psychopaths also leave you with some disturbing dialogue you won’t forget anytime soon.

Wolfenstein: The New Order doesn’t reinvent the franchise or give us anything particularly innovative. Yet what it does do is excel at giving us a deep shooter experience unlike we have seen on the Xbox One to date. This visually remarkable game features memorable characters, a terrific soundtrack and frantically entertaining gameplay. Wolfenstein: The New Order is hard to put down and for good reason – it simply kicks ass.

Next Scram Kitty and his Buddy on Rails (Wii U eShop) Review – We Love Cats, Honest!
Previous MLB 14: The Show (PS4) Review – So Pretty Even David Ortiz Looks Good