Vindicta Review – Been There, Done That

Nowadays, virtual reality shooters are a dime a dozen. These games take a ton of flack as they are often perceived to be unimaginative and overdone. After all, there must be plenty more to do in first person besides shooting things, right? Personally, I believe there is still massive potential for the genre to grow – for developers to accomplish feats previously impossible in gaming. But for every great shooter that proves me right with its ingenuity and innovation, there are ten others that say otherwise. Unfortunately, Vindicta is one of the latter.

Vindicta’s first problem lies not in the plot – which is simple yet workable, involving an evil corporation and its army of killer robots – but in the protagonist, Agent V. With a gruff voice and an infinite supply of one-liners, Agent V is a little too reminiscent of the popular hero, Duke Nukem. However, unlike Duke Nukem, the writing here fails to spark genuine laughs. Like a bad cold, Agent V quickly becomes an annoying presence you can’t shake off. It becomes impossible to invest in the experience when there’s a grating voice quipping about every other headshot you nail. Such disconnect between the player and the protagonist is especially noticeable in VR, and immediately broke all sense of immersion for me.

The single-player campaign is surprisingly lengthy, totaling 5 to 7 hours of solid playtime. You’ll infiltrate UB Industries through five levels, each taking place in a distinct part of the huge facility. There is a wide variety of weaponry to play around with – like pistols, shotguns, and swords – all of which are a blast to use and can be dual wielded for maximum carnage. Sadly, the enemy AI lacks the challenge to match the array of weapons at your disposal. Most robots will happily stand in place, waiting patiently to be shot. Spider robots and aerial drones spice up the variety, but they take little more than a bullet to bring down, making them more of a nuisance than a genuine threat. Little tactic is required in the way of combat, as enemy fire can easily be avoided if you stay on the move. The robots you face over the campaign differ little from the ones in the initial five minutes, quickly leading to a feeling of repetition, and I found myself wishing developers Game Cooks had instead aimed for quality over quantity.

“Often, I’d raise my arms to shoot, only to accidentally make contact with the thumbstick and instead get propelled through the environment”

Vindicta boasts an unconventional locomotion system. To move, you hold down the thumbsticks and swing your arms. This is a great idea in theory, as it keeps the player active and engaged in the action. However, as the default locomotion method allows movement only in the direction you face, such a system hinders the core gameplay, effectively prohibiting you from running and gunning, strafing, or maneuvering into cover. The second locomotion method works much better, freeing up movement to whichever way you swing your arms.

I can’t speak for the Vive, but I do not recommend either control schemes on the Oculus Rift. The thumbstick detection on the Oculus Touch is far too sensitive for such locomotion to be viable. Often, I’d raise my arms to shoot, only to accidentally make contact with the thumbstick and instead get propelled through the environment. This resulted in major nausea, as I was always being moved involuntarily. The third and final locomotion method is by far the most practicable, using only the left thumbstick for movement. Inexplicable, none of these options allow for snap turns, and since Vindicta requires room-scale, this means Oculus users with only two sensors will be unable to play. 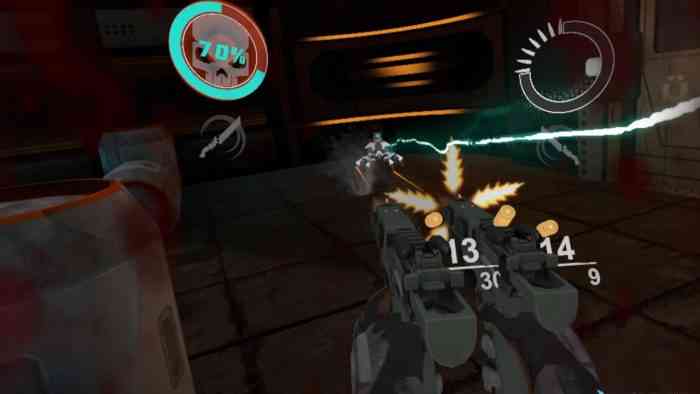 It also doesn’t help that everything in Vindicta looks rather rough around the edges. Levels are essentially a series of long corridors and empty rooms with sparse cover mixed in. The bland, blocky environments feel beyond dated. Enemy design leaves a lot to be desired, with the different types of robots appearing identical to the ones before, albeit with a different coat of paint. Overall, the apparent lack of detail not only looks bad but ultimately detracts the player from immersion.

Being an Early Access title means Vindicta comes with a healthy dose of bugs – many of which are game-breaking. Halfway through the game, I had already lost count of the number of times I fell through the floor or got stuck on map geometry. Hit detection plays a little funny, as I was often hit by enemy fire despite being behind solid walls. On a few occasions, critical key cards failed to spawn, forcing me to reload the last checkpoint. Luckily, developers Game Cooks push out regular updates and bug fixes. During the course of this review, they fixed a bug which made gripping items with the Oculus Touch a complete nightmare.

“In fact, Vindicta would’ve been a decent title had it launched a year sooner, before the release of superior shooters such as Robo Recall and Raw Data.”

Don’t get me wrong, Vindicta is a perfectly serviceable game. There’s definitely some mindless fun to be had in dual-wielding assault rifles and gunning down robots. In fact, Vindicta would’ve been a decent title had it launched a year sooner, before the release of superior shooters such as Robo Recall and Raw Data. But at this stage of virtual reality, when users are starting to expect a higher degree of quality and innovation, being perfectly serviceable simply isn’t enough. 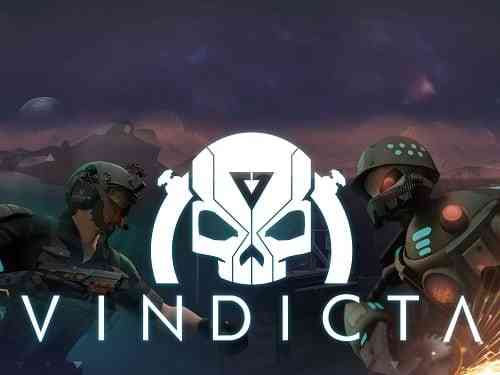