A couple of weeks ago I get an email from a fellow editor asking me if I can do review duty for Velocity 2X. I had never played the original game. In fact, I’m not sure I was even aware of it. Oh boy am I glad I was turned on to this game. This game is fantastic. A lot of games try to combine an old-school feel in a current package. Velocity 2X hits that nail squarely on the head. It is both simple and complex in complementing ways and incredibly difficult to put down.

Velocity 2X picks up after the events of Velocity Ultra. Playing as female protagonist Kai Tana, the story unfolds via stylish cut scenes in between levels. Without giving away much of the plot, after being captured (and woefully underestimated) by a powerful alien race, Kai must escape and do battle against said enemies.

Game play is divided in to two formats: top-down, flight-based shooter sections and all-new, on-foot, side-scrolling platforming parts. The mechanics of the top down shooting sections translate seamlessly in to the on-foot platforming sections. In fact, both elements mesh seamlessly together within levels (its awesome). Sprinting, jumping and teleporting combine to make for some furious button mashing. Teleporting takes some getting used to during the flight segments. When it all comes together and your timing is right it feels amazing. You’re going to have to have some quick fingers to hit some of the gold completion times.

Additional abilities and enhancements are doled out at just the right pace to keep the game play fresh and the player challenged with new tasks. I whipped though over a third of the game’s fifty levels in my first hour alone. Levels get more complex (and longer) as you go but you can expect to get through V2X in a matter of hours. Of course there is built in replay-ability in that you are scored across three or four parameters on each level. Returning to get that gold time standard is tempting even for me. 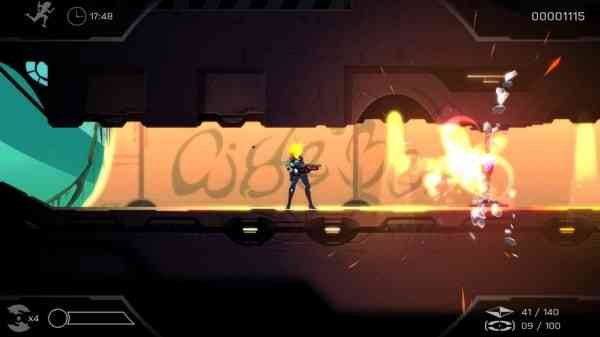 Velocity 2X is the type of game that’s extremely difficult to put down once you start. There’s little if anything to complain about. Velocity 2X hits the old school game play feel just right, the graphics are stylish and the sound track fits perfectly. There’s plenty of value in its $20 price tag. If you’re a subscriber to PS+ it gets even better because this month the game is free. In fact, I’d think you’re a bit crazy if you’re on PS+ and don’t get this game as part of your instant collection.