Through the Darkest of Times Review

I play a lot of games that star people that murdered my ancestors. There are lots of fun games about medieval history, ancient Rome, Eastern Europe, and Russia. And at various times (most times really), those places were a pretty hostile place to be Jewish. In the 20th century, my family was rolling with the socialists and the communists, and that brought heaps of trouble upon them. I’ve been thinking about that family history a lot in the context of our current political climate, and along comes a video game that sees my ancestor’s legacy, and does not flinch away.

Through the Darkest of Times is at its core a management game. It takes place in Germany during the rise of the Nazi party, from 1933 to 1939. You play as a resistance leader living in Berlin, trying to unify a group of Jews, Catholics, Communists, union workers, Anarchists, all sorts of people that, you know, didn’t get along with the Nazis. You do this by placing your agents on a map of Berlin to accomplish missions, and then roll skill checks to see if you’re successful. 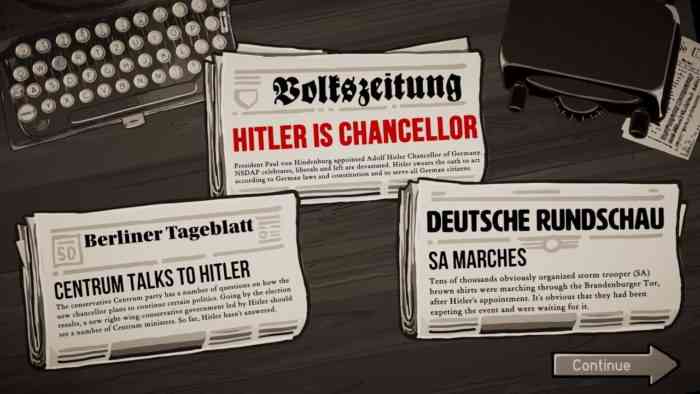 This central gameplay loop is buffeted by RPG-like segments where you pick dialogue and make personal choices for your central character. The two systems blend together, and your choices in either can affect your options moving forward. These choices are always political (obviously) and also personal, and the writing goes out of its way to reflect current times.

That writing can sometimes feel a bit clumsy. That’s not to say that there aren’t obvious connections, but I’m still parsing how I feel about the Nazi propaganda machine being called “fake news.” It’s not that I disagree with the political parallels or think the game was wrong to make them, but the point would have landed just fine without getting so explicit. But maybe subtlety is just something that needs to go out the window when you are dealing with Nazis. 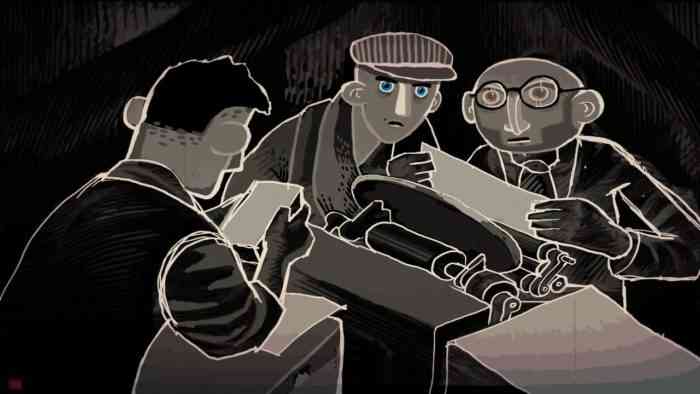 And what the writing lacks in subtlety it more than makes up for in well-researched history. Every turn starts with a set of newspaper headlines, specific to the historical month in question. The story is paced along with real history. Even though I am more than familiar with the era, I found myself learning a lot. I knew that Hindenburg was the one who appointed Hitler as chancellor, and I knew about the Hindenburg disaster, but I never knew how the two were connected. (Though in hindsight, it seems pretty obvious.) The blunt script doesn’t take away from the intelligence in the plot.

I found my first playthrough of the game to be an effective and harrowing experience. My second time through was where I started to see the flaws in the game design. After playing a randomly generated character, I wanted to create one who more closely resembled my granddad, who was a communist and a carpenter. I was a bit surprised to find that there is no character creation whatsoever. You get to choose a hat and facial hair, all of which looks particularly memorable with the games moody art style, but all other traits of your character are randomly generated. I pressed the random button dozens of times before I got someone close enough. 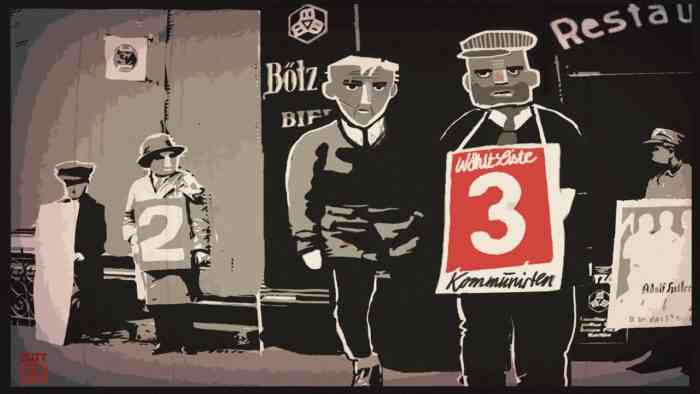 It was in that playthrough that I learned how little your choices actually matter. Through the Darkest of Times is certainly a game, but it’s not one where branching narratives and choice are all that important. And that’s fine. The linearity of Half-Life and Uncharted doesn’t prevent them from being great games. But it did make the dialogue choices feel a bit disconnected from the more strategic part of the game.

So, I had to take a step back and rethink what kind of experience Through the Darkest of Times was going for. The management and RPG style made me think of a digital board game like Antihero, but really it plays more like a visual novel — a genre that leans hard on player interaction to involve you in the story. And in that, Through the Darkest of Times was quite effective. I did feel for the struggle of these people in a way that felt more personal than if I was watching a movie or reading a book. The choices didn’t lead to branching stories, but the very act of making a choice placed responsibility for the consequences on me. That’s an extremely effective game design!