If you know what a Chocobo, Moogles, Airchips, and Materia are, chances are you’re a Final Fantasy fan. If you’re not sure what those are, Final Fantasy is a very long running RPG game series that spans multiple games and is safe to say that they contain some of the best gaming music ever. Threatrhythm Final Fantasy Curtain Call (simply referred to as Curtain Call from here on) celebrates over 20 years of Final Fantasy’s legendary music. Curtain Call is the sequel to Theatrhythm Final Fantasy and improves many aspects of the original with a huge track list of over 220 songs, over 60 playable characters from almost every Final Fantasy game ever, and new game modes that create a truly fun and addicting experience for fans of not only Final Fantasy, but rhythm games as well.

The story to Curtain Call mimics that of its prequel almost exactly. There is a good force, Cosmos, and an evil one, Chaos. Between these two is a place where everyone exists is called Rhythm and contains a crystal that is the source of music. When Chaos comes and disrupts the balance of the world, Cosmos sends her soldiers, Final Fantasy characters, to restore balance by collecting Rhythmia. When you complete stages in the game you earn Rhythmia, more or less based on how well you perform in each stage. Collect enough and you’ll finally confront Chaos and hopefully report balance to Rhythm once more. Even though it’s essentially the same exact story from the previous game, Curtain Call is all about its gameplay, and even though Final Fantasy’s are known for their epic plots, that’s not why you’ll be playing this one.

Gameplay is mostly unchanged from its predecessor and you’ll be able to jump right in and understand how things work if you’ve played music games before. There are multiple types of notes you’ll have to accurately hit. Red notes are a simple tap of the screen, green notes have to be held down for its duration, and yellow will give you a direction to swipe your stylus in. Combine these together and place notes to the beat of classic Final Fantasy tunes and you have yourself Curtain Call.

Interestingly, there are four different ways you can actually play, and there’s no penalty to using whichever you prefer. Touch has you simply using the stylus for all inputs, Buttons have you using the D-pad and buttons, Hybrid is a mixture of both, and One Handed is for the true masters. There’s no need to pick which style you want before playing as well, as you can switch from all buttons to stylus and vice versa whenever you want, so find what works best for you and play the way you want to. 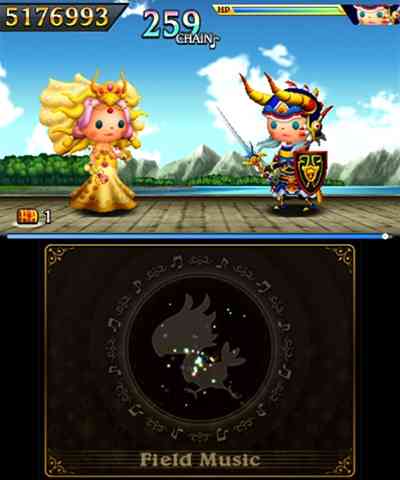 As you begin you’ll create a team of four characters, each with their own stats and unlockable abilities. While certain characters have specific strengths for different types of levels, you’re also welcome to simply choose a team of characters you like should you wish. Once you have your team you’re off picking songs you want to play, of which will come in three different forms: Battle Music Sequence, Field Music Sequence, and Event Music Sequence. New to Curtain Call is also an Airship Sequence that can be purchased and played as well via 3DS coins.

In Battle stages your team of four will be on the right hand of the screen with the enemy on the left, akin to classic Final Fantasy. Circle notes will trail along the screen left to right and you need to hit them appropriately when they reach your lane. Each successful note played will attack the enemy and critical hits will happen when you play the note in perfect timing. As you damage the enemy they will eventually die, spawning another to kill with oncoming notes. Each time you defeat one they can drop extra treasures and bonuses that you’ll gain at the end of the stage.

Field Music Stages play out a little differently. These songs are usually the calmer and overworld-type of music from the games and will have your party leader walking across the field. There’s only one circle you need to watch out for but the big difference here is that the hold notes aren’t simply straight lines, but waves instead. You’ll need to move your stylus or D-pad up and down with the track to score appropriately. Instead of fighting monsters, you’re instead trying to run as far as you can, and the more distance you cover the more bonus items you can earn.

Event Music Stages are slightly different as well and don’t actually show your party on the screen at all. Instead, these stages has an iconic video from whichever Final Fantasy you’re playing the music of in the background as the notes move all over across the screen. This means you’ll need to pay extra attention as you’re not simply watching for notes coming in the same direction, having to rely on the music beat more so than the other stage types. 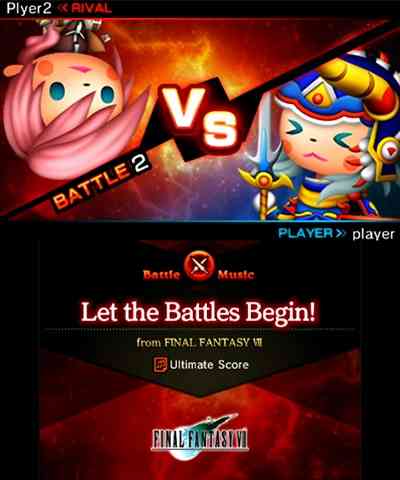 So you already had Theatrhythm Final Fantasy and want to know what’s new in Curtain Call? Surprisingly, the whole track list from the first game is included (minus a song) bringing the tally of songs to over 220. New songs have also been added, and while there are too many to note, there are some exceptional additions now that Curtain Call is also including Final Fantasy games that the previous didn’t such as Final Fantasy XIV: A Realm Reborn, Final Fantasy VII Advent Children, Final Fantasy XIII-2, Lightning Returns, and even the often forgotten Mystic Quest. New characters are also added in Curtain Call, some of my favorites being Barret Wallace, Zack Fair, Noel, Kreiss, and more.

Not only is the roster and song list larger and more complete, but there’s also new modes as well. Versus Mode allows you to battle AI, local friends, or even online to see who can get the most points in a song. The twist? When you fill your EX Burst Gauge, you’ll use a random ability against your opponent (and they’ll do the same to you) that can vary from sped up notes, swapping HP, causing slide notes to rotate, and more. I was unable to find anyone playing online before launch for this review, but I can see this being addicting to play online, especially once you become very good at the game.

Easily the best addition to the game though is the new Quest Medley Mode which will have you taking on short, medium, or long quests to get to a final boss, the catch being that your team’s health won’t regenerate, so you’ll have to bring a good party and use items along the way to make it. Defeating bosses earns you special loot and crystals to unlock new characters along with a massive amount of experience and other treasures. I become very addicted to this mode and was what I was solely playing for quite some time.

Lastly, you can now also collect special cards as you complete stages which allow you to permanently power up your characters. The CollctaCard Crystarium is where you’ll choose up to 8 cards that range from common to rare, all in an attempt to boost the stats of your party. The rarer the card the better boost you’ll gain, though almost every card has a chance to fail, so make sure you increase your success rate by choosing sets of similar cards.

I find that with rhythm games I become bored of them either once I master the mechanics or play the same song 100 times. This isn’t the case with Curtain Call, at least not yet, maybe because Final Fantasy music is so icons and some of my favorite in all of gaming, or maybe because I’ve still got a long way to go to master the mechanics completely. Seriously, Ultimate difficulty can be brutally difficult, even more so if you want to master playing it in a different style.

With a song list this large and almost every major Final Fantasy character there’s ever been, wrapped up in an incredibly cute art style, Curtain Call is an absolute fan server for Final Fantasy diehards. I’ve already put an obscene amount of time playing which says a lot as I don’t usually do a lot of handheld gaming. Simply put, I’ve been unable to put Curtain Call down. If you enjoy Final Fantasy and rhythm games, I highly suggest you snap up this game and experience some of the best music gaming has to offer.