The Legend of Zelda: A Link Between Worlds (3DS) Review – Another Great Action/RPG for the 3DS

Growing up in the days of Super Nintendo, I remember the excitement surrounding the release of The Legend of Zelda: Link to the Past in my household. After the extremely disappointing Zelda II my family and I were all very eager to play this beautiful, colourful top down adventure. I spent countless hours and many late nights questing through Hyrule and the Dark World, discovering every secret, playing through every dungeon over and over, and it rightfully earned a place as one of my all time favourite games. You can imagine my excitement when Nintendo announced earlier this year that it had developed a long awaited sequel, appropriately titled The Legend of Zelda: A Link Between Worlds, taking gamers back to Hyrule in a nostalgic adventure on the 3DS platform using a brand new 2D puzzle mechanic.

The story of A Link Between World draws many comparisons to the plot of Link to the Past, but it still remains fresh and full of interesting twists that will surprise.  I have provided a fairly good summary below, but if you don’t want to know any of the plot points skip the next two paragraphs.  Consider yourself warned.

At the start of the game we find our hero Link sleeping in his bed, only to be woken by the adorable Gulley, the blacksmith’s son, urging him to get up and get to work. Upon arrival at the blacksmith’s shop, and a brief encounter with the Captain of the Guards of Hyrule Castle, Link scurries to find the Captain to return his forgotten sword, only to find that he is paying a visit to the Sanctuary. Things go downhill fast, the Captain and the Sanctuary priest’s daughter Seres are locked inside. Link, armed with the Captain’s sword, finds a secret passage in the graveyard, makes his way inside to rescue them only to be greeted by the sorcerer Yuga, who has the ability to turn inhabitants of Hyrule into two-dimensional paintings, and Link finds that he has done this to the Captain and Seres. Link is knocked unconscious by Yuga, and when he awakes, finds himself at home, rescued by a strange little man wearing a rabbit mask by the name of Ravio. After agreeing to allow Ravio to stay in his home and set up show, he is rewarded with a mysterious bracelet. 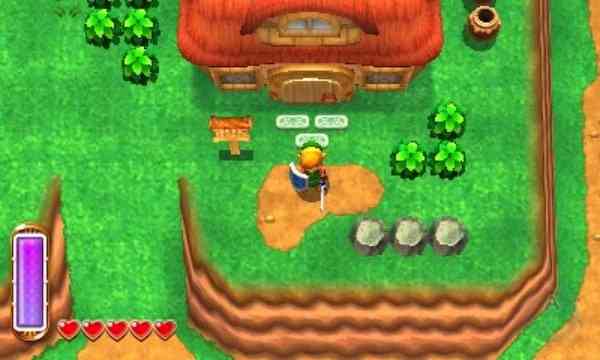 Link is called to Hyrule Castle to meet with Princess Zelda, who tells him what he must do to defeat the wretched Yuga. As he sets forth to collect three pendants that will allow him to use the Master Sword, Hyrule Castle is overtaken by a strange and mysterious force, and many residents are disappearing, including the young Gulley. Link encounters Yuga again, who turns him into a painting. The powers of Ravio’s bracelet are revealed, as grants Link the power of jumping in and out paintings allows him to walk within the walls. As the story unfolds we discover that Princess Zelda is in trouble, and it becomes clear that the Yuga has his sights set on her. Armed with the Master Sword, Link returns back to Hyrule Castle, only to find that Princess Zelda is in the clutches of Yuga, and is turned into a painting herself. Yuga slips away with the princess, and Link follows through a strange crack in the castle walls, bringing him to a parallel world, this time called Lorule, a dark version of Hyrule.  Here, it is revealed that Yuga is collecting the descendants of Seven Sages who sealed the dreaded Ganon away in Lorule, and he is planning on using them to revive the evil demon.  Link sets forth in Lorule to rescue the Princess Zelda, Gulley and the others before Yuga’s evil plan is carried out.  Phew, did you get that all?

The controls of A Link Between Worlds felt surprisingly tight and this was quite evident with the first swing of Link’s sword. Those who have played Link to The Past will feel right at home as A Link Between Worlds uses a similar button scheme. Surprisingly, the stylus is not used in combat at all, although the touchscreen can be used to view the map and select items to use in the X and Y button slots. I was pleasantly surprised to find that the overworld map is the exact same as it was in Link to The Past, with the Lost Woods in the far left, the desert to the right, and the Death Mountain looming over Hyrule up top.  However, the dungeons, 10 to play in total, have been completely revamped, with strange and weird bosses to fight and a ton of new puzzles to solve 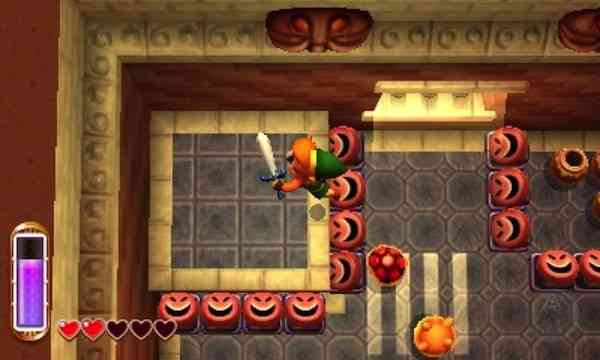 One of the most drastic changes to the game is the way items are acquired and how they are used.  In past Zelda games one was forced to fight their way through a dungeon to get a powerful item, usually found in a giant chest after defeating a mini boss, or purchasing bombs and arrows in store only to have them run out in the midst of battle. While some abilities and items are rewarded in quests, such as the Pegasus Boots, the majority of items this time around can be rented for a small fee from Ravio, and they can eventually be purchased, eliminating the need to visit dungeons in sequence. Some may think this is a welcome change, but personally, one of the joys of any Zelda game is the hours the spent exploring a dungeon, and the sense of accomplishment when you finally get that special item you fought so hard to obtain. It takes away a little of what makes a Zelda game so enjoyable. I’m not sure how I felt about playing through dungeons in any order you want, which is a departure from the past games. The non-linear gameplay was a bit strange for a veteran Zelda player like myself. However, I did like that once bombs and the bow are in your possession you never run out as all items rely on a magic meter on screen that simply needs to replenish before using the item again. The rental system does add an additional incentive to not die too, as Ravio will swoop in and scoop his rental items at the game over screen, and you are forced to shell out more rupees to rent what you need again.

One thing that I really did appreciate is the new fast travel system as it eliminates the need for the long tiresome journey across the map. A new take on the staple “Link to the Past” warp tiles, I thought that it was extremely well done, and quite interesting, how the fast travel was incorporated into the plot. Link meets a witch’s apprentice Irene, (later revealed to be one of the sages descendants), who gives him a bell to call her whenever he needs a lift on her broomstick, dropping him at one of the weather vane save points found throughout the map. 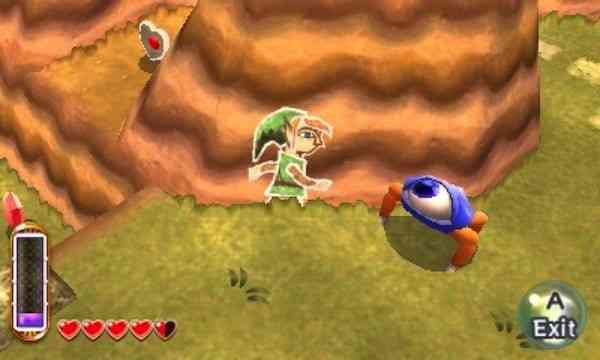 Perhaps it’s because I’ve played Link to The Past, but I personally found the difficulty of A Link Between Worlds to be a bit on the easy side, although it does ramp up as the game progresses. The puzzles never really presented too much of a challenge for me personally, light a torch here, fire an arrow there, often finding myself breezing through them; the exception being the puzzles that used new wall painting mechanic, I will admit that I was left stumped at times. The 2D wall walking really does add an interesting new twist on the traditional way of solving Zelda puzzles, figuring out how to get around an obstacle in the environment and figuring out how to cross a chasm in a dungeon. The dungeons are not the epic long journeys they once were, and many can be completed in under an hour, although I suppose it is quite fitting for a handheld game that can be played during a lunch break or a commute home from work. And for those new to the series and who may be tested by the games puzzles, the newly added Hint Spectacles, once acquired, offer great assistance in solving them.

Staying true to Link to The Past, Link Between Worlds offers the same top down view as they journey through Hyrule and Lorule, using the same art style, yet beautifully reimagined in 3D. The enemies, the environments, the trees, the people you encounter, even Link himself, now look beautifully detailed, yet still feel familiar, a wonderful mix of old and new. I am not a fan of using the 3D slider on the 3DS, but Link Between Worlds is one of the few games that really make it a must. When in use everything looks quite stunning, really adding to the beauty of the game, and it can be extremely helpful when trying to solve a puzzle,  I think of the view when crossing the bridge to the Tower of Hera, the 3D effect really gave me the feeling that I was on a tower of dizzying heights with flowing lava streaming dangerously below. This is no doubt one of the best looking game on the 3DS to date, and best played on a 3DS XL to fully take in its gorgeous graphics. The soundtrack too has been beautifully reimagined, using many of the tunes from the original, but now fully orchestrated. Fans will be pleased that all of the familiar sounds remain such as the little tune when opening a chest, the satisfying sound when you’ve discovered a secret, and even the little “oomph” when hitting an enemy with your sword.

I truly enjoyed my experience with The Legend of Zelda: A Link Between Worlds and consider this a must buy for any Zelda fan or 3DS owner.  It brings some interesting, perhaps not always welcome, changes to the traditional gameplay, but the new 2D wall walking mechanic offers a refreshing twist on the puzzles that Zelda games are well known for. Despite lacking the challenge of other titles in the series, fans will appreciate the nostalgic music and graphics, and enjoy playing through the new dungeons and boss battles that can be easily tackled on the go.  This is a fantastic game, nearly perfect, taking it’s place as one of the greatest in the franchise, and it is  no doubt one of the best handheld games ever made.