Dragonborn is the third DLC to be released by Bethesda for Skyrim, the amazing role-playing game that came out in 2011.  With Skyrim now being over a year old, and considering the swarm of great titles released this fall, Bethesda would have to give us something really special to suck us back in after all this time. Fortunately, I am glad to say that Dragonborn hits the mark.

The first big addition to come with the Dragonborn DLC is that all the new quests take place on the island of Solsthiem, a coastal island just off the coast of the Dunmer (Dark Elf) homeland of Morrowind. Solsthiem is actually the same island that was featured in the Elder Scrolls III Bloodmoon expansion.  While the northern parts of the island have the same Skyrim feel, the southern regions are more in line with a Morrowind influence. If you look off in the distance to the south you can see Morrowind’s massive red mountain, a volcanic mass that is constantly erupting. This leaves the southern half the island covered in ash, and is inhabited by new enemies called the Ash Spawn. Another area taking cues from Morrowind is the major settlement of Raven Rock, a mining town largely inhabited by the Dark Elf people and features their unique style of housing. Also on the south coast of the island is the home of a great Telvanni wizard named Neloth, who lives in giant mushroom. Yeah, it’s awesome.

And while the northern parts of Solsthiem and the dungeons have that familiar Skyrim feel, there are plenty of new enemies, puzzles and loot to keep things fresh.  The dungeons themselves have some really unique puzzles to solve that keeps things interesting; and most caves are populated by little goblin like creatures called Reiklings, who throw spears and ride boars into battle. Unfortunately, you can’t use their spears as a new weapon, but there are four new armour types that can be found and crafted, and tons of unique weapons and armour sets. There are also new dragon shouts to discover and powerful black books to read. 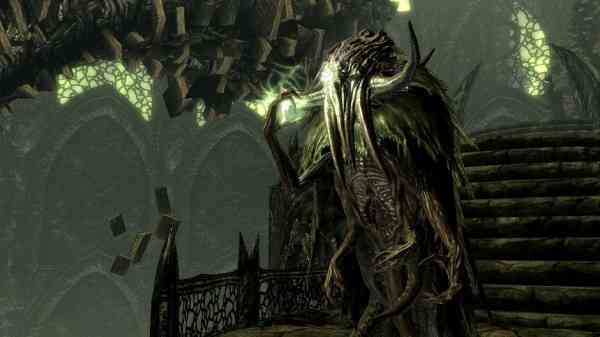 The black books, by the way, are another great feature introduced in this DLC. By reading these black books you are transported to Apocrypha, the Plane of Oblivion where the Deadric prince of knowledge Hermaeus Mora resides. Each of the Black Books open a new challenging dungeon to complete with an impressive reward at the end. Each book also bestows a new power or boon on you that you can use, boosting different attributes or increasing the power of some of your dragon shouts; or even allowing you to summon a Demora servant to carry your stuff for you. It is also in this realm that you will encounter Mirrak, the first Dragonborn.

Shortly after arriving on Solsthiem, you will notice that some of the settlers are not quite right. They seem to be under some form of control that forces them to build shrines around the island. After some investigating, you discover that the man behind this is a dragon priest named Mirrak, who ended up turning on the dragons and was long thought to be dead. Turns out he was just biding his time in Apocrypha, and he now has a plan to escape and control the world – unless you stop him.

The Story quest is actually a lot of fun to play out, and will take you through some great dungeons. You will meet a Nord tribe called the Skaal during your investigation to discover Mirrak’s source of power, and how to stop him.  The main quest could be blown through rather quickly, but there are lots of great side quests scattered throughout the island that will extend your playtime considerably. 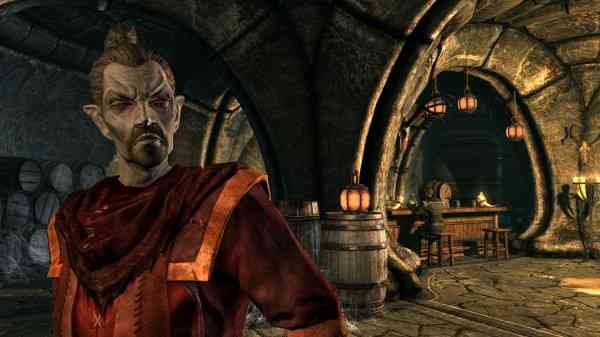 I do have some minor complaints though. One problem that I assume comes from having a massive new island to play on is that you can’t fast travel between Solsthiem and Skyrim. You need go to Windhelm or Raven Rock and take a boat, which also has a lengthy load time.  This makes trying to go to your base of operations in Skyrim rather time consuming. Fortunately, this is off set a bit by receiving a manor in Raven Rock as a quest reward, that contains everything you would need.

The other disappointment is in the new shout that allows you to ride dragons. You only get to literally ride a dragon (on rails), so you have no control over it’s flight. The only thing you can do is highlight targets and tell the dragon to attack, or sling magic spells off the creature’s back. You can fast travel to different areas to take your dragon with you, but major cities are off limits. Dreams of sailing across the lands of Skyrim on the back of a dragon, leaving destruction in your wake will have to wait for another time.

Complaints aside, the Dragonborn DLC is really great.  There is lots of new areas to explore and items to craft and find. The main quest can take about six to eight hours to complete, but there are tons of great side quests and ruins to explore that add about twenty plus hours to your playtime. This truly is a Skyrim expansion pack, and is a great purchase for any fan of the series who’s hungry for a new adventure.