I had the opportunity to check out a demo of The Amazing Spider-Man with fellow staffer T. Houston (aka – MRBIGCAT) at E3 in early June.  I have to say that as a relative newbie to the franchise I was pretty impressed with what I saw.  It seems that the series has been rebooted somewhat, as Beenox told us that given the upcoming reboot of the movie franchise, it gave them an opportunity to hitch a ride, so to speak, and do some rebooting of their own.  So, is this game going to be worth your time? In a nutshell I would have to give an approving nod and say yes.

The Amazing Spider-Man is a game that is meant to supplement the soon to be released movie.  The events are an after-story as they follow the events of the movie, so you won’t be playing a virtual recreation of the movie’s story.  I am glad that is the case, as many licensed games that are based on movies have a tendency to mirror the events of the movie they are based on, and they can become too boring and predictable.  The game’s story involves Oscorp executive Alistar Smith continuing to play God and trying his hand at cross-species experiments.  Needless to say, not all goes well, and the citizens of Manhattan start to get infected as the experiments run amok.  In an effort to control all that is going wrong, Oscorp develops a series of robots to monitor and take out any cross species they pick up on their radar.  Well, I am sure you have figured it out, that doesn’t go well either.  It is up to our friendly neighbourhood Spider-Man to take care of all that is going wrong in Manhattan.  Overall the story is fairly good, and it may keep your attention, but in the end this game is really all about combat, exploration, and having some good old web-slinging fun. 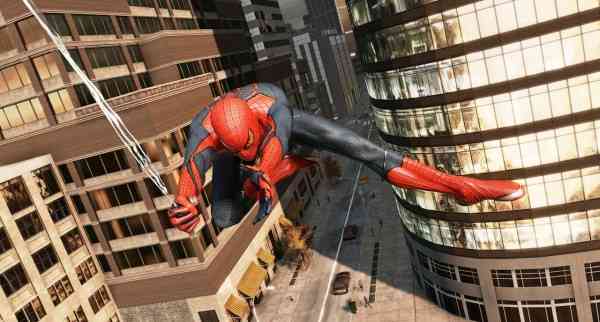 The Amazing Spider-Man is a single player free roaming experience in an open world setting.  If you want you can decide to just take on the main missions or you can take on the additional side quests for that added longevity.  There are a total of 13 single player chapters, but as you can swing all around Manhattan you’ll find a lot to do then just the main story objectives.  Regardless of what you do, you will stop petty crimes, assist in stopping car chases, save infected civilians, or just mindlessly collect comic book pages or take pictures around the city just to name a few things.  In regards to the comic book pages, should you take the time to collect the pages that are randomly placed throughout the city, you will open up fully licensed and digitized copies of some classic Spider-Man comics.  This is a true “fan-service” for the diehard Spider-Man fans.  Overall, I figure it should take anywhere from 25-30 hours to do everything, and yes I mean everything, in the game.

Although there is a lot to do, and there is fun to be had at it, there is one thing that I noted; some of the missions and boss fights felt repetitious now and then.  As there are two of us reviewing the The Amazing Spider-Man games I did confer with my fellow staffer, and low and behold he felt the same way.  Some of the missions came down to “clean an area of enemies, find new area, clean out more enemies, and then fight the final boss”, which was either a main villain or a substantive amount of enemies in one area.  Don’t get me wrong, it was not like this all the time, but it was something that I did feel happened more then a few times, and I wanted to mention this.

One of the biggest highlights of the game is what Beenox has coined Web Rush.  This is a new game mechanic that allows you to make navigation changes in real time.  So, whether you are swinging around the Manhattan skyline or taking on a group of baddies, you can use the new Web Rush to assist you in any way you may need.  To describe it, Web Rush pauses the game and allows you to select a location within sight and you can quickly travel to that point.  It is a simple idea but mastering it will take some time.  I for one loved the way that I could get from point A to point B, or out of trouble, by following one of a few paths to arrive at my end point.  I think that many Spidey fans will enjoy this new feature as it really shows of the abilities and moves that the web-slinger is famous for. 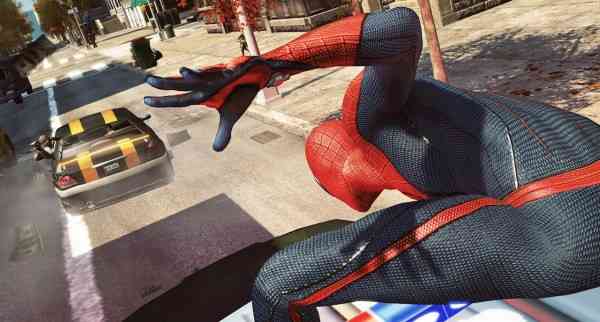 Fighting the enemy AI was quite fun.  Playing the role of a virtual Spider-Man was pretty easy to manage and the control was not overly difficulty.  That being said, I did learn early that you can’t rely on random button mashing, as you need to learn Spidey’s movies and how to use the equipment you have at your disposal (your web slinging is man-made).  Swinging through the air is also quite easy to do, as is scaling buildings, jumping from light post to light post, and jumping on moving vehicles.  During our time at E3, Beenox stated that they pulled the camera in closer to Spider-Man in an effort to pull you even more into the game.  I was worried that it may affect gameplay in a negative way, but it did not.  Sure, there were a few camera issues now and then, but given the repertoire of moves that Spidey has in an open world environment, and the fact that the camera had to follow close behind, the issues were not as problematic as I thought they would be.

The Amazing Spider-Man introduces an XP system where everything you do earns you experience points (XP) where you can ultimately upgrade your abilities.  You can upgrade Spider-Man’s web attack, ground attack, artillery attack, power strike, etc.  You can also purchase tech upgrades, which include such things as increasing the rate of your web blasts or improving the elasticity of your webbing.  Upgrading is just as important and learning your moves.  I found that the XP system was pretty cool and something I found was part of the addictiveness of the game, as I wanted to upgrade that one specific attack to see what it could do.

The PS3 version of the game is compatible with the PS Move.  I personally prefer playing with the controller, but I did manage to squeeze in some playtime with the Move and the navigation controller.  Overall, the Move works quite well and I was able to navigate Spider-Man with ease.  Attacks, dodges and basic web slinging are performed without a hitch.  Unfortunately the same cannot be said for “Web Rush”, which is essential to the game.  Triggering Web Rush is accomplished with the L2 button on the Navigation controller.  You then have to point the Move in the direction you want to land.  Although this sounds easy in principle I found the Move reticle on the screen to be hyper sensitive and I had a tough time stabilizing it in the direction I wanted to go in a timely manner.  Perhaps with more time I could master it, but in my playtime I found this aspect the most finicky of the Move functionality.  Overall it just didn’t feel all that natural and left me longing for my controller. 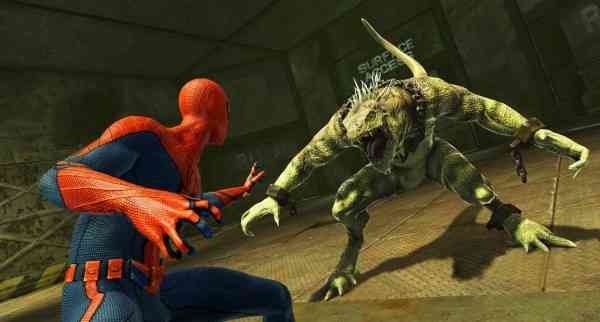 Visually I found The Amazing Spider-Man pretty solid on the PS3.  Something I think most will notice right off the hop is Spidey’s new suit.  There is so much detail found here.  Beenox states that they worked in conjunction with Sony Pictures to get the feel and look of the actual suit that is used in the movie, and it shows.  From the textures, the colours, to the pods on his wrists where his web is fired from, all of it noticeable and quite amazing.  As with the movie, Spidey’s suit will start to show wear and tear from battle and it is up to you to maintain it’s look and repair it when needed.  Of course Spider-Man’s animations are top notch and flying through the air or battling enemies has never looked better.  The acrobatic grace of the main character must be seen to be appreciated.  Of course lets not forget those who Spiderman fights, as they too are well detailed, and the starring villains such as The Lizard, Rhino, or Scorpion look good too.  As for the city of Manhattan, Beenox has done a good job here.  As you web-sling through the city you can’t help but appreciate the work that went into it.  From the people who populate it to the cars that drive the streets, there is a lot of life brought into this virtual world.

Complementing the game’s visuals is the sound.  The music is very noticeable and is very reminiscent of a full blown big picture musical score.  The score amps up when the action gets crazy and calms down when things are subtle and relaxed.  As for the voice work, I found it pretty good.  I don’t know who voiced any of the game’s characters, but regardless of who they are, they were quality actors and they added to the whole experience that the game provided.  Finally, the game’s sound effects are solid, but not overachieving.  I found the sound of spidey’s web hitting enemies or surfaces, the sound of the wind above the Manhattan skyscrapers, to the sound of the hustle and bustle of street below pretty good.  The sound package as a whole is solid and there is nothing to complain about here.

The Amazing Spider-Man is a game that really surprised me, and in a good way.  The open world environment offers a lot of area to explore at your own pace, while the single player story offers up some enjoyable gaming experiences, even though there can be some repetitiveness now and then.  Add to this the side quests and ability to search and find collectibles, and you have a game that can consume a lot of time.  At the end of the day I have no problem recommending The Amazing Spider-Man, especially in a world where so many licenced games based on movies provide a poor gaming experience.