Last month we got a glimpse at the first chapter of Star Control: Origins. With some great voice acting and some interesting possibilities that preview gave, there was reason to be hopeful that the resurrection of the series would be a good one. Interestingly enough, it’s the second long-dormant series to make its return this week alone. Will Star Control: Origins be the return older players had hoped for, or perhaps the perfect introduction to a new generation of potential fans?

This time around things go back to where they all started with humanity’s first venture into the great beyond. After picking up a distress call, you, the player, are dispatched to investigate. What you find is nothing more than trouble though—you might gain some friends and first contact, sure, but you also gain an enemy. That enemy, the Scryve, are set on destroying you and Earth, so along with your new friends, the Tywom, the adventure begins. Once beyond the solar system, however, you find out that there’s a lot more going on than the Scryve, who might be molehills compared to what lurks in the rest of the galaxy. You’ll need friends as you gain more enemies.

The story is good, but it can get rather repetitive at times. Encounters with certain types of aliens seem to yield the same discussions over and over. That can get a bit old, but it certainly does make running into a new species all the more delightful. The main story elements are voiced by an excellent cast that bring the characters to life. That part is really well done and even though some of Earth’s “friends” may grate on you after while, it more than likely that some of them are supposed to. I’m looking at you, squid-face. Regardless, the story arc is the main sell here. 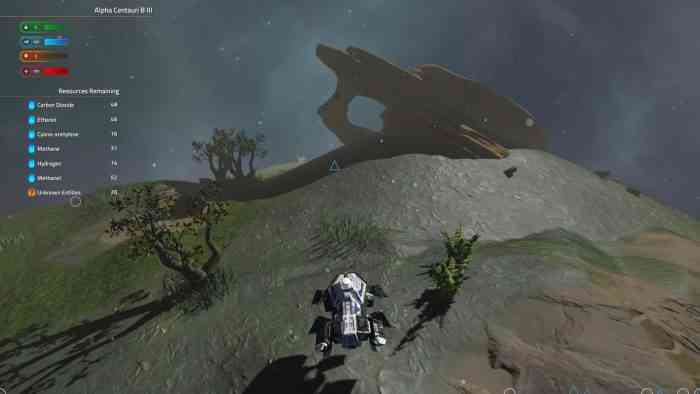 It’s a big galaxy out there and everyone wants you to do something for them first in exchange for help defending yourself. Fair enough. The bulk of the gameplay revolves around a lot of monotonous tasks. When you’re not trying to help out someone else, you’ll be spending a lot of time gathering resources on each and every planet you can find. You’ll be doing both sometimes Landing on as many planets as possible to strip them of their resources is the only way to keep you going no matter who it is you’re trying to win over.

Since landing on the planets and gathering resources can wind up being all-consuming, it’s a shame it’s not more interesting. While there are lots of different sizes, shapes, creatures and hazards to see, you’re still just zooming across the surface to scoop up resources and maybe happen upon some ruins or useful artifacts. The looks changes but the objectives seldom do. There never really seems to be a point where you get ahead and can ease off your constant strip mining of the galaxy either. Upgrading the landers to be able to get some hard to find substances on hazardous planets is great, but again, it’s essentially just the same thing over and over. The grind for resources can get a bit tedious.

So when you’re not strip mining the galaxy there’s combat too, right? Of course, there is! I mentioned in the preview that combat really breaks down into a newer version of Spacewar! (and a homage to the originals). Is that good or bad? Here’s the thing: if you like that, great, there is plenty to be had. If you don’t like that style, however, well it doesn’t have to ruin your enjoyment, either. There is an AI control unit that can be equipped to your main fleet vessel and it will conveniently do all the work for you. Great if that style of combat, or any at all, isn’t your thing. Just be aware and maybe not buy that if you want to be in charge of every move. It’s an interesting solution, to say the least, if it was designed keep players who didn’t like the combat playing. I actually kind of like it that it’s there.

What Star Control: Origins really brings to the table overall is that old school, no hand-holding approach to the overall universe (even if they do give you the option of a helping hand in combat). The Galaxy is a giant sandbox and you decide where to go and when. It will be interesting to see how that plays with everyone. If you need absolute direction at all times, this one might be a little rough for you. It’s not too hard to figure it out—if anything you’ll be so deep in things needing to be done that it will be more of which to do next, not what to do next.

Overall, it’s a decent game. There is plenty of content to go around, but it may lend itself to certain types of players more than others. If you don’t like a bit of grind, it may not go down as well. The story is good, the voice acting is excellent, but the more action-oriented parts feel almost like a more arcadey version of Elite Dangerous (but not like, in a bad way). In the end, Star Control: Origins feels like a game that players will either love or hate.