I have to admit, I never played the first SQUIDS game released in late 2011. I had heard about it, but never got around to checking it out.  Well after my experiences with the sequel, I think I missed something special as SQUIDS Wild West simply brought a smile to my face.

SQUIDS Wild West carries on from the last game, except this time it is held in a Western-themed region which works quite well. Our group of heroes continue their quest to rid the ocean of a black goo menace which is infecting the wildlife and turning them evil. Also, they are seeking out one of their elders in the hopes he knows how to help. 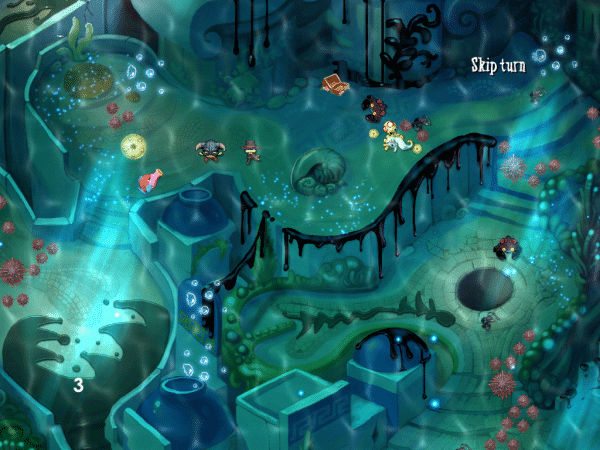 The gameplay is very simple turn-based battles, but comes with some interesting strategy. Your squids go first, then all the enemies, so you need to think ahead a bit. Control wise, you merely pull back with your finger on the squid character in play, aim where you want to go and release. Each squid has a stamina meter and depending on how hard you pull back it will affect how far you propel yourself and use up your stamina meter.

Squids themselves fall into four classes: shooter, trooper, scout, and healer. Shooters can fire a projectile weapon a number of times per turn, but can also do collision damage when ramming into enemies. Troopers are the tank class and have a “stomp” power which inflicts damage to an area around them when used. They also deal a lot of damage when colliding with enemies, but their stamina meter runs out quicker. Scouts, with their high stamina and good distance, are great for exploring the area as the levels often contain hidden items and other things that want to try and kill you. Scouts also have a dash move which is effective for getting to those hard-to-reach areas. The Healer class is interesting because if you want to heal your teammates, you need to actually collide into them. 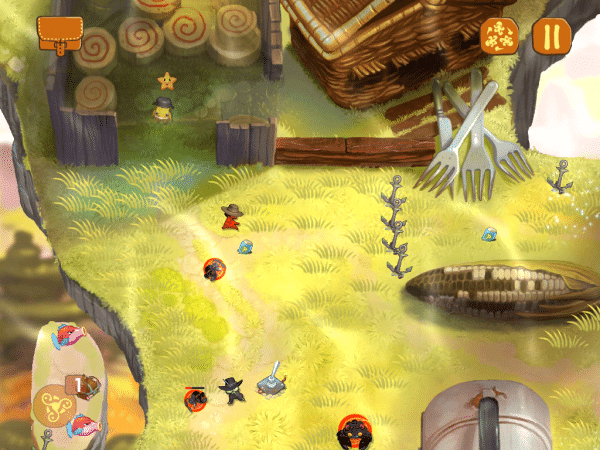 As you progress in the game, you gain additional characters and you can use up to four per mission. The characters can also be upgraded via the game’s store using pearls you acquire after defeating enemies or opening chests. Pearls can be spent on buying your characters new hats or costumes to increase their stats in different ways. You can also use pearls to buy consumable items.  These items can refresh your stamina, revive a dead teammate, or help one who was pushed over a cliff.  Yes, some levels are designed so that if you shoot too far you could send your poor squid over a cliff and they’ll be gone for that mission unless you have the proper item. I do have one small gripe, the aiming can be a bit fussy and I hope they will refine it a bit. Trying to get that proper angle to send your squid into an enemy can be tricky and just being off slightly could mean missing them altogether.

The level design in the game varies quite a bit from very simple to downright evil. You really have to think sometimes before launching your squid into an area you thought was safe, as an enemy could then just bounce them off a cliff. You also have a lot of content to go through. The game gives you 5 chapters, with roughly 40 plus missions. There is also a star system like Angry Birds, where beating the level in a certain number of turns, finding a certain item, or making sure all your squids survive can impact your star rating. 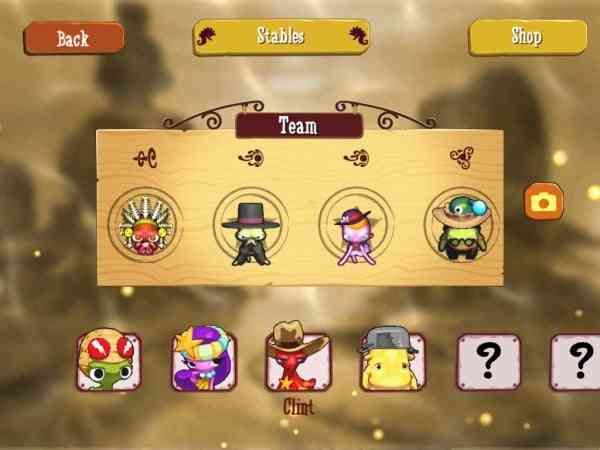 Visually speaking, I don’t think I’ve ever played a game like this that was so easy on the eyes. The game is just so visually appealing that I feel it could be adapted for a Pixar movie.  All the Squids are cute and different enough that they stand out nicely.  Backgrounds are pretty and have good layouts, but often appear a little too static. I would have liked to have seen a bit more animation in them, and kept expecting them to do so. The beautiful music in the game is the icing on the cake. It is composed by Romain Gauthier, who did the music to the original game, and whose credits include Edge, iBlast Moki 2, and Magnetis. I imagine the soundtrack for this sequel will be out soon and I recommend picking it up. Currently the soundtrack for the first game is for sale for only $4 and its well worth the purchase. The music never gets old, and when it loops you don’t really notice it. The sound effects on the other hand could have been better. I’m not saying they are bad but are nothing special.

Overall, SQUIDS Wild West was an enjoyable experience.  When you consider the $2.00 dollar price tag, you really cannot go wrong.  With all the content included in the game, the superb quality of the gameplay, and the fantastic soundtrack, SQUIDS Wild West is one game you should absolutely download for you iPad, iPhone, or iPod touch.