Spy Hunter remains one of my earliest memories when it comes to arcade gaming back in the 1980’s.  I still recall pumping in quarter after quarter at some random arcade in Burnaby B.C. while my Dad went to some hair growth treatment place.  It always took an eternity for his appointment to finish so it was great for me as it allowed me to play the snot out of Spy Hunter.  I still recall the theme song and oil slicking the crap out of enemy vehicles as they rushed up my tail.  When I heard a Spy Hunter game was slated for the 3DS, I was all over it.  Whether it is the theme song or using all the Spy Hunter weaponry on my vehicle, I had some high hopes.  Did Spy Hunter live up to my expectations and let me relive my youth?  Well in some ways it did, but in other ways it didn’t, and in the end I walked away thinking this Spy Hunter game could have been much better.

Much like the original game, you will spend a great deal of time driving from point A to point B.  Spy Hunter does have a story where you play as an agent (I know shocking) and you communicate with a variety of other agents, but in the end the story takes a backseat to driving and enemy battles.  It is truly a race to the end on long stretches of roadway as you fend off waves of enemy vehicles with your Spy Hunter gadgets and weapons.  It is a fairly linear experience and one that can be unforgiving.  Yes, even this Spy Hunter game for the 3DS is a tough game.  Most gamers will have a tough time and this game can definitely test your patience.

Fortunately, Spy Hunter manages to mix things up a bit.  You do some off-road driving and participate in other sequences where your vehicle will turn into a speedboat where you will navigate across water.  There are also other moments in the game where you will control an air drone targeting enemies and you will also manage a turret on the back of a weapons truck.  So I give plenty of kudos to the development team for implementing some variety into the game.  The only problem here is that many of the sequences that take you away from traditional Spy Hunter driving are not polished.  Controlling the drone felt awkward and managing the turret on the back of the truck was frustrating due to some of the poor control mechanics.  Yet much like much like the original game, the sequences always come to an end it is here that you breathe a sigh of relief when you see your weapon truck with the back open ready for you to pull in. 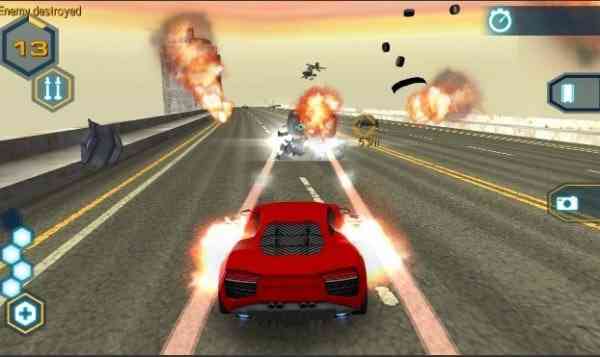 Another issue I had with the game was the difficulty.  There is only one difficulty level and it makes Spy Hunter for the 3DS is a challenge.  I found that it was one of the more difficult games I have played on the dual screened handheld.  It took me several attempts to just complete the first mission.  It is not so much the actual driving that is difficult but rather it is trying to avoid taking damage and being able to take down the enemy in an efficient manner.  The game could have benefitted from throwing in the odd checkpoint or two.  I like a good challenge but having to restart the entire level every time the enemy took me out frustrated me, and after awhile it turned me off the entire experience.  Having to replay 3-5 minutes of gameplay over and over again just felt like I was wasting a colossal amount of time.  It really makes me wonder if this was intentional or an oversight.  Surely if the game had been play-tested focus groups would have commented on the lack of checkpoints and the difficulty level.

There are performance achievements and a beefy list of upgrades as you play.  So there is some replay value.  The variety in terms of the weapons is pretty good and all the weapons respond as they should.  The proximity mines were my personal favorite but I also enjoyed deploying the game’s missiles towards incoming enemies.

Control wise, Spy Hunter is a bit of a mix bag.  Accelerating is accomplished with the R button and breaking with the L button.  The X button controls your weapon in the front and B button controls the weapon in the rear.  The Y and A buttons control your weapons on the sides.  The default configuration was bang-on and certainly made a lot of sense once you jump into a game.  When you have an enemy ahead of you it felt natural to hit the X button.  There is however a bit of a leaning curve when it comes to controlling your vehicle with the circle pad.  It is very sensitive and if you over compensate you will end up going bumper first into a wall.  The vehicle control does not feel that natural and can best be described as over sensitive.  I would be very curious to see how Spy Hunter handles on the Vita, as Spy Hunter was released on this console, and if controlling with dual sticks is the way to go. 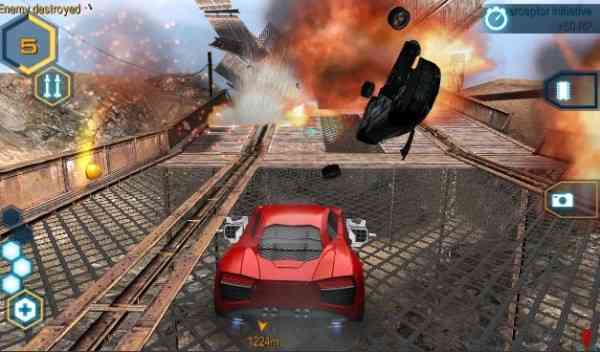 Visually, Spy Hunter is a not a bad looking game.  When you take into consideration the limitations of the 3DS hardware, the developers did a pretty good job at creating a game that visually stays true to the original.  The vehicles are nicely designed and the game’s environments feature a decent level of detail.  Some of the games explosions are impressive and the games menus do look sharp.  That said, I did notice a lot of clipping issues.  I also noticed some slowdown when the action became a little chaotic on screen; however, for the most part the game ran without a hitch.

In terms of the games audio, I was absolutely disappointed.  Granted the 3DS is not a power house when it comes to how games sound on those tiny 3DS speakers; nevertheless, I just expected so much more.  For starters the game’s music was a letdown.  The only semblance of the original Spy Hunter theme song is heard when you first fire up the game or during some of the menus.  It is a modernized version of the song and frankly I hated it.  During the actual gameplay, the sounds of engines revving and weapon blasting dominate and unfortunately it just sounds awful.  I found that in no time flat I was listening to the music on my iPhone.

Overall, Spy Hunter for the 3DS is mostly a forgettable experience.  Wrestling with the games controls, the lack of in-game checkpoints, and less than stellar audio all made for a game that falls flat.  There are things that Spy Hunter manages to do well but it the end the bad merely overshadows any good in this case.