Spectra Review – Stylish Racer Will Get Your Blood Pumping

The racing genre tends to take some different shapes, but Spectra is a unique entry that stands out due to its adrenaline-filled soundtrack and pleasing visuals. The most similar title that it could be compared to would be Audiosurf, but where the former builds its tracks off your music, Spectra aims to provide procedurally generated tracks to keep the challenges coming.

The game handles well, but a controller is recommended, as it feels a little more tactile and easier to maneuver. There are plenty of ways to rack up the score, and as you collect dots, blast through score multipliers, and graze barriers for near misses, your skill dictates just how high your total will soar. As I was just getting into the game, I was sticking solely to gathering the yellow dots. The more comfortable I grew, the bolder I was going with each attempt to top past scores. I was skimming barriers and even using the speed boosts to skim off the track briefly, allowing me to pick up a few extra points while dodging some particularly tight turns. Overall, the game handles quite well for the most part, and the ability to continue gathering points in multiple ways is enhanced by the amount of replay value in this title.

The game comes with ten stages that you unlock. You can open them up via completing the level, or even just by hitting a certain threshold, so even if you fail, you can still progress. Once you unlock the initial run, you get access to Hardcore Mode, and it certainly lives up to the name. I found myself having more trouble with the remixed version of the first level than the final level in normal mode, and I look forward to seeing just how crazy the final level on hardcore will be.

Each level has a wonderfully crafted chiptune track by well-known artist Chipzel, and each level has its own tone. It appropriately ramps up as you get further into the game, with the later stages having some of the most enjoyable music in the entire game. It fits the atmosphere of the game, and its strong use of music is another key point that I don’t want to understate. This game’s soundtrack is damn good.

“All my complaints with the gameplay aside, Spectra is a very well-crafted love letter to similar titles of old, and to see some developers still aim to make a game legitimately challenging without feeling unfair is refreshing to see.

That’s not to say the game doesn’t have the occasional flaw, though. I feel like the barriers on the track are a bit TOO close together. Some of the later levels seem to have to require you to pull off some very precise turns, and you can easily lose a big score chain, with it feeling a little out of your control. This luckily isn’t a common trend, thanks to tracks being procedurally generated, but they still occur, and it’s still annoying in how it can really ruin a run.

The game itself handles well enough for the most part, but as I was using my controller, I found myself constantly readjusting the position due to the floatiness of your ship. The argument could be made that it adds to the challenge, but in a game like Audiosurf, you are locked to multiple lanes, making twitch movements a snap. It is ultimately more rewarding in Spectra’s case to collect all the dots in a tough section without losing your score, but I would have liked to see the controls given a little more fine tuning. If you’re designing the game to be a twitch racer, the handling should be precise, which isn’t quite the case with Spectra. 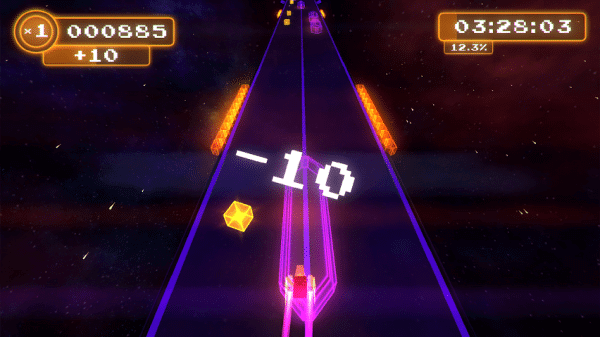 Control gripes aside, I’m quite impressed with Spectra. The high-quality audio, the simple, yet surprising depth of gameplay, and the clean visuals all come together to provide a title that should provide plenty of enjoyment to those who opt to purchase it. My only concern lies in what sort of ways they can improve the game even further. I’d love to see more content for the game, but barring more tracks from Chipzel, I’m not sure how they can provide more content down the line. I do hope that they plan to continue support for the game. There are only ten tracks in Spectra, and as much as I’ve raved about the music, it will eventually get a little dull. More variety on that front would be a very welcome addition. All my complaints with the gameplay aside, Spectra is a very well-crafted love letter to similar titles of old, and to see some developers still aim to make a game legitimately challenging without feeling unfair is refreshing to see. 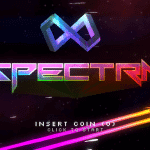 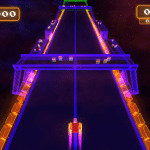 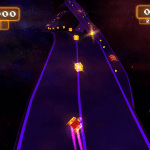 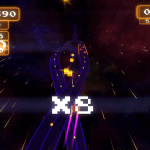 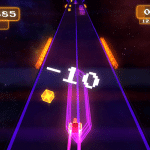 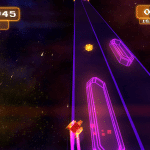 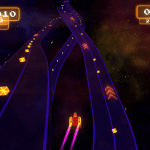 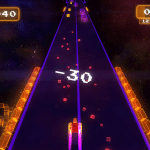 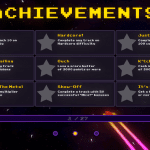