With its latest update, Skyfront VR finally soars out of Early Access, bringing a new map and a progression system into the fray. Despite the addition of new content, however, developers Levity Play fail to address the core issue of this multiplayer arena shooter: it simply isn’t very unique. In a market already saturated with shooters of all kinds, Skyfront VR plays it safe, avoiding the creative risks necessary to rise above the pack.

Skyfront VR is a multiplayer FPS revolving entirely around blasting enemies while boosting around in zero-gravity. Movement is accomplished via the thrusters you have in each hand, which can also deploy grappling hooks to tether you to a surface or help you bank around corners at high speed. To shoot, you have to put away the thrusters, essentially leaving yourself wide open to attacks. This makes for plenty of great tension, as you must constantly weigh the risk and reward of offense and defense in every scenario.

Fatigue Begins to Creep in Quickly

Unfortunately, that’s about Skyfront VR’s only stroke of brilliance. Of the three game modes, none capitalize on the premise of boosting around maps Quidditch style. There’s free-for-all deathmatch, team deathmatch, and domination, all of which feel more at home in your typical shooter. When each game mode boils down to simply shooting foes until they drop, fatigue is bound to set in sooner or later.

Similarly, while the four maps vary wildly in appearance and atmosphere, they add little complexity to the gameplay. As you can’t grip onto and maneuver along surfaces like in Echo Arena, the architecture is rarely ever used as cover in battle. Instead, they pose only as obstacles you must fly around. No matter which map you play on, gunfights always take place in the open air, ignoring much of the environment. Furthermore, it doesn’t help that themaps themselves lack in visual fidelity. Even when playing on the high graphics setting, textures are noticeably bland and undetailed.

In terms of controls, Skyfront VR takes a strange turn. Whereas shooters generally use the analog sticks for movement, here they are used for to swap between equipment. Press up for thrusters, left and right to switch guns, and down for a special ability. This allows for speed when swapping items, but the downside is that it is really easy to accidentally equip something you didn’t mean to. With the analog sticks taken, snap turning is instead relegated to the face buttons, a change I was never able to get used to. It’s admirable for the developers to try out a control scheme so different from the norm. In this case, however, I’m not sure if it works for the better. 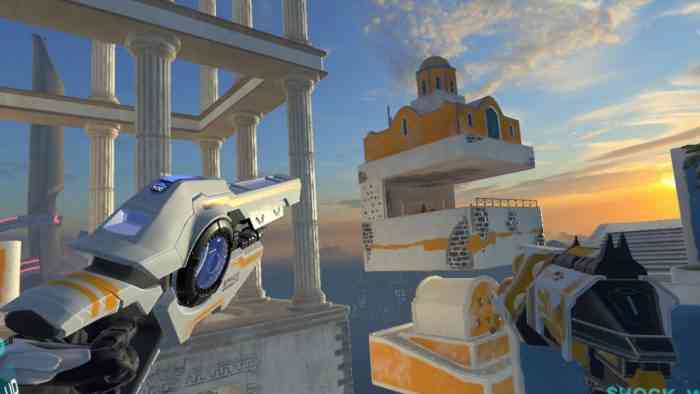 All this isn’t to say there isn’t any enjoyment to be had in Skyfront VR. There’s a wide selection of weaponry to toy with, from the shotgun to the grenade launcher. It’s particularly satisfying to nail a long-distance headshot with the revolver, which guarantees an instant-kill. But the fun is short-lived, fading with the initial novelty of flying around the weightless arenas. Beyond that, there isn’t enough depth or standout qualities to any of Skyfront VR’s mechanics to truly hook in a player. The progression system in particular comes off as an afterthought, rewarding minor cosmetic colour changes with every level. Matters are made worse by the shortage of concurrent players. Matches support up to ten players, yet the most I ever found at a time was six.

Skyfront VR is a perfectly serviceable, run-of-the-mill shooter, bearing little difference to the ones you’ve played many times before. The developers miss an opportunity here to expand and innovate upon the idea of zero-g arena combat, lending to an overall feel of “been there, done that”. When there are already so many VR shooters available, most of which, for better or worse, try to push the boundaries of the medium in their own ways, one may find it difficult to justify spending money for “perfectly serviceable”. 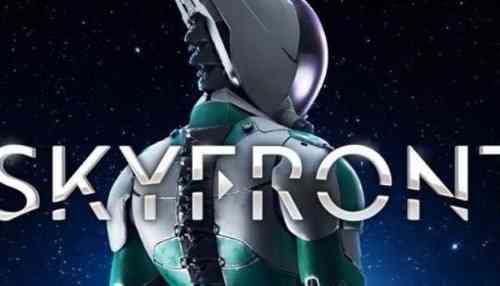