Rhythm Fighter is a roguelike side-scrolling action adventure combined with elements of a rhythm game that involve keeping to a beat while fighting mutated vegetables. It may sound like a lot is going on – and trust me, there is so much happening on screen – but it is quite easy to get the hang of. With loud catchy tunes and lights that pulsate with every boom and pow, your task is to move and defeat monsters while staying relatively on rhythm. It is a colorful title that comes with its own set of challenges, but its seriously butt-kicking music make the adventure so effortless to enjoy.

The background story for this game is cartoonishly hardcore, with kooky vegetables being controlled by an evil commander on a ploy to destroy the world. To stand against this absurdity, the mysterious Mr. Disco used his beat energy to revive one of our fallen heroes, a renegade animal capable of wielding weapons to chop and slice our enemy vegetables. Utilizing weapons and items found scattered in a randomly-generated playing field, we collect more beat energy to unlock more characters and accomplish tasks to earn trophies and save the day. It is not the most interesting plot, but it serves enough reason to keep going and to beat up some legumes.

When you first pick up the controller to play Rhythm Fighter, immediately you are introduced to an array of actions and tasks to complete. With barely any time to read what the instructions are telling you to do, you are thrown into the mix where villainous vegetables come up to slap you, shoot things at you, and explode when you’re nearby – as if we needed another reason to hate vegetables. While all of this is happening, a tutorial in the form of a speech bubble is quickly exiting the screen and you are left to a meaningless brawl with funky enemies and a lost narrative. It isn’t the most friendly tutorial in the world, but after a couple of runs on your own (and the Nintendo Switch only has so many buttons to choose from), it gradually becomes easier to handle. 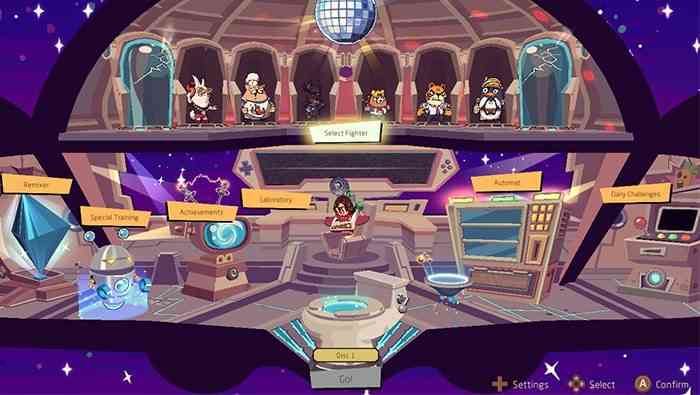 In order to progress to the next section of your selected stage, you must defeat all the enemies within your reach. There are many ways you could do this, from mashing one button to perform melee attacks or using powers that you randomly picked up. Being a 2D horizontal action game, you have the option to move left and right as many times as you wish as long as you move on beat. Once you defeat all the vegetables in your area, you can take a look at the map in the corner to see which areas are new to investigate. There is also a function to teleport your character back to previously explored places, making it easy to go back and forth without walking too much. Some parts may lead you to a store, a treasure chest, or even a boss fight, and with handy symbols it is easy to avoid certain areas until you are prepared.

Battles are no easy task because there is also the rhythm aspect of the game that you have to consider. It is already challenging enough to hold back a punch because the beat of the song may be slower than preferred, but with each movement and action you make, it is highly encouraged that it is done on beat. There is no punishment if you don’t do well and punches will still land if you end up having a terrible sense of rhythm, but it is less beneficial for you if you don’t try. It is difficult because there is so much happening at once, so mastering the art of moving, dodging, and fighting on beat is a tough challenge. 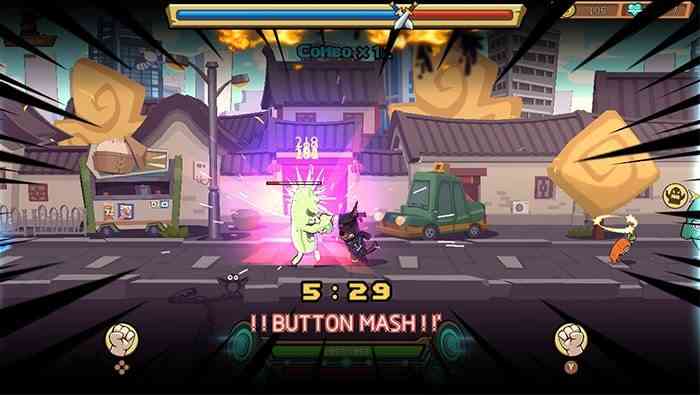 The game is quite fair as it doesn’t only rely on your hearing senses to get the beat right. There are lights at the bottom of the screen that flash to the rhythm, making it a visual cue for those who may struggle with hearing. It can be distracting since the game itself is already so bright and colorful, and to add to the vibrancy can be visually overwhelming. However, this allows many to be able to enjoy the game without having to actually listen.

Because of its random nature, Rhythm Fighter offers awesome replayability if you can overlook its repetitiveness. Every time you start a new game, the stage you enter is slightly different from all the other ones you’ve played. This means you could battle with only your bare fists in the first round, and you might get lucky and find kickass weapons in the next. The actions and movements remain the same, so while it is certainly not a game to play continuously for hours, it is definitely a great choice to pick up for quick fun.

Rhythm Fighter provides an interesting concept and although the beginning is overwhelming, it is an enjoyable and forgiving experience. You don’t need much sense of rhythm or direction, making it a friendly experience for many. It starts to become repetitive despite the battlefield being randomly generated, but its catchy music encourages you to pick up the game again and again. 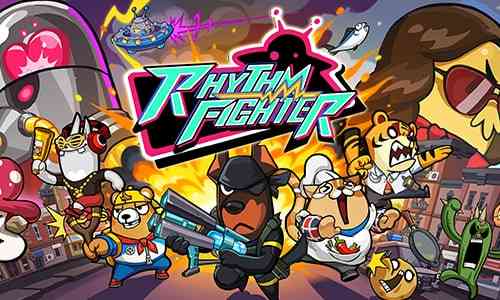