Aside from Mario and pressure from our Editor, the Professor Layton series is one of the main reasons that I own a DS and now a 3DS.  If you have not played the series before, Layton games are all about solving a series of mind-bending puzzles integrated into a point-and-click style adventure story.  I really enjoy gameplay like this that forces you to think and solve things but this is the first time I came away from a Layton game not entirely impressed.

Professor Layton and The Miracle Mask represents at least the fifth game of the Layton series and is the first of the series to debut on the 3DS.  I have reviewed every one and have found myself becoming increasingly critical of the same formula being used over and over again.  I really felt that the game needed an injection of something to make it fresh again.  With the 3D capabilities of the 3DS, I was very intrigued about what Level 5 could do with the technology. 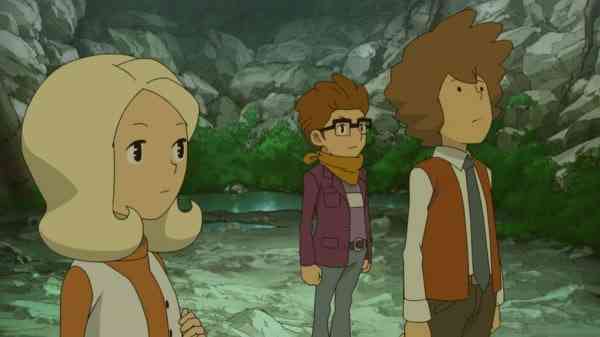 While the core formula in Miracle Mask stays true to the rest of the series there is an entirely new gameplay interface called Investigation Mode.  This mode replaces all of the tapping that was required to search areas in previous games.  Instead players simply just drag a magnifying glass around the touchscreen by use of the stylus and touch screen.  Points of interest that are interactive highlight the magnifying glass in orange.  This certainly makes it far easier to find hint coins. I far prefer this method of searching areas over tapping the screen madly.  Occasionally the magnifying glass will turn blue instead of orange.  This represents areas that can be zoomed in on for further investigation.  What is also great about this new system is that you don’t have to endure several pages of character conversation if you don’t want to when you tap on points of interest that aren’t coins or puzzles.  Doing this in previous games bothered me to no end.

While the story that flashes back in to the past is interesting enough, my greatest enjoyment of Layton games comes from the puzzles. Five games in to the series, players are bound to see some puzzles that look a bit familiar. I found less reptition in this game than I have in the previous two.  Despite the move to a 3D capable platform, puzzles play exactly the same as the most recent Layton game.  If you need help, coins that you find can be used to get hints with a final super hint that costs even more and basically gives you the solution to the puzzle.  You still earn points and getting puzzles wrong result in a diminished number of points when you do successfully solve the puzzle.  Several puzzles simply are trial and error exercises with no need to use hints or even risk getting the puzzle wrong.  These ones left me scratching my head a little bit because they aren’t consistent with the points and hints system.  Perhaps this is a little bit of respite because there are still some puzzles that defy all logic and end up being nothing more than exercises in trial and error.  These puzzles can be a real buzz kill, hurt the overall experience and will most definitely frustrate many.

The mini games included in Miracle Mask are among some of the best I remember in the series.  They’re fun, relatively easy to learn yet provide a good challenge in later levels.  Some of the mini games in previous iterations angered me with their difficulty (the tea brewing one for example) and spartan rewards for completing them.  Also there are new free puzzles available for download every day for one year following the game’s release.  When you’re done with the story it is always nice to come back to the game weeks or months later and have a whole suite of new content to play. Between this and the several hours it takes to get through the story give Miracle Mask undeniably long legs. 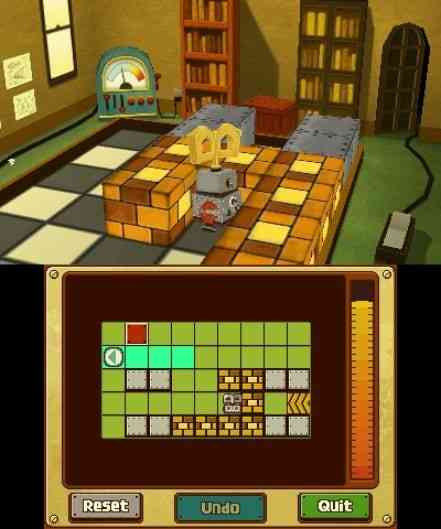 Aside from some enhanced 3D effects, the look in Miracle Mask remains the same as previous games.  The certain cut scenes that do feature character animations, the transition screens going in to puzzles and the win/lose screens after puzzles all certainly do look good with the added depth of 3D.  Other than that everything looks unremarkably the same. The series’ unique look holds it back from really taking advantage of the added power the 3DS offers. I was hoping the puzzles would leverage the 3D in ways that freshen up the experience.  Several puzzles are enhanced by the 3D but these are still solvable with the 3D effects turned off.  I understand the need for this because of the 2D options but it still feels to me like an opportunity missed.

Also no different is the sound which remains virtually unchanged from previous games.  The quirky soundtrack (which I enjoy) is still intact and voice acting is still limited to only certain cut scenes but not all of them. Players are required to do quite a bit of reading here. Other than that Miracle Mask sounds exactly like every other Layon game I have ever played.

From a technical standpoint Professor Layton and The Miracle Mask is a decent game. While some puzzles are enhanced by the 3D capabilities of the hardware, the gameplay formula has changed very little save for the new investigation mode.  That being said, the mini games are some of the best in the series.  Yet as someone that has played all of the Layton games I have to admit I was hoping the move to the 3DS would have injected a bit more life into the series to keep fans like me a little more interested.