The struggle between man and beast is timeless, and in videogames it is no different. In this case we are talking about creatures that walked the earth millions of years ago: dinosaurs. Circle Five Studios brings us a multiplayer experience which pits man against these impressive beasts in team combat. You can play as a human or as a dinosaur – but is there enough to hold your interest, or will you find yourself bored back into the prehistoric era?

Primal Carnage: Extinction is a multiplayer shooter which can pit human against dinosaur or dinosaur against its own kind. On one side you have the humans, of which there are five classes: pathfinder, scientist, commando, pyro, and trapper. Each comes with their own unique weapons and look. You can unlock new skins and add-ons as you play to make yourself a bit more unique. They all play similarly, except for the weapons they start with. People who are familiar with first person multiplayer shooters will feel right at home here. There is something for everyone and their style of play.

On the other side you have the dinos where there are nine different kinds to choose from. Some of the more popular dinosaurs are represented, such as the T-Rex, Novaraptor, and Pteranodon. Each has their own strengths and weaknesses – some are fast but don’t do much damage, while others are hulking beasts that can do major damage, but hard to control. That is one thing that frustrated me about some of the dinos: it can be like trying to drive a large truck in a small space. Also you are in third person view when you are controlling these overgrown lizards. It is still fun, but remember to choose your dino carefully to suit your style of play and stay out of areas on the map where you could get cornered!

Before diving into a game you will have a few choices of gameplay to choose from. You have your standard death match, which pits a team of dinos and a team of human against each other – whichever team racks up the most kills withing the set time limit wins. If you want a pure dinosaur experience you can have two teams of viscious lizards going at it. This mode was rather amusing to watch when I spectated a few times. Another fun mode is “Get to The Chopper”. Here your goal as a human is to gather resources you need to repair your helicopter to get off the island before you become dino chow. One other mode which caught my interest is the “Role-play” server. Here there is no fighting, you can just pretend and hang out with other people pretending to be dinosaurs. Normally you don’t see something like this in a game meant for straight-out combat so it was kind of refreshing to see. Along with everything else the game has to offer there, is a small but growing in-game store where you can buy items such as skins for real-world money. There is a pretty good selection so far, but I’m not sure if I’m the kind of person who would drop a few dollars for a dinosaur skin. 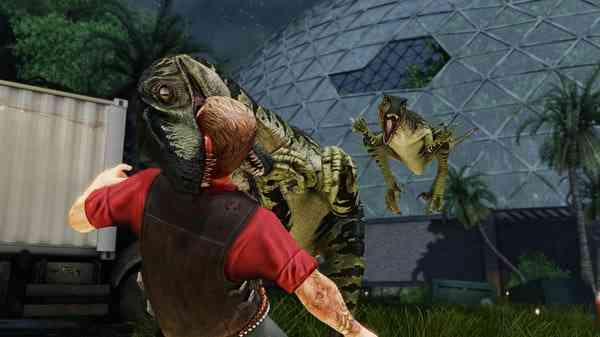 I have to admit when it comes down to the look of the game, the developers nailed it in every area. The dinos are beautiful and are animated perfectly. They definitely took their time with the models and made them right. Stomping around the maps as dinosaurs is great fun. The same goes with the human models with visuals that look like it could have come from Valve. Maps are well designed, bringing you the normal locations you may expect from a multiplayer game such as jungles, forests, docks, an airbase, and even winter maps.

On the audio side of things everything seems to be in order. Dinosaurs sound awesome, from their roars to the stomping of their feet, which just adds to the pleasure playing as them. The rest fits perfectly from the ambience of the maps and the music in the menus. I rather liked the music as a whole.

So when the dust has finally settled, Primal Carnage is a fun dino romp for fans of these giant (and not-so-giant) lizards. It doesn’t really bring anything else new to the table in the team deathmatch genre, but what it does bring, it does it well. All it really needs is more people playing to get it off the ground. RAWR!